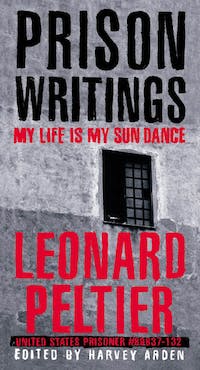 In 1977, the renowned Native American leader/activist Leonard Peltier received a life sentence for the murder of two FBI agents. He has affirmed his innocence ever since—his case was made fully and famously in Peter Matthiessen's bestselling In the Spirit of Crazy Horse—and many remain convinced he was wrongly convicted. This wise and unsettling book, equal parts memoir and manifesto, chronicles Peltier's life in Leavenworth Prison in Kansas. Invoking the Sun Dance, in which pain leads one to a transcendent reality, Peltier explores his suffering and the insights it has borne him. He also locates his experience within the history of the American Indian peoples and their struggles to overcome the federal government's injustices.

"It would be inadequate to describe Leonard Peltier's Prison Writings as a classic of prison literature, although it is that. It is also a cry for help, an accusation against monstrous injustice, a beautiful expression of a man's soul, demanding release."—Howard Zinn, author of A People's History of the United States

"Listen to this fresh, brave voice, then inform yourself about the shameful case of Leonard Peltier."—Peter Matthiessen, author of In the Spirit of Crazy Horse

"This book takes the reader on an emotional and spiritual journey as Leonard Peltier's surprisingly hopeful reflections make the terrible injustice of his imprisonment for 24 years even more difficult to accept. Peltier's important journal details his trial and conviction which was based in part on admittedly false testimony and evidence so inconclusive that reasonable people everywhere have concluded that he should be granted clemency."—Wilma Mankiller, former chief of the Cherokee Nation, and author of Mankiller

"If you decided that you would read one book for the rest of your life, Prison Writings should be that book. It is a book that will move you to stand up against injustice. It will change your views about life and the lives of future generations."—Portland Alliance

"At long last, we hear Peltier's own voice, coming to us loud and clear from inside a nightmare world."—St. Petersburg Times

"Leonard Peltier's words reveal a wise man who has become freer than his captors, despite his false imprisonment for a crime he did not commit. His thoughts here remind us of our true mission as Indian people, as human beings here on this humble, beautiful planet. These thoughts cannot be captured or locked behind bars, or destroyed by gunfire. They fly free."—Joy Harjo, Muskokee poet and musician, author of The Woman Who Fell From the Sky

"If you care about justice, read this brave book. If you care about the perpetuation of the white man's justice against the Native American, you must know the Leonard Peltier story."—Gerry Spence, author of Give Me Liberty!

"For too long, both Leonard's supporters and detractors have seen him as a metaphor, as a public figure worthy of political rallies and bumper stickers, but very rarely as a private man who only wants to go home. I pray this book will bring Leonard home."—Sherman Alexie, author of Indian Killer

"A deeply moving and very disturbing story of a gross miscarriage of justice and an eloquent cri de coeur of Native Americans for redress and to be regarded as human beings with inalienable rights guaranteed under the United States Constitution, like any other citizens. We pray that it does not fall on deaf ears. America owes it to herself."—Desmond M. Tutu, Archbishop Emeritus of Cape Town, South Africa, and Nobel Peace Laureate

"American Indian Movement (AIM) activist Peltier, arrested more than two decades ago on charges stemming from conflict with the FBI on the Pine Ridge Reservation in South Dakota, has become a symbol of the oppression of Indians and other indigenous people. Indeed, he is perhaps the most famous inmate in the U.S., regarded by many as a political prisoner, with Robert Redford, author Peter Matthiessen, former U.S. attorney general Ramsey Clark, and others calling for his release. He remains incarcerated, often in horrific conditions. As if engaged in the sun dance, in which apparently unendurable sufferings are embraced as a spiritual testimony, Peltier writes of his life, before and behind bars, with anger but not rancor. Since his youth as a warrior, he has become a spiritual elder whose words offer much to Indians and non-Indians alike. 'We don't need more prisons,' he writes. 'We need more compassion. That compassion is our own highest possibility.' His own simple, eloquent compassion for his captors as well as himself makes this a remarkable and moving book."—Patricia Monaghan, Booklist

"Part manifesto, part memoir, a standout collection by the celebrated, long-imprisoned American Indian Movement co-founder and activist. Peltier, a Sioux Indian, has been in federal prison since 1977, convicted of killing two FBI agents during the 1973 siege at Wounded Knee, S.D. Peltier asserts that he did not commit these murders, writing simply, 'Innocence has a single voice that can only say over and over, I didn't do it. Guilt has a thousand voices, all of them lies.' (In his preface, former attorney general Ramsey Clark makes a compelling argument for why we should believe Peltier, a case also made by Peter Matthiessen in his much-litigated book In the Spirit of Crazy Horse). In this anthology, Peltier charts the course of his activism, describing his evolution from a young man on a South Dakota reservation who wanted what other young men in his circumstances wanted—a car, a job—to a political organizer keenly aware of the injustices visited past and present on Americas indigenous peoples . . . Peltier has much to say about American Indian politics, a dauntingly complex set of issues; among other things, he insists that the US government follow a Canadian model in offering reparations for historical wrongs. He also advances the plausible view that the siege at Wounded Knee was a sideshow meant to disguise a deal through which a uranium-rich portion of the Pine Ridge Sioux reservation was ceded to the federal government. Writing more personally, Peltier recounts the intricacies of living behind bars. As a houseguest in hell, he writes, you learn that the devil has many mansions, and you keep shuttling between them for no known reason. An important contribution to Native American letters, sure to stir both controversy and renewed attention for Peltier's ongoing quest for freedom."—Kirkus Reviews

Leonard Peltier emerged as a Native American leader in the 1960s, was arrested in 1976 in Canada and extradited. He has been in prison ever since and is now confined at Leavenworth. Prison Writings is his first book.

Harvey Arden is the author and co-author of several books, including Wisdomkeepers and Travels in a Stone Canoe (both with Steve Wall) and Noble Red Man. He lives in Washington, D.C.