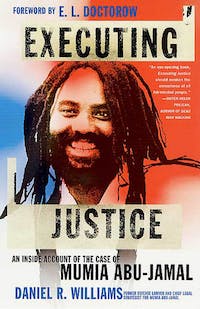 Mumia Abu-Jamal is an award-winning journalist and author of three well-received books and many essays. He is also a death-row inmate, awaiting execution in Pennsylvania for allegedly killing a police officer in 1981. For many around the world, he is an inspired leader and the centerpiece to a revived progressive movement critical of our justice system and escalating global economic inequities. For others, he is a cold-blooded killer who has duped millions, including a vast array of Hollywood celebrities, writers, intellectuals and world political leaders, into believing that he is a political prisoner falsely imprisoned. Whatever the outlook, he and his case have become a flashpoint in the ever-raging debate over capital punishment in this country and a symbol of what is wrong with our criminal justice system.

Here, for the first time, the story of Mumia Abu-Jamal's trial and his struggle to gain his freedom has been told. Executing Justice takes us inside the courtroom where a fierce and skilled prosecutor wove a damning narrative of a young black radical who brutally murdered a young white police officer in the red-light district of Philadelphia, and then later boasted about the killing. It was, the prosecutor said, the strongest murder case he's ever tried. Daniel R. Williams, defense lawyer and chief legal strategist for Mumia Abu-Jamal, invites us to ask: why has this case engendered such enormous attention and aroused the passions of people worldwide?

Executing Justice is the story of how the death penalty really works in this country—not from the perspective of appellate judges, academics, or politicians who pontificate about the pros and cons of capital punishment, but from ground zero, within the pit of the courtroom where the war over life and death is fought. It is also a story of one of the most remarkable trials in our history. Above all, Executing Justice is an honest, at times confessional, book that seeks not to preach, but to raise questions about what we expect from our legal system and the depth of our commitment to capital punishment as a form of executing justice.

"An eye-opening book, Executing Justice should awaken the conscience of all fair-minded people."—Sister Helen Prejean, author of Dead Man Walking

"Executing Justice lives up to its promotion as an insider account, revealing strategy differences and discussions of factual and legal issues."—The Washington Post Book World

"One of the most important books on race in America. A powerful indictment of a highly flawed criminal process, Dan Williams' jewel of a book convinced me that Mumia Abu-Jamal is innocent."—Martin Garbus, First Amendment lawyer

"Dan Williams is a true warrior for justice, and in Executing Justice he gives us a passionate, compelling account of an extraordinary case that deserves attention from everyone who cares about justice in this country."—Gerry L. Spence

"Dan Williams cuts through the verbal warfare to illuminate the troubling issues in this polarizing death penalty case. Beautifully written, Executing Justice is a welcome antidote to the histrionics of the Mumia Abu-Jamal controversy."—Alan M. Dershowitz, Professor, Harvard Law School, and author of The Genesis of Justice

"History will judge our commitment to equal justice for all by how the case of Mumia Abu-Jamal is handled. In a sensitive and balanced account of the trial of Mumia Abu-Jamal and his struggle for justice, Dan Williams shows us why the machinery of death must not continue to grind away our most cherished values. Executing Justice is an important and eloquent exploration of a distinctly American tragedy."—Rev. Jesse Jackson

"I have no idea whether Mumia Abu-Jamal is innocent or guilty. What I know is that the process by which he was found guilty is deeply flawed."—
bSalman Rushdie

"Every generation should have a moral assignment, and one of ours must be justice for Mumia Abu-Jamal."—Ossie Davis

"Despite the deluge of books about the sensational murder case of activist-journalist Mumia Abu-Jamal, none is as comprehensive or as forthcoming about the tangle of legal maneuvers and missteps in his controversial trial as this one is. Williams, the death row inmate's defense lawyer and chief case strategist, offers a slew of previously unrevealed details about the lengthy battle to appeal Abu-Jamal's 1982 conviction for the murder of a Philadelphia policeman. After an impassioned foreword by E.L. Doctorow, the book embarks upon a relentless analysis of the facts of the case that has captured international attention and drawn widespread support. Williams attacks the Pennsylvania courts' refusal to grant an appeal by systematically picking apart the testimony of the prosecution's key witnesses a former prostitute, a young white man on probation and two eyewitnesses who could not positively identify Mumia as the shooter. Williams confronts what he sees as 'irregularities' in the convicted prisoner's supposed confession, as well as in the ballistics and medical evidence. His measured and detailed discussion also puts the case into the broader legal context of Philadelphia politics during the civil rights era and racial biases in death penalty litigation in America, pointing out shortcomings in the jury selection process, for example. Possibly most startling is Williams's careful chronicle of Abu-Jamal's trial and ensuing appeals, which provides a far more thorough view of the proceedings than previous accounts. While no one opposed to Mumia' s radical beliefs will be completely swayed by this book's findings, Williams's terse and lengthy arguments raise intriguing questions about how justice has been served in this high-profile case and should challenge many readers' preconceptions."—Publishers Weekly

"The case of black journalist Abu-Jamal, convicted in 1982 of murdering a Philadelphia policeman, has stirred ardent advocates, pro and con. Against him are law and order advocates pushing for the execution of a cop killer. His advocates, who include noted writers and actors, raise concerns about racial justice. In this book, Abu-Jamal's defense attorney weighs in on the legal and social ambiguities of his case. Williams got involved in the case in 1992. He details Abu-Jamal's Black Panther background and the political atmosphere of Philadelphia, whose police resolved conflict with MOVE, a radical black nationalist group, by firebombing its headquarters, but he focuses on the legal issues surrounding whether Abu-Jamal received a fair trial. Williams steers clear of issues of guilt and innocence as he looks at the fault lines at the intersection of racial politics and criminal justice . . . An accessible book, one that shows, too, Abu-Jamal's passionate commitment to speaking for the voiceless and powerless. "—Booklist

Daniel R. Williams; With a Foreword by E.L. Doctorow

Daniel R. Williams was Mumia Abu-Jamal's defense lawyer and chief strategist for eight years. He has been involvd in many high-profile criminal cases, both as a trial and appellate lawyer. Awards for his work include the Thurgood Marshall Award and the Morton Stavis Memorial Justice Award. He lives in New York City.