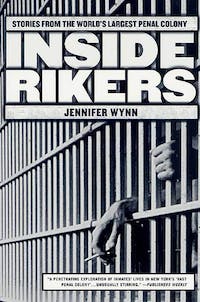 Rikers Island—just six miles from the Empire State Building—is one of the largest, most complex and most expensive penal institutions in the world, yet most New Yorkers couldn't find it on a map. Jennifer Wynn, the director of a unique rehabilitation program at Rikers—Fresh Start—takes readers into the jails and then back out, to the communities where her students were born and raised. She chronicles their journeys as they struggle to "go straight" and find respect in a city that fears and rejects them. Moving stories from a handful of ex-cons who have transformed their lives offer hope to a crime-weary public and to former prisoners in search of second chances. Interviews with leading criminologists shed light on the motives of urban offenders and explain why nearly 75 percent of Rikers inmates return to jail within a year of being released.

Inside Rikers also captures voices from the other side, the eight thousand correction officers who earn their living "on the Rock," as the inmates call it, and why many believe that they, too, are "doing time." Having earned the respect of correction officers, inmates and officials alike, Wynn describes how the New York City Department of Correction, under the leadership of Police Commissioner Bernard Kerik, former Commissioner of Correction, transformed Rikers Island from one of the world's most violent jails into one of the safest.

"A passionate and stirring book, narrated with great power and vividness of detail, and with consummate respect for those whom it portrays. A deeply humane and morally important work that ought to be required reading for our national and local civic leaders. I read it with tremendous admiration for the author's honesty and courage."—Jonathan Kozol, author of Amazing Grace and Ordinary Resurrections

"Seeing how socioeconomic inequality, the aftershocks of lingering racism and shortsighted corrections policies play out in these men's lives gives this book emotional power and political relevance, particularly at a time when the penal system is lurching ever more toward punitive warehousing at the expense of rehabilitation . . . Wynn demonstrates, time and again, how the taint of a jail term forever dooms these men to be defined by their 'single worst deed' and to be sucked into a sadly preventable vortex of recidivism . . . [Their stories] stand as eloquent and damning testimonies to the cycle of jails and lives gone avoidably wrong and our inability to break it."—The New York Times Book Review

"Jennifer Wynn has written an insightful and moving account of the immense daily struggles faced by inmates passing through the New York City jail system. Their stories, failures, and all-too-rare successes put a human face on a population that has been largely ignored or demonized by politicians. It is an important book and a significant contribution to the literature on prisons and prisoners."—Michael Jacobson, former Commissioner, New York City Department of Correction

"Inside Rikers is an astonishing and gripping account of the prison life and beyond, one that you have never seen or heard before. Only someone of Jennifer Wynn's talent and compassion could get so many men hardened by the brutal prison experience to open up and spill their guts about the underbelly of American life. The portraits that emerge enrage, sicken, inspire, and ultimately uplift. They are life's lessons, and they are not to be missed."—Steven Donziger, editor, The Real War on Crime, and former director of the National Criminal Justice Commission

"A clearheaded, realistic examination of life inside a place about which most of us know next to nothing and probably would be hard-pressed even to imagine."—The Washington Post

"Jennifer Wynn, book-smart and street-smart, is a great guide to this island of exiles, located right under our noses and yet so invisible to most. She takes us inside Rikers and then out again, following the lives of officers and, her particular interest, prisoners. A valuable look at a place I've wondered about for years."—Ted Conover, author of Newjack: Guarding Sing Sing

"A complex, thoughtful analysis . . . Wynn's study is ultimately a call for much-needed prison reform, with emphasis on rehabilitation rather than mere incarceration, and she makes her case well."—Kristine Huntley, Booklist

"The book clearly shows that rather than infusing communities and prisons themselves with energy and, more importantly, funding to support potentially constructive and reformative resources, American society prefers a 'make disappear' approach to criminal behavior."—Suzanne W. Wood, Library Journal

1
WELCOME TO THE ROCK
The vilest deeds like poison weeds, Bloom well in prison air; It is only what is good in Man That wastes and withers there ... .
--Oscar Wilde, The Ballad of Reading Gaol

Jennifer Wynn is the director of the Prison Visiting Project at the Correctional Association of New York, the oldest criminal justice agency in New York City, and editor of the Rikers Review for the Osborne Association. She has visited over thirty state prisons and interviewed hundreds of prisoners—in solitary confinement, in prison yards, and in mess halls. She lives in Brooklyn Heights, New York, and is a doctoral candidate at John Jay College of Criminal Justice.