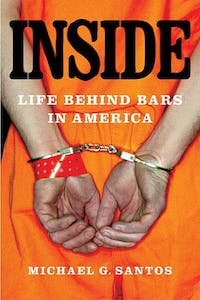 American jails and prisons confine nearly 13.5 million people each year, and it is estimated that 6 to 7 percent of the U.S. population will be confined in their lifetimes. Despite these disturbing numbers, little is known about life inside beyond the mythology of popular culture.

Michael G. Santos, a federal prisoner nearing the end of his second decade of continuous confinement, has dedicated the last eighteen years to shedding light on the lives of the men warehoused in the American prison system. Inside: Life Behind Bars in America, his first book for the general public, takes us behind those bars and into the chaos of the cellblock.

Capturing the voices of his fellow prisoners with perfect pitch, Santos makes the tragic—and at times inspiring—stories of men from the toughest gang leaders to the richest Wall Street criminals come alive. From drug schemes, murders for hire, and even a prostitution ring that trades on the flesh of female prison guards, this book contains the details of prison life that illuminate the varied ways in which men experience life behind bars in America.

"Inside is actually two books. The red meat of the book is a collection of more than 100 prisoners' accounts, including every gruesome detail . . . But between shocking tales of inmate misbehavior are Santos' convincing theories about what it all means."—Sean Bosker, New York Post

"[A] revealing, compelling book . . . At the heart of Santos's frequently harrowing book is a simple argument: Prisons have become places where crime does pay."—Edward Humes, Los Angeles Times Book Review

"What does it mean to be behind bars? What does it feel like? How does it affect people? How do prisoners cope? These are crucial questions for a society that uses prison so readily. Michael Santos has written a book of rare quality and pressing importance. It is at once easy to read, because it is so well written; but also hard to read, because the story it tells is so troubling. To read this book is to change the way you think about imprisonment."—Todd R. Clear, Distinguished Professor and Executive Officer, Program of Doctoral Studies in Criminal Justice, John Jay College, The City University of New York

"Michael Santos . . . strives to bring the reader 'inside' the different security levels of institutions within the . . . Federal Bureau of Prisons (BOP). From the violent and dangerous maximum security prisons of the U.S. Penitentiaries, to the gladiator schools of the medium security Federal Correctional Institutions, and ultimately to the minimum security Federal Prison Camps, Santos eloquently and engagingly captures the subculture of the prisoner . . . he draws on his many years of imprisonment to describe the destructive nature of the prison environment both for those imprisoned and for those that work in this environment . . . This book is not recommended for the faint at heart, as Santos describes in vivid and graphic detail violent assaults, sexual activity, and coarse language that is the daily life of prisoners . . . the Correctional System, according to Santos does not correct . . . it is the author himself that serves as the classic example of a system run amok in its fervor for harsher . . . punishments. Inside will also serve as an excellent supplemental text for courses in corrections, penology, criminology, sociology, and psychology."—Sam Torres, Ph.D., Professor of Criminal Justice, California State University, Long Beach, and Senior U.S. Probation Officer (Ret.)

"Michael Santos, a federal prisoner . . . has made an outstanding contribution to our understanding of life inside America's prisons. Based on interviews with his fellow inmates and his own experiences in six prisons, Santos describes the overcrowding, gang violence, and administrative bungling that characterizes many prisons. He argues that the correctional system does not provide opportunities for inmates to 'earn' their way to freedom, nor are efforts made to prepare them for their eventual release. This book is unique in that it is written by a prisoner about prison society."—George F. Cole, Professor Emeritus, University of Connecticut

"Michael Santos has done two remarkable things in this engaging portrait of life on the 'inside.' First, he has provided to the general reading public the perspective and experience of a wide range of his fellow inmates, who rarely if ever have a public voice. The language is . . . hostile; but so is the culture of which it speaks. Second, he has demonstrated in his own perspective the triumph of the human spirit that refuses to let past mistakes or present circumstances have the final say in defining who he is. We can hope that this overture . . . will prompt a new level of conversation about how we deal with our own and others' mistakes and bad decisions in ways that can build a better future."—J. Colin Harris, Professor of Religious Studies, Mercer University

"Disturbing as well as uplifting, Inside sheds light on the darkest corners of the U.S. society. It should be read by all those interested in justice, punishment and forgiveness."—Mary Bosworth, Ph.D., Centre for Criminology, University of Oxford

"Incarcerated for drug-trafficking since 1987, Santos documents the tedium and brutality of prison life. The author's first book weaves memoir and first-hand reporting together to paint a muckraking portrait of American jails. His constant refrain is that the current penal system perpetuates failure-prisons 'create resentment . . . degrade each individual's sense of self, and separate offenders in every way from society'—and since prisoners aren't taught to expect that they can be anything other than jailbirds, a feeling of hopelessness sets in. Santos's stories about ruthless and corrupt prison officials are especially shocking. One guard, for instance, pimps out his wife, who also works in the prison, to an inmate; for one five-minute tryst, the couple collects $1,000, which the prisoner easily procures from friends on the outside. The dehumanizing penal culture guarantees recidivism, the author argues. He envisions prisons in which convicts are encouraged and prepared to lead constructive, law-abiding lives in the outside world, and he urges taxpayers to demand reform. Santos presents himself as an example of what is possible. He took college classes, earning a B.A. and a master's degree, and was on track to get a doctorate from the University of Connecticut when the relatively progressive prison warden retired. The warden's successor decided that graduate education would make prisoners hard to control, and so he shut down the program. The insights offered here are valuable . . . [and] eye-opening. "—Kirkus Reviews

"[Santos] uses his insider perspective to provide a blunt, often disturbing look at America's prison system. More anecdotal than personal or analytical, his account illustrates the presence of gangs, drugs, prostitution and rape in prison through a series of dramatized stories. Although the dialogue is at times overwrought, the stories themselves are shocking and illuminating. Together they paint a picture of prison culture and its dehumanizing effects on the people who live within it. The book also functions beyond its role as an exposé, effectively questioning the efficacy of modern prisons. Santos rejects the idea that the 'correctional system' does much correcting, and provides repeated examples of the sense of hopelessness inmates suffer during their sentences."—Publishers Weekly

Michael G. Santos was convicted in 1987, at the age of twenty-three, of crimes relating to his participation in a drug-trafficking scheme and sentenced to forty-five years in prison. He has earned a bachelor of arts and a master of arts. He contributes to an extensive website as a resource for those who seek to understand the prison system and the people it holds. He is currently designated to the Federal Prison Camp in Lompoc, California, and based on his impeccable disciplinary record, looks forward to his release in 2013.