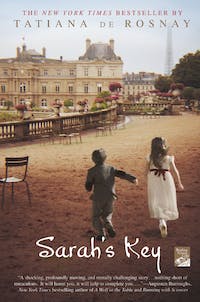 Sign up now
Paris, July 1942: Sarah, a ten year-old girl, is brutally arrested with her family by the French police in the Vel' d'Hiv' roundup, but not before she locks her younger brother in a cupboard in the family's apartment, thinking that she will be back within a few hours.

Paris, May 2002: On Vel' d'Hiv's 60th anniversary, journalist Julia Jarmond is asked to write an article about this black day in France's past. Through her contemporary investigation, she stumbles onto a trail of long-hidden family secrets that connect her to Sarah. Julia finds herself compelled to retrace the girl's ordeal, from that terrible term in the Vel' d'Hiv', to the camps, and beyond. As she probes into Sarah's past, she begins to question her own place in France, and to reevaluate her marriage and her life.

Tatiana de Rosnay offers a brilliantly subtle, compelling portrait of France under occupation and reveals the taboos and silence that surround the painful episode in that country's history.
“This is the shocking, profoundly moving and morally challenging story . . . It will haunt you, it will help to complete you . . . nothing short of miraculous.”—Augusten Burroughs

“A powerful novel . . . Tatiana de Rosnay has captured the insane world of the Holocaust and the efforts of the few good people who stood up against it in this work of fiction more effectively than has been done in many scholarly studies. It is a book that makes us sensitive to how much evil occurred and also to how much willingness to do good also existed in that world.”—Rabbi Jack Riemer, South Florida Jewish Journal

“Just when you thought you might have read about every horror of the Holocaust, a book will come along and shine a fierce light upon yet another haunting wrong. Sarah's Key is such a novel. In remarkably unsparing, unsentimental prose . . . through a lens so personal and intimate, it will make you cry—and remember.”—Jenna Blum, author of Those Who Save Us

“A remarkable novel written with eloquence and empathy.”—Paula Fox, author of Borrowed Finery

"A story of hearts broken, first by the past, then by family secrets, and the truth that begins to repair the pieces. A beautiful novel."—Linda Francis Lee, bestselling author of The Ex-Debutante

“Sarah's Key unlocks the star crossed, heart thumping story of an American journalist in Paris and the 60-year-old secret that could destroy her marriage. This book will stay on your mind long after it's back on the shelf.”—Risa Miller, author of Welcome to Heavenly Heights

“This is a remarkable historical novel . . . it's a book that impresses itself upon one's heart and soul forever.”—Naomi Ragen, author of The Saturday Wife

“Masterly and compelling, it is not something that readers will quickly forget. Highly recommended.”—Library Journal (starred review)

"De Rosnay's U.S. debut fictionalizes the 1942 Paris roundups and deportations, in which thousands of Jewish families were arrested, held at the Vélodrome d'Hiver outside the city, then transported to Auschwitz. Forty-five-year-old Julia Jarmond, American by birth, moved to Paris when she was 20 and is married to the arrogant, unfaithful Bertrand Tézac, with whom she has an 11-year-old daughter. Julia writes for an American magazine and her editor assigns her to cover the 60th anniversary of the Vél' d'Hiv' roundups. Julia soon learns that the apartment she and Bertrand plan to move into was acquired by Bertrand's family when its Jewish occupants were dispossessed and deported 60 years before. She resolves to find out what happened to the former occupants: Wladyslaw and Rywka Starzynski, parents of 10-year-old Sarah and four-year-old Michel. The more Julia discovers—especially about Sarah, the only member of the Starzynski family to survive—the more she uncovers about Bertrand's family, about France and, finally, herself. Already translated into 15 languages, the novel is De Rosnay's 10th (but her first written in English, her first language). It beautifully conveys Julia's conflicting loyalties, and makes Sarah's trials so riveting, her innocence so absorbing, that the book is hard to put down."—Publishers Weekly (starred review)

The girl was the first to hear the loud pounding on the door. Her room was closest to the entrance of the apartment. At first, dazed with sleep, she thought it was her father, coming...

The beloved bestselling novel that has touched millions — Soon to be a major motion picture.

TATIANA DE ROSNAY is the author of more than ten novels, including the New York Times bestselling novel Sarah’s Key, an international sensation with over 9 million copies sold in forty-two countries worldwide that has now been made into a major film. Tatiana lives with her husband and two children in Paris.