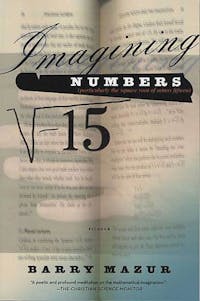 Imagining Numbers (particularly the square root of minus fifteen) is Barry Mazur's invitation to those who delight in the imaginative work of poetry—and who may or may not have a background in math—to leap into the world of imaginary numbers. Such numbers are strange and fascinating mathematical entities, as this accessible book shows, ideas whose meanings have evolved in richly telling ways. (Indeed, imaginary numbers were sometimes called "impossible" when first recognized and brought into use in 16th-century Italy; it took over 200 years for mathematicians to become thoroughly comfortable using them.)

Discussing the function of the imagination, as well as that of imagery, in both poetry and mathematics, Mazur reviews the ideas and writings of some of history's key mathematical explorers, such as Rafael Bombelli, an engineer who composed his great treatise L'Algebra while engaged in the project of draining Tuscany's Chiana swamp. In an entertaining work of explanation and exposition, of theory and play, Mazur encourages us to grasp the initial bafflement of such Renaissance thinkers—the how and why of their confusion—while also encouraging us to think more creatively about math in all its guises. Finally, this unique book shows us, step by step, how to begin imagining such uncanny numbers ourselves.

"A stimulating and challenging journey."—Scientific American

"Anyone who uses complex numbers daily [will herein] find a new appreciation of [one's] craft, a great collection of historical references to peruse, and perhaps a new appreciation for [one's] colleagues in the English and History departments . . . [Mazur] gets the math right, totally right . . . He brings an urgency to the message that mathematics is one of the most compelling stories in history . . . It is important because it teaches us that we all should have such grace."—Gwyneth G. H. Coogan, Mathematical Reviews

"A poetic and profound meditation on the mathematical imagination . . . Mazur explores the history of imaginary numbers [and] evocatively recreates the bewilderment of the Renaissance scholars who first grappled with this idea . . . Through the lens of their imagination, he leads the reader to a deeper comprehension of the realm of numbers."—Frederick Pratter, The Christian Science Monitor

"Through anecdotes, poetry, and philosophy, Mazur [makes] a delightful case for the pleasure of abstract thought."—New Scientist

"Marvelous . . . Enchantingly told . . . As one of America's leading mathematicians, Mazur reveals himself also as a delicate stylist who can not only evoke the history of algebra but also comment upon the common ground it shares with tulips in Arab cultural life."—Margaret Wertheim, Los Angeles Times

"Mazur is a mathematician with the soul of a poet. Here he uses poetry and aesthetics to illuminate the role of imagination in the discovery of far-reaching connections among algebra, geometry, and trigonometry . . . The technicalities will be old hat to anyone familiar with trigonometry and first-year college algebra, but the masterful step-by-suggestive-step presentation inviting the reader to make independent forward moves can give real pleasure to mathematicians as well as the rest of us."—T.C. Holyoke, Antioch Review

"A clear, accessible, beautifully written introduction not only to imaginary numbers, but to the role of imagination in mathematics."—George Lakoff, Professor of Linguistics, University of California, Berkeley

"A very compelling, though-provoking, and even dramatic description of what it means to think mathematically."—Joseph Dauben, Professor of History and History of Science, City University of New York

"This absorbing and in itself most imaginative book lies in the grand tradition of explanations of what mathematical imagination is—such as those of Hogben, Kasner and Newman, and Polya's How to Solve It. But it is unique in its understanding of and appeal to poetic thought and its analogues, and will appeal particularly to lovers of literature."—John Hollander, author of Rhyme's Reason

"Barry Mazur's Imagining Numbers is quite literally a charming book; it has brought even me, in a dazed state, to the brink of mathematical play."—Richard Wilbur, author of Mayflies: New Poems and Translations

"[A] quizzing, quizzical little book . . . as exciting, and almost as provocative, as anything in Phillip Pullman."—The Observer (London)

Barry Mazur does his mathematics at Harvard University and lives in Cambridge, Massachussetts, with the writer Grace Dane Mazur.