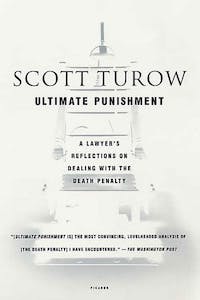 Scott Turow is known to millions as the author of peerless novels about the troubling regions of experience where law and reality intersect. And as a respected criminal lawyer, he has been involved with the death penalty for more than a decade, successfully representing two different men convicted in death penalty prosecutions. In this vivid account of how his views on the death penalty have evolved, Turow describes his own experiences with capital punishment, from his days as an impassioned young prosecutor to his recent service on the Illinois Commission that investigated the state's administration of the death penalty and influenced Governor George Ryan's unprecedented commutation of the sentences of 167 death row inmates on his last day in office.

Along the way, Turow provides a brief history of America's ambivalent relationship with the ultimate punishment; analyzes the potent reasons for and against it, including the role of the victims' survivors; and tells the powerful stories behind the statistics, as he moves from the governor's mansion to Illinois' Super-Max prison and the execution chamber. Ultimate Punishment is a gripping, clear-sighted, necessary examination of the principles, the personalities, and the politics of a fundamental dilemma of American democracy.

"In that rarest of achievements, a page-turner filled with genuine wisdom, Scott Turow takes us on a mesmerizing voyage through the land of murder, holding us spellbound as we arrive finally at the secret lying at the heart of every one of Turow's gripping novels, a secret whose revelation exposes what we truly seek from capital punishment—and why we will never find it there. Written with a fine lawyer's feel for fairness and with a superb novelist's gift for telling us truths beyond the power of law's logic to express, Ultimate Punishment is the ultimate statement about the death penalty: to read it is to understand why law alone cannot make us whole."—Laurence H. Tribe, Tyler Professor of Constitutional Law, Harvard Law School

"Turow does a fine job of condensing the tremendously complex workings of capital punishment in America . . . Just as I recommend this book to non-lawyers because it is a readable lesson on an important issue, I also recommend it to lawyers."—Elizabeth Kelly, Trial

"Turow's book flows well [and] is compact . . . But [it] covers the topic . . . Turow addresses both the leading pro and con death penalty arguments and handles them evenly . . . Thought-provoking, heart-wrenching, and deserving of a close read."—Leslie Doran, The Denver Post

"A thoughtful, reasoned discourse on an explosive topic . . . [A] fine new book . . . Turow is a sure-footed tour guide with a nuanced view of a complex subject. He does not so much attack the issue as reason it into submission . . . Turow's tone throughout is one of understatement and empathy, the perfect voice for an issue that demands cool-headed reason."—Kevin Canfield, The Atlanta-Journal Constitution

"A balanced, thoughtful presentation . . . Although Turow briefly reviews the complex legal landscape that controls death-penalty litigation, the book focuses most of its attention on the application of capital punishment in America today . . . One would be hard-pressed to find a more complete, reasoned, and fair analysis of the issue that accepts both sides of the debate as founded on real and very valid concerns."—Kevin J. Hamilton, The Seattle Times

"A concise analysis of the main issues involved in the capital punishment controversy . . . Chapter by chapter, Mr. Turow presents and analyses the arguments and sociological evidence related to the death penalty that he confronted in his evolution from death penalty skeptic to an individual who thought that the death penalty should not endure . . . Mr. Turow's brief examination of the capital punishment controversy makes for thought-provoking and engaging reading."—Theodore Pollack, The New York Law Journal

"Drawing upon his experience as a lawyer on both sides of death-penalty cases and the research he did as a member of the [Illinois] Commission, Turow invites readers along on his exploration of the question of whether the state ever is justified in taking a life . . . He lays out the arguments for and against the death penalty so persuasively that the reader veers from one side to the other along with him."—Tom Brazaitis, The Plain-Dealer (Cleveland)

"As one who has long wrestled with this issue, and who as an editorialist many years ago from time to time had to do that wrestling in public, I regard this as the most convincing, level-headed analysis of it I have encountered."—Jonathan Yardley, The Washington Post

"Ultimate Punishment is a genuine effort of personal clarification, understanding, and discovery. That is its strength: it is rarely that one reads a book of real inquiry on a subject about which most people feel passionately."—Anthony Daniels, The New Criterion

"[This book is] readable and engaging, and, more important, it speaks to an audience not always considered by death penalty opponents: people, like Turow himself, for whom capital punishment has a strong visceral appeal."—Sharon Dolovich, Los Angeles Times

"Reflective, written from the perspective of an insider . . . Deserves a huge audience . . . The insider experiences on which [Turow] bases his arguments irrefutable . . . [Ultimate Punishment] has the potential [to] make a documentable, permanent impact."—Steve Weinberg, San Francisco Chronicle

"Slim [and] reasoned . . . [The author's] sensitivity to the nuances of law and life is evident here as he recounts his experiences working on two death penalty appeals, his role on the [recent Illinois commission on the death penalty], and his survey of the principles, politics, and pros and cons underlying [today's] death penalty debate."—Greg Moran, The San Diego Union-Tribune

"Sober thoughts on capital punishment. Over his years as a prosecutor, bestselling novelist Turow evolved from holding Aquarian views on human nature to holding Hobbesian ones. Still, when it came to the death penalty, he says in this brief collection of ruminations, he knew the cautionary lessons and considered himself an agnostic on the issue. But in 2000, when the governor of Illinois appointed a commission, including Turow, to investigate the state's capital-justice system, it was a moment of truth: 'No more dodging my conscience, no more mouthing liberal pictics while secretly hoping some conservative showed up to talk hard-nose realities.' Turow now had to ask himself about the goals of such punishment, whether some individuals were perdurably evil and what kind of power the government should be allowed to wield. On a practical level, he found much wanting in the Illinois system: that confessions no longer had the weight they once did (especially when beaten out of suspects); that 'emotional momentum' to solve particularly repellent crimes can result in fastening onto the first suspect and chewing away long after the bone has gone cold; that the creeping influence of victims' rights obscured the character of the defendant and the crime involved; and that deterrence simply was not a compelling rationale. Philosophically, Turow hesitates over the question of moral proportions, the idea that the punishment of a crime be an unequivocal statement of moral order. As for Illinois, he found its capital-justice system sprawling and arbitrary, without logic as to the selections for execution, and lacking a guiding hand of reason. The commission's recommendations—specific ones, keeping the option of death to a minimum—were ignored by the get-tough political agenda of the new governor. Well presented . . . In a handful of sorry examples from Illinois, Turow's storytelling talents shine."—Kirkus Reviews

"Former federal prosecutor, death penalty appellate lawyer, and best-selling novelist Turow provides a thoughtful account of the evolution of his views on the death penalty . . . Turow does an excellent job of describing how he wrestled with the arguments for and against the death penalty. The hallmark of the book is Turow's visit to the Tamms Prison, Illinois's Super-Max facility, and serial murderer Henry Brisbon, 'Illinois' poster child for the death penalty.' By clearly and methodically sorting through the issues regarding the ultimate punishment, Turow has performed a public service. By turns shocking and engrossing, this book is highly recommended."—Library Journal

"Turow has some useful insights into this fiercely debated subject, based on his experiences as a prosecutor and, in his postprosecutorial years, working on behalf of death-row inmates, and his two years on Illinois's Commission on Capital Punishment, charged by the former Gov. George Ryan with examining how the death penalty might be more fairly administered. This is a sober and elegantly concise examination of a complex, fraught topic by an admitted 'agnostic.' His views veering one way and then the other, Turow shares his back-and-forth reasoning as he carefully discusses each issue, from the possible execution of an innocent person (a serious danger) to whether execution is a deterrent (it's not). Perhaps most illuminating are Turow's thoughts on victims' rights (which he says must be weighed against the needs of the community); on what to do with 'the worst of the worst' (he visits a maximum security prison to meet multiple-murderer Henry Brison, who, Turow says, 'most closely resembles . . . Hannibal Lecter'); and the question of what he calls 'moral proportion,' the notion that execution is meant to restore moral balance, which, he says, requires an 'unfailingly accurate' system of justice. This measured weighing of the facts will be most valuable to those who, like Turow, are on the fence—they will find an invaluable, objective look at both sides of this critical but highly charged debate."—Publishers Weekly

Scott Turow is the author of worldwide bestselling novels including Presumed Innocent, Ordinary Heroes, The Burden of Proof, Reversible Errors and Limitations. His works of nonfiction include One L, his journal from his first year at law school, and Ultimate Punishment, which he wrote after serving on the Illinois commission that investigated the administration of the death penalty and influenced Governor George Ryan’s unprecedented commutation of the sentences of 164 death row inmates on his last day in office. Ultimate Punishment won the Robert F. Kennedy Book Award. He lives outside Chicago, where he is partner in the firm of SNR Denton (formerly Sonnenschein, Nath & Rosenthal).