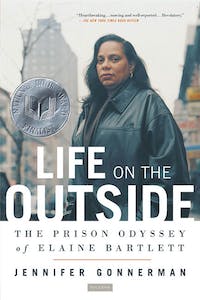 Life on the Outside is a riveting account of one woman's struggle to win her freedom and change her life; it is also an extraordinary feat of reporting, one that makes vivid the real-life effects of the rough justice meted out to the poorest of the poor.

This book tells the story of Elaine Bartlett, who spent sixteen years in prison for a single sale of cocaine—a consequence of New York State's controversially harsh Rockefeller drug laws. It opens on the morning Elaine is set free from the woman's prison in Bedford Hills, New York, after winning clemency from the governor. At age forty-two, having spent most of her adult life behind bars, she has no money, no job, and no real home. What she does have is a large and troubled family, including her four children, who live in a decrepit housing project on the Lower East Side of Manhattan. "I left one prison to come home to another," Elaine says. In the months following her release, she strives to adjust to "life on the outside": conforming to parole's rules, hunting for a job and a new apartment, and reclaiming her role as head of the household, all while campaigning for the repeal of the merciless sentencing laws that led to her long prison term.

In recent years, the United States has imprisoned more than two million people—many for nonviolent crimes—while making few preparations for their eventual release. Now those people are returning to our communities in record numbers, coming home as unprepared for life on the outside as society is for them. With this important book, Gonnerman at once calls attention to a mounting national crisis and claims her place alongside the masters of narrative nonfiction writing—all by telling one woman's story, a saga of struggle and survival, guilt and forgiveness, loneliness and enduring love.

"The United States is transforming itself into a nation of ex-convicts. This country imprisons people at 14 times the rate of Japan, eight times the rate of France, and six times the rate of Canada. The American prison system disgorges 600,000 angry, unskilled people each year—more than the populations of Boston, Milwaukee, or Washington. 'Thirteen million people have been convicted of a felony and spent some time locked up,' Jennifer Gonnerman writes in Life on the Outside. 'That's almost 7 percent of U.S. adult residents. If all of these people were placed on an island together, that island would have a population larger than many countries, including Sweden, Bolivia, Senegal, Greece, or Somalia' . . . Most of this moving and well-reported book deals with Elaine's struggle to create a life for herself outside the prison walls—by finding a job, a place to live, and by reconnecting with her thoroughly damaged family. This ground is familiar, but revelatory too, as when Elaine realizes that she has exchanged the prison behind bars for the prison that awaits ex-offenders who try to make it in the real world."—Brent Staples, The New York Times Book Review

"Gonnerman paints the fragility of Bartlett's [life] convincingly . . . Life on the Outside wisely relies on unadorned prose and a careful sense of structure and pace . . . Somber and stately."—Samuel G. Freedman, Chicago Tribune

"Powerful . . . Offers an unvarnished glimpse into the life of a former prisoner."—Bookpage

"Enlightening . . . [A] stirring and ultimately heartbreaking book on what it means to leave prison . . . A remarkably balanced triumph of immersion journalism . . . Gonnerman makes [Elaine] Bartlett a compelling protagonist but not a perfect heroine. In an easy style that's free of tendentious bluster, she paints Bartlett's ample flaws, from her temper to her occasional delusions of grandeur to her often bafflingly knuckle-headed judgment. She also manages to weave a critical history of our 30-year national war on drugs and its many side-effects into the book without breaking the narrative."—Michael Schaffer, The Washington Post Book World

"A riveting tale of how America's prison-dustrial-complex sets up people of color, churns them through the system, and spits them lifelessly back on the streets."—High Times

"Compelling . . . [It's] challenging to attempt to examine a major social issue through the narrow focus of one person's encounter with it—as not a few better-known writers than Gonnerman have found to their dismay. Gonnerman has successfully met the challenge with a sympathetic heart for Bartlett and an unblinking eye for social injustice."—Michael Kenney, The Boston Globe

"Every once in a while you read something in which the characters are so vivid you find yourself thinking about them even when you're not immersed in the text. Life on the Outside is such a book . . . [This book] asks provocative questions about our country's lock-'em-up ethos . . . In 2002, the U.S. jail and prison population topped two million. Life on the Outside gives lawmakers and civilians a clear-eyed view of what this means in human terms and begs society to assess the tough-on-crime approach that the Rockefeller drug laws exemplify. In so doing, it urges us to act humanely, and reconsider the ways we treat those we call criminals . . . [This] is advocacy journalism in the powerful tradition of Michael Harrington, Jacob Riis, and Margaret Sanger."—Eleanor J. Bader, New York Law Journal

"Gonnerman gets it right. With sharp reporting, she captures the merciless grind of one woman attempting to reintegrate into society after serving a draconian drug sentence. [This] book should take its place among such classics of urban sociology as W. E. B. Du Bois' The Philadelphia Negro, Fox Butterfield's All God's Children, and Carol Stack's All Our Kin."—Debra J. Dickerson, Mother Jones

"Life on the Outside is a powerful indictment of mandatory minimums, but the book isn't just about the way New York locks people up. It's also about what happens to the people who are left behind when somebody gets incarcerated, and what happens to prisoners once they get home. A book-length examination of this subject was long overdue . . . Gonnerman's compelling and moving account is a call to arms for further reform. At the same time, however, by virtue of the thoroughness and honesty of Gonnerman's reporting, Life on the Outside also points up the limitations of the criminal justice reform movement. Elaine's story offers a rare and valuable glimpse of daily life in the inner city, and it's a sobering vision. Nelson Rockefeller did not create the cycle of poverty and desperation into which three generations of the Bartlett family—along with 600,000 other souls living in public housing in New York City—are mired. Likewise, if the drug war ended tomorrow, the prospects for Elaine and her children would not dramatically improve. But that is not what we are meant to take away from this book. We are meant to understand that mass incarceration that incredibly ambitious enterprise at which this country has excelled far beyond any other is not part of the solution. By that measure, Life on the Outside is a masterpiece."—Nate Blakeslee, The Texas Observer

"Life on the Outside is an unbelievably insightful and readable book. It illuminates the huge issues of incarceration, reentry, poverty, and crime through one woman's personal experience. I will definitely adopt it for my corrections courses."—Joan Petersilia, Professor of Criminology, University of California, Irvine

"Through the remarkable Elaine Bartlett, Jennifer Gonnerman deftly maps out the middle passage of what is perhaps the most pernicious social injustice of our time. She charts a seemingly impenetrable intersection of problems, fact by brutal fact. Only writing and reporting of this caliber could track the intricate ways in which our nation's prison industry is also family business, and show how harsh sentences don't end on the outside."—Adrian Nicole LeBlanc, author of Random Family

"Gonnerman's Life on the Outside is that rarest of books. It informs both the heart and the mind. Honest and stirring, Life on the Outside will keep you reading through the night. And it will leave you shaking your head at our nation's thirst for rigid and unforgiving sentencing laws. This book is a triumph of storytelling."—Alex Kotlowitz, author of There Are No Children Here

"Bartlett is a real person for whom conservative and liberal nostrums are unreal. Jennifer Gonnerman's searing book will drag you into a world where an ex-con like Bartlett, a mother of four, serves a ridiculous sentence for a first drug offense, then with no confidence, no job, and few skills leaves prison and struggles to survive. Gonnerman crafts a first-rate story with universal meaning from the particulars of Bartlett's life. This luminous book gets inside your brain and doesn't escape."—Ken Auletta, Media correspondent for The New Yorker and author of Backstory: Inside the Business of News

"The Rockefeller Drug Laws were put into effect to show that New York State was tough on crime, but when you look at the case of Elaine Bartlett, you don't think 'tough on crime' but 'human rights violation', 'cruel and unusual punishment', or just plain 'immoral'."—Charles Grodin

"Life on the Outside is required reading. At a time when the prison-industrial complex is destroying African-American families and neighborhoods, Elaine Bartlett is more than a survivor: she is a heroine. The future of our communities depends on women like her."—Russell Simmons, founder of Def Jam Records and Chairman of The Hip-Hop Action Network

"For two and a half years, journalist Gonnerman shadowed recently released prisoner Elaine Bartlett, providing an intimate glimpse into the multiple difficulties associated with attempting to reassimilate into a society that is ill-prepared and often unwilling to assist ex-convicts . . . Guaranteed to raise both eyebrows and awareness, this powerful testament to tenacity raises important questions about this nation's inadequately funded and poorly designed reentry system for paroled inmates."—Booklist

"[A] compulsively readable account of a life wasted by the war against drugs but later reclaimed . . . Village Voice staff writer Gonnerman constructs a propulsive, cleanly written narrative that considers Bartlett's plight in the larger context of how America's obsession with drug crime has blighted the prospects of multiple generations in the inner city . . . Gonnerman captures this angry urban milieu in clear-eyed, non-melodramatic terms. Elaine's story forces the reader to consider the toll exacted by myopic and effectively racist public policies that purport to address the social conundrum of illicit drugs in a market economy. Powerful stuff, grievously well rendered: Bartlett seems to be a remarkable survivor."—Kirkus Reviews

"Gonnerman makes an excellent argument for the ways in which the New York criminal justice system, particularly the 'tough on crime' measures imposed in the last three decades, fails poor and less educated people. She skillfully uses Bartlett, a tough, assertive woman who struggles to hold a job and keep her family together after their years of enforced separation, as an exemplar of the wide-ranging impact of incarceration on both ex-cons and the communities they leave behind, a social problem just beginning to be studied."—Publishers Weekly

Life on the Outside

Elaine Bartlett strutted the last few yards to the prison's front door and stepped out into the brisk winter air. This...

Jennifer Gonnerman is a prizewinning staff writer for The Village Voice. She has also written for The New York Times Magazine and many other publications. Her article on which Life on the Outside is based won the Livingston Award for Young Journalists in 2001.