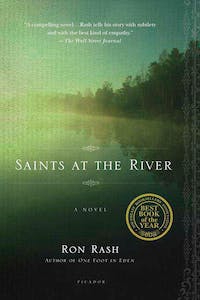 A Southeast Booksellers Association Best Book of the Year

When a twelve-year-old girl drowns in the Tamassee River and her body is trapped in a deep eddy, the small South Carolina town that bears the river's name becomes the center of a far-reaching controversy. Anxious to recover the body and give their daughter a proper burial, the girl's parents want to send divers down into the rain-swollen currents. But a contingent of environmentalists is opposed to the rescue, convinced that it will damage the riverbed, violate conservation laws, and set a dangerous precedent.

Maggie Glenn, a twenty-eight-year-old newspaper photographer born in Tamassee but long since moved away, is assigned to cover the story. Back in her hometown, she's forced to confront not only her ailing and embittered father, but the friends and relatives who have taken sides against one another. Complicating matters further are an old boyfriend—now the charismatic leader of the group protesting the rescue—and the reporter sent to cover the story alongside her, a man with painful associations of his own that may threaten the relationship they've recently begun. And as the family history she's so successfully repressed threatens to surface, Maggie finds that she herself is vulnerable to the painful implications of the conflict—questions of integrity, loyalty to home and family, and to the past.

Distinguished by the same lyrical prose and strong sense of place that marked Rash's award-winning first novel, One Foot in Eden, Saints at the River is a trenchant portrayal of universal human themes: the love of the land, the hold of the dead on the living, the blood ties of family, and the moral obligations of a community. With this book, Rash emerges as one of today's most gifted storytellers.

"Rash's clean prose and love for the land easily carry this book to its conclusion, providing readers with a powerful ending that is both surprising and well earned."—The Charlotte Observer

"Maggie is an ideal observer from the center for things. Her knowing voice carries us through this sad, complex, and beautiful story."—Time Out (New York)

"If traditional, straightforward storytelling with fleshy characters and detail is your thing, allow Ron Rash to sweep you deep into the South Carolina wild."—News & Record (Greensboro)

"Rash beautifully captures the resulting emotions, which surge as powerfully as the river wrought them."—Southern Living

"[Saints at the River is a] compelling ride [with] a deftly realized common setting."—Michael Bishop, The Atlanta Journal-Constitution

"On the heels of the success of One Foot in Eden, Rash delivers his sophomore effort Saints at the River. And deliver he does . . . Rash's lyricism about the river and trees and mountains resonates within scenes . . . As a stylist, Rash never falters, offering rich metaphors that quietly bring the nuances of Tamassee and the river to life . . . In terms of the somewhat simple style and its admirably plot-driven nature, comparable to the likes of Robert Morgan, Lee Smith, and Sue Monk Kidd, Rash's prose distinguishes itself in this novel, heralding the difficult but successful crossover from poet to novelist. But the real joy in reading Saints at the River comes not just from the joy of reading memorable writing and a darn good story, but also the anticipatory excitement of what will come next."—Sean A. Scapellato, The Post & Courier (Charleston, South Carolina)

"Saints at the River addresses a common problem encountered by a country with a diminishing wilderness, but it is tragedy with a human face that turns the tide, making legal decisions all the more difficult: protect the land as dictated by law or make exemptions for deserving humans who are suffering. The Tamassee River is protected by environmental law as a Wild and Scenic River in South Carolina, one of the few pristine waterways kept out of the reach of developers, but it is a long, bitter struggle by the residents to achieve such protective status for the river . . . This simple story constructs an ever-more common issue, the protection and conservancy of natural assets and all that entails. Clearly, when a sentimental twist is added, it is natural for the public to demand exception to the law to alleviate the suffering of victims. Often such exceptions precipitate the destruction of the protected region. Rash outlines the controversy with an unbiased eye in thoughtful prose, giving equal weight to both sides, illustrating the psychological nuances that color such decisions. But the river moves on inexorably, carrying its dead forever in its watery embrace, nature's voice often overridden by the cacophony of human need."—Luan Gaines, Southern Literary Review

"Like Rash's debut, One Foot in Eden, his second novel takes place in the Appalachian backwoods. A Minnesotan girl vacationing in South Carolina with her parents accidentally drowns in the Tamassee River, and her parents want to recover her body, which is trapped in an underwater gorge. This sparks a confrontation between environmentalists, who are strongly opposed to a rescue mission that would spoil the natural surroundings, and the family, which lobbies for public support through the media. Against this backdrop, former Tamassee resident Maggie Glenn, a staff photographer for a state newspaper, is sent to cover the story with high-profile reporter Allen Hemphill, who lost his daughter and wife in an automobile accident. The two become romantically involved, and when a town resident drowns during the rescue mission, Maggie must face up to feelings about past events that have cut her off from others—namely, her father, who, like Maggie herself, 'carries what he feels for people deep inside.' From the first page to the last, the author's down-to-earth characters and rich descriptions of the backwoods carry readers through this emotionally charged story. Recommended for all collections."—Library Journal

"Rash pens his novel in clear, unadorned prose appropriate to its ripped-from-the-headlines premise . . . A professor of Appalachian Studies at Western Carolina University and author of a previous Southern novel, One Foot in Eden, Rash clearly knows the people and places he writes about, and that authenticity pays off in a conclusion that packs an unexpected and powerful punch."—Publishers Weekly

"A gripping environmental drama [that] pits the rescue of a drowned child against the integrity of a river. Narrator Maggie Glenn works for a newspaper in Columbia, South Carolina. The 28-year-old photographer was born and raised in Tamassee, in the mountains to the west, and she's assigned, along with star reporter Allen Hemphill, to cover a big story in her hometown. Three weeks earlier, 12-year-old Ruth Kowalsky had been sucked into a whirlpool in the Tamassee River; county divers have failed to dislodge her body from the rock where it lies trapped. Ruth's father Herb, a powerful banker from Minnesota, wants to make the divers' job easier by erecting a portable dam to divert the water flow. One problem: Erection means drilling holes into the bedrock, and federal law protects the river from any violation of its natural state. Storywriter and second-novelist Rash sets up a finely balanced confrontation between Luke Miller, fearless and incorruptible champion of the river (though no saint), and Ruth's grieving parents, who want to give her a proper burial. Uncomfortably in the middle is the district ranger. Back in Tamassee, Maggie has more on her mind than her job. She has been estranged from her father ever since her brother Ben and she were badly burned in a childhood accident for which the old man was responsible. Now he's dying of cancer. Can Maggie make peace with him, as her more forgiving brother did years ago? On the job, she s26takes a haunting photograph of the despondent Herb Kowalsky. Along with Hemphill's reporting, it helps tip the balance in favor of the temporary dam. Luke, her ex-lover and mentor, is furious, and Maggie herself, secretly on his side, regrets taking it. But the suspense isn't over. The river is rising. Will the dam hold long enough for the divers to retrieve the girl? [A] spare, resonant, unputdownable [novel]."—Kirkus Reviews