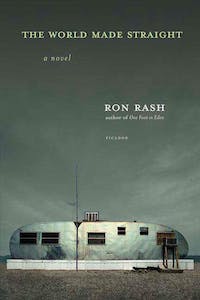 Winner of the Sir Walter Raleigh Award for Fiction

Travis Shelton is seventeen the summer he wanders onto a neighbor's property in the woods, discovers a crop of marijuana large enough to make him some serious money, and steps into the jaws of a bear trap. After hours of passing in and out of consciousness, Travis is discovered by Carlton Toomey, the wise and vicious farmer who set the trap to protect his plants, and Travis's confrontation with the subtle evils within his rural world has begun.

Before long, Travis has moved out of his parents' home to live with Leonard Shuler, a one-time schoolteacher who lost his job and custody of his daughter years ago, when he was framed by a vindictive student. Now Leonard lives with his dogs and his sometime girlfriend in a run-down trailer outside town, deals a few drugs, and studies journals from the Civil War. Travis becomes his student, of sorts, and the fate of these two outsiders becomes increasingly entwined as the community's terrible past and corrupt present bear down on each of them from every direction, leading to a violent reckoning—not only with Carlton, but with the legacy of the Civil War massacre that, even after a century, continues to divide an Appalachian community.

"An intellectually satisfying work of suspense . . . The World Made Straight reminds us of the sort of compelling literature a brave artist can fashion from the shards of experience. It is less the literature of post-apocalyptic landscape than it is one in which life, searching for reconciliation, continuously recapitulates the apocalypse in ways both social and personal."—Tim Rutten, Los Angeles Times

"Rash paints the beauty of the mountains vividly . . . [but he] does not shy from coloring in the meanness and the harsh side of the beauty as well. [He] creates a forceful reality, and his skill and style establish him as a powerful writer. He ties shadowy past and harsh present with a vine as strong and pervasive as kudzu."—Anne Moise, The Post and Courier


"His third novel . . . establishes Rash as a major writer. It further demonstrates his ability to tell a contemporary Appalachian story that is strongly rooted in that region's heart-rending past . . . Rash is a supreme master at revealing character through dialogue, with showing rather than telling. Without calling a person evil and mean or wise and kind, Rash can render on the page nuances of speech and tone that let us know without doubt exactly what a person is like . . . His knowledge of his own Appalachian past, which extends back into the mid-1700s, with his keen observation of people in Oconee County, S.C., where he lives, and Cullowhee, N.C., where he teaches, enable him to craft fiction that is at once uplifting, harrowing and unforgettable."—Donald Harington, The News & Observer

"The World Made Straight really is engrossing—indeed, the last devastating fifty-odd pages are almost too compelling. You want to look away, but you can't, and as a consequence you have to watch while some bad men get what was coming to them, and a flawed, likable man gets what you hoped he might avoid. It's a satisfyingly complicated story about second chances and history and education and the relationships between parents and their children; it's violent, real, very well written, and it moves like a train. . . . [Rash] manages to convince you right from the first page that his characters and his story are going to matter to you, even if you live in North London, rather than on a tobacco farm in North Carolina; it's an enviable skill, and it's demonstrated here so confidently, and with such a lack of show, that you almost forget Rash has it until it's too late, and your own sense of well-being is bound up in the fate of the characters."—Nick Hornby, The Believer

"[Rash's] novels are complex and compelling, told in graceful, conscientious prose, and The World Made Straight is his finest yet. Here, he deftly braids past and present to place, his own literary place."—Ashley Warlick, Charlotte Observer

"Ron Rash writes some of the most memorable novels of this young century . . . The World Made Straight establishes him as one of the major writers of our time."—The Atlanta Journal-Constitution

"This is the third novel by Ron Rash that has brought my life to a grinding halt—but to praise Rash simply as a powerful storyteller would be to overlook his gifts as a profoundly ethical writer and, at the same time, a poet with a fine and tender eye for the beauty of nature. What I love and admire most of all about this book, however, is its fierce confrontation of a human dilemma that has sparked too many of the world's most violent tragedies: the burning question of just how much allegiance we owe family and community, including the ghosts from our past."—Julia Glass, author of Three Junes

"The World Made Straight is a wonderful, heartbreaking, heart-healing kind of work, a work of genius—genius and insight and poetry and the kind of language that whispers to me like music coming back off dense wet hills and upturned faces."—Dorothy Allison, author of Bastard Out of Carolina

"Rash writes with beauty and simplicity, understanding his characters with a poet's eye and heart and telling their tale with a poet's tongue."—William Gay, author of Provinces of Night

"Ron Rash writes so well about real people, people one paycheck short of extinction, that you care what happens to his characters in every clause. In A World Made Straight, he shows how much trouble a poor ol' boy can get in, just trying to catch a fish or two. Even in this novel, his words sound like poetry."—Rick Bragg, author of All Over but the Shoutin' and Ava's Man


"Deft, intelligent, crisp, sensual and lyrical, The World Made Straight is the best work yet by a wonderful writer. This is why we read books: to encounter a great story told well."—Rick Bass

"High-schooler Travis Sheldon steals one too many marijuana plants from vicious tobacco-famer-turned-drug-dealer Carlton Toomey and ends up caught in a bear trap, his foot so mangled he needs surgery. Travis' stern father kicks him out, and he ends up bunking at the rundown trailer of bookish Leonard Shuler, a low-level drug dealer and former schoolteacher who lost his job and his family because of false charges. Leonard sees in Travis something of himself in his youth, when he used his intelligence to outrun the fate that lies in store for so many of the region's poverty-stricken residents. He bonds with the boy over their shared fascination with a local Civil War incident, a massacre that divided the town. Just as Leonard starts to get his own life in order and talks Travis into making plans for college, he becomes enmeshed in a confrontation with Toomey. Part melancholy historical novel and part high-voltage thriller, this third novel from the talented Ron Rash will appeal to readers who like their suspense done with literary flair."—Joanne Wilkinson, Booklist

Travis came upon the marijuana plants while fishing Caney Creek. It was a Saturday, the first week of August, and after helping his father sucker tobacco all morning he'd had the rest of the day for himself. He'd changed into...

THE WORLD MADE STRAIGHT - Trailer from Millennium Ent on Vimeo.

THE WORLD MADE STRAIGHT - Trailer

Watch the trailer for the 2015 film The World Made Straight, based on the novel by Ron Rash.