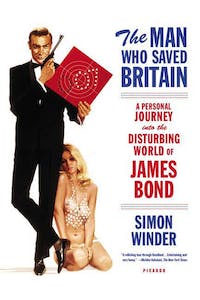 James Bond. The ultimate British hero—suave, stoic, gadget-driven—was, more than anything, the necessary invention of a traumatized country whose self-image as a great power had just been shattered by the Second World War. By inventing the parallel world of secret British greatness and glamor, Ian Fleming fabricated an icon that has endured long past its maker's death. In The Man Who Saved Britain, Simon Winder re-creates the nadirs of his own fandom while illuminating what Bond says about sex, the monarchy, food, class, attitudes toward America, and everything in between. It is an exploration of postwar Britain under the influence of the legendary Agent 007.

"Simon Winder gives us a rollicking tour through Bondland, [and] expertly captures the knowing blend of nostalgia, sophistication, and plain absurdity that made the Bond books (and later the movies) such a hit in the 1950s and '60s . . . Entertaining and very funny."—Michiko Kakutani, The New York Times

"Here at last is a book that not only takes Ian Fleming stories and the films they spawned seriously, but also places them in the context of British history. This is art (yes, art) criticism through the lens of geopolitics and national psychology. In short, 007 is receiving respectful treatment, and not a moment too soon. More of a meditation on England after World War II than an obsessive companion to all things Bond, Winder's study explains how Fleming's hero was a product of his time. Touching on various features of postwar malaise, from the lack of defining artistic achievement to economic stagnation, Winder paints a complex and nuanced picture of 1950s English life."—Isaac Chotiner, The New York Times

"[Winder] leavens his post-imperial outrage and postmodern guilt with a quirky sense of humor and takes us on a splendidly intolerant rampage through mid-20th-century Britain. He gives us a lefty's guide to London, from the statues that celebrate the slaughter on which the British Empire was built to the lackluster European street performers in contemporary Covent Garden."—Frances Stead Sellers, The Washington Post

"Completely captivating . . . Winder combines film criticism, history and cultural analysis with a sharp writing style that makes the book a breathless read for anyone interested in Bond or spy fiction or, indeed, the history of modern Britain . . . Brilliant and offbeat assessments."—Joe Meyers, Connecticut Post

"This brilliantly obsessive exegesis on the meaning and influence of the 007 character—part sociological study, part geek memoir—also has a sense of humor about its subject . . . Bond hasn't provided this much entertainment in decades."—Benjamin Svetkey, Entertainment Weekly

"Writing with wit and a sound knowledge of his subject matter, Winder traces the highs and lows of James Bond's career in print and on film and explores his symbolic and eclectic influence over time. He reveals how Bond, fresh from the pen of Ian Fleming, captured Britain's imagination and infused the self-image of a war-weary and weakened nation with fresh verve. Winder combines personal reminiscences of growing up in Britain during the Bond craze, biographical information on the colorful Ian Fleming and others, illustrative scenarios from the Bond adventures, and genial commentary on all of it . . . perceptive and entertaining."—Library Journal

"Winder combines cultural history, memoir and a terrifyingly formidable knowledge of James Bond plot lines to produce a hilarious and thoughtful narrative of the fall and rise of Britain from WWII to the present day. For a nation that had owned a quarter of the world but post-1945 was losing its possessions, Ian Fleming's masterful creation, 007, was its savior. Bond—quipping, killing and bedding all the way—put villainous foreigners and their sinister assortment of exotic henchmen back in their rightful place and ensured Britain would retain its top place in the world hierarchy. In reality, of course, the Americans and the Soviets gently ignored the sad little island and went about their Cold War business. But that did not matter, since 007 exemplified the potent fantasy of British superiority in all things. As for the best Bond movie and novel, Winder tilts toward 1963's From Russia with Love, where Fleming's writing reached its peak and director Terence Young coaxed terrific performances out of his actors. Fittingly for Winder, the film's theme is so dated it requires the most explanation for those who don't remember the Cold War."—Publishers Weekly

Simon Winder is the editor of several anthologies, including the highly praised Night Thoughts. He works in publishing and lives in London.