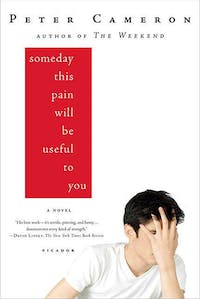 Someday This Pain Will Be Useful to You is the story of James Sveck, a sophisticated, vulnerable young man with a deep appreciation for the world and no idea how to live in it. James is eighteen, the child of divorced parents living in Manhattan. Articulate, sensitive, and cynical, he rejects all of the assumptions that govern the adult world around him—including the expectation that he will go to college in the fall. He would prefer to move to an old house in a small town somewhere in the Midwest. Someday This Pain Will Be Useful to You takes place over a few broiling days in the summer of 2003 as James confides in his sympathetic grandmother, stymies his canny therapist, deplores his pretentious sister, and devises a fake online identity in order to pursue his crush on a much older coworker. Nothing turns out how he'd expected.

"Possibly one of the all-time great New York books, not to mention an archly comic gem" (Peter Gadol, LA Weekly), Someday This Pain Will Be Useful to You is the insightful, powerfully moving story of a young man questioning his times, his family, his world, and himself.

"James Sveck is a brilliant wit of a character whose voice will echo long after his story ends."—Kristin Kloberdanz, Chicago Tribune

"Deliciously vital right from the start . . . a piece of vocal virtuosity and possibly Cameron's best book . . . It is a bravura performance, and Someday This Pain Will Be Useful to You is a stunning little book."—Lorrie Moore, The New York Review of Books

"Though he's been accepted by Brown University, 18-year-old James isn't sure he wants to go to college. What he really wants is to buy a nice house in a small town somewhere in the Midwest—Indiana, perhaps. In the meantime, however, he has a dull, make-work job at his thrice-married mother's Manhattan art gallery, where he finds himself attracted to her assistant, an older man named John. In a clumsy attempt to capture John's attention, James winds up accused of sexual harassment! A critically acclaimed author of adult fiction, Cameron makes a singularly auspicious entry into the world of YA with this beautifully conceived and written coming-of-age novel that is, at turns, funny, sad, tender, and sophisticated. James makes a memorable protagonist, touching in his inability to connect with the world but always entertaining in his first-person account of his New York environment, his fractured family, his disastrous trip to the nation's capital, and his ongoing bouts with psychoanalysis. In the process he dramatizes the ambivalences and uncertainties of adolescence in ways that both teen and adult readers will savor and remember."—Michael Cart, Booklist (starred review)

Listen to author Peter Cameron talk about his young adult novel Someday This Pain Will Be Useful to You. In this author interview, Cameron talks about his character James and how he came to write this coming of age novel.

PETER CAMERON is the author of several novels, including Andorra and The Weekend. He lives in New York City.

Press founded by the author