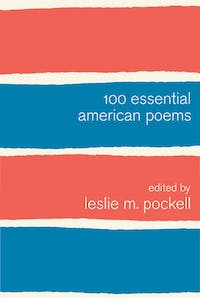 The understanding of the United States—its history, its traditions, even the distinctly American voice—is largely determined by literature. Gathered in this rewarding and thought-provoking book are poems that have been essential components of our common American culture, from the earliest days of the nation through canonic works of the nineteenth century and up to the present day. 100 Essential American Poems includes works by such familiar figures as Longfellow, Poe, and Whitman, and popular classics like "A Visit from St. Nicholas" and "Casey at the Bat." It also features passionate outcries from poets like Paul Laurence Dunbar and Langston Hughes that highlight our ongoing national racial tensions, and poems by such women as Anne Bradstreet, Emily Dickinson, and Edna St. Vincent Millay that supply a distinctly female perspective on American life. Also included are the lyrics of such expressions of the American spirit as "Yankee Doodle," "The Star-Spangled Banner" and "This Land Is Your Land," which represent another facet of American literary tradition! The immortal poems and songs included here, each preceded by an illuminating headnote, will remind the reader of the richness and variety of the poetry of America and its people.

"Pockell, associate publisher at Time Warner Books Group, focuses on poems that have fueled the American identity. Covering 400 years, the poems range from classic, to familiar (and for nostalgics, poems most likely memorized and recited), to those that touch upon the seminal events in America's history. The collection aims to present an evolving American 'voice' while following the country's growth in human rights, feminism and diversity. A short author bio prefaces each selection, beginning with the 17th century's Anne Bradstreet, who celebrates being female in a harsh environment. Well known names like Herman Melville, Emily Dickenson, William Carlos Williams, Langston Hughes, Sylvia Plath are represented by their seminal works, and the beauty of this collection is the coming together of the best loved poems of the best loved American poets. A work that serves as reference, comfort, and a reminder poetry's significance in the everyday experience of American life, this is a volume worthy of any shelf."—Publishers Weekly (starred review)

"From the colonial period to the present, the focus in this winning collection is on works that are 'essential' to a full appreciation of our national culture and character. Pockell's aim is to present canonical verse, with an eye toward multi-ethnic, multicultural, and multigenerational selection. In this he is mostly successful. Readers will find the golden nuggets of such giants as Edgar Allan Poe, Walt Whitman, Emily Dickinson, and Robert Frost, and works from what some might consider a second tier of poets: John Greenleaf Whittier, Oliver Wendell Holmes, Edgar Lee Masters, and Lowell . . . And then there are the entries that make this book stand apart from similar collections: poems and lyrics with little or no literary merit. Among these are 'Yankee Doodle Dandy,' 'Go Down Moses,' 'Follow the Drinking Gourd,' 'Casey at the Bat,' Robert Johnson's 'Cross Roads Blues,' and Woody Guthrie's 'This Land Is Your Land.' Some welcome surprises are Eugene Field's 'Little Boy Blue,' Amy Lowell's 'A Decade,' and 'Sound off Marching Cadence Count' . . . This volume deserves a place in most poetry collections."—Robert Saunderson, formerly at Berkeley Public Library, California, School Library Journal

Table of Contents
Introduction
The Prologue by Anne Bradstreet
The Author to Her Book by Anne Bradstreet
Before the Birth of One of Her Children by Anne Bradstreet
To My Dear and Loving Husband by Anne Bradstreet
Amazing Grace by John Newton
Yankee Doodle Dandy (traditional)
The Star-Spangled Banner by Francis Scott Key
A Visit from St. Nicholas by Clement Clarke Moore
Thanatopsis by William Cullen Bryant
Concord Hymn by Ralph Waldo Emerson
Paul Revere's Ride by Henry Wadsworth Longfellow
The Village Blacksmith by Henry Wadsworth Longfellow
A Psalm of Life by Henry Wadsworth Longfellow
Barbara Frietchie by John Greenleaf Whittier
Snow-Bound by John Greenleaf Whittier
Old Ironsides by Oliver Wendell Holmes
The Chambered Nautilus by Oliver Wendell Holmes
The Deacon's Masterpiece, or The Wonderful "One-Hoss Shay" by Oliver Wendell Holmes
The Raven by Edgar Allan Poe
To Helen by Edgar Allan Poe
The Bells by Edgar Allan Poe
What Is So Rare As a Day in June from "The Vision of Sir Launfal" by James Russell Lowell
Billy in the Darbies by Herman Melville
What is the grass from Leaves of Grass by Walt Whitman
Out of the Cradle Endlessly Rocking by Walt Whitman
Crossing Brooklyn Ferry by Walt Whitman
A Noiseless Patient Spider by Walt Whitman
I Hear America Singing by Walt Whitman
When I Heard the Learn'd Astronomer by Walt Whitman
When Lilacs Last in the Dooryard Bloom'd by Walt Whitman
Battle-Hymn of the Republic by Julia Ward Howe
Go Down, Moses (traditional)
Follow the Drinking Gourd (traditional)
Jeanie with the Light Brown Hair by Stephen C. Foster
Old Folks at Home by Stephen C. Foster
Wild nights!—wild nights! by Emily Dickinson
There is no frigate like a book by Emily Dickinson
"Hope" is the thing with feathers by Emily Dickinson
I taste a liquor never brewed by Emily Dickinson
I'm nobody! Who are you? by Emily Dickinson
Because I could not stop for Death by Emily Dickinson
The Face on the Barroom Floor by Hugh Antoine D'Arcy
Git Along, Little Dogies (traditional)
Sioux Ghost Dance (translated by James Mooney)
The New Colossus by Emma Lazarus
Little Boy Blue by Eugene Field
Casey at the Bat by Ernest Thayer
Richard Cory by Edwin Arlington Robinson
Anne Rutledge from Spoon River Anthology by Edgar Lee Masters
A Man Said to the Universe by Stephen Crane
In the Desert (from The Black Riders and Other Lines) by Stephen Crane
The Cremation of Sam McGee by Robert W. Service
The Shooting of Dan McGrew by Robert W. Service
Lift Every Voice and Sing by James Weldon Johnson
We Wear the Mask by Paul Laurence Dunbar
The Congo by Vachel Lindsay
A Decade by Amy Lowell
The Gift Outright by Robert Frost
The Road Not Taken by Robert Frost
Stopping by Woods on a Snowy Evening by Robert Frost
Mending Wall by Robert Frost
Death of the Hired Man by Robert Frost
Chicago by Carl Sandburg
Fog by Carl Sandburg
Grass by Carl Sandburg
The Emperor of Ice-Cream by Wallace Stevens
Thirteen Ways of Looking at a Blackbird by Wallace Stevens
Home by Edgar Guest
The Red Wheelbarrow by William Carlos Williams
This Is Just to Say by William Carlos Williams
Ancient Music by Ezra Pound
Trees by Joyce Kilmer
Poetry by Marianne Moore
The Love Song of J. Alfred Prufrock by Thomas Stearns Eliot
The Waste Land by Thomas Stearns Eliot
First Fig by Edna St. Vincent Millay
I, Being Born a Woman and Distressed by Edna St. Vincent Millay
Spring by Edna St. Vincent Millay
Recuerdo by Edna St. Vincent Millay
Second Fig by Edna St. Vincent Millay
Résumé by Dorothy Parker
Buffalo Bill's by E. E. Cummings
In Just- by E.E. Cummings
Proem: To Brooklyn Bridge by Hart Crane
Dream Deferred by Langston Hughes
Mother to Son by Langston Hughes
Song of the Open Road by Ogden Nash
Reflections on Ice-breaking by Ogden Nash
Cross Roads Blues by Robert Johnson
Stagger Lee (traditional)
One Art by Elizabeth Bishop
This Land Is Your Land by Woody Guthrie
The Death of the Ball Turret Gunner by Randall Jarrell
For the Union Dead by Robert Lowell
We Real Cool by Gwendolyn Brooks
Sound Off Marching Cadence Count (derived from the Duckworth Chant, originally attributed to
Pvt. Willie Duckworth)
The Day Lady Died by Frank O'Hara
A Supermarket in California by Allen Ginsberg
Daddy by Sylvia Plath
Taking Off Emily Dickinson's Clothes by Billy Collins

Leslie M. Pockell is an editor at a major publishing house in New York. He is has compiled several highly acclaimed poetry collections, including the bestselling The 100 Best Poems of All Time.