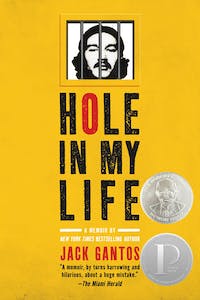 In the summer of 1971, Jack Gantos was an aspiring young writer looking for adventure, cash for college tuition, and a way out of a dead-end job. For ten thousand dollars, he agreed to help crew a boat loaded with drugs from the Virgin Islands to New York City, setting sail on an ill-fated expedition that eventually landed him in federal prison.

"[Gantos's] account is remarkably free of both self-pity and self-censorship . . . This is a tale of courage and redemption, proving that a bad start in life does not have to lead to a bad life story."—The New York Times Book Review

"Jack Gantos is not just a writer—something he dreamed about from childhood. He's a National Book Award finalist, a Newbery Honor medalist and a university writing instructor. In this tough, sad, funny memoir, he tells how he got there."—The Washington Post Book World

"A memoir, by turns harrowing and hilarious, about a huge mistake."—Miami Herald

"Gantos really is Everyman, but an Everyman who has landed himself into a deeper pit than most. What separates Gantos is the determination that took him out of his dreams and into a successful life as a writer. Those writerly skills are in full evidence here, in this thoughtful and provocative memoir as valuable to those who have never heard of Gantos as to those who have read all of his books."—Hyde Park Review of Books

"'We didn't so much arrive at our destinations as aim and crash into them like kamikaze yachtsmen.' So Gantos describes himself as a 20-year-old about to be arrested and imprisoned for smuggling two thousand pounds of hashish from St. Croix to New York City. Young Jack seems to share with his fictional characters—Joey Pigza and Jack Henry—a blithe disregard for the consequences of wild behavior. Readers follow him from a seedy motel run by the great-great-granddaughter of Davy Crockett to a Keystone Kops adventure on the sea, from a madcap escape from FBI and Treasury agents to his arrest and trial, represented by his lawyer, Al E. Newman. This true tale of the worst year in the author's life will be a big surprise for his many fans. Gantos has the storyteller's gift of a spare prose style and a flair for the vivid simile: Davy has 'brown wrinkled skin like a well-used pirate map'; a prisoner he met was 'nervous as a dragonfly'; another strutted 'like a bowlegged bulldog.' This is a story of mistakes, dues, redemption, and finally success at what he always wanted to do: write books. The explicit descriptions of drug use and prison violence make this a work for older readers. Not the usual 'How I Became A Writer' treatise, it is an honest, utterly compelling, and life-affirming chronicle of a personal journey for older teens and adults."—Kirkus Reviews

"Jack Gantos' riveting memoir of the 15 months he spent as a young man in federal prison for drug smuggling is more than a harrowing, scared-straight confession: it is a beautifully realized story about the making of a writer. As Gantos himself notes: 'It [prison] is where I went from thinking about becoming a writer, to writing.' His examination of the process—including his unsparing portrayal of his fears, failings, and false starts—is brilliant and breathtaking in its candor and authenticity. Particularly fascinating is his generous use of literary allusions to everything from Baudelaire to Billy Budd, which subtly yet richly dramatize how he evolved from a reader who became a character in the books he was reading to a writer and a character in his own life story. Gantos' spare narrative style and straightforward revelation of the truth have, together, a cumulative power that will capture not only a reader's attention but also empathy and imagination. This is great for every aspiring writer and also a wonderful biography for teens struggling to discover their deepest, truest selves."—Michael Cart, Booklist (starred review)

"The compelling story of the author's final year in high school, his brushes with crime, and his subsequent incarceration. Gantos has written much about his early years with his eccentric family, and this more serious book picks up the tale as they moved to Puerto Rico during his junior year. He returned to Florida alone, living in a seedy motel while he finished high school and realized that his options for college weren't great. A failed drug deal cost him most of his savings and he joined his family, now in St. Croix, where he accepted an offer of $10,000 to help sail a boat full of hash to New York. He and his colleagues were caught, and as it turns out, he was in more trouble than he anticipated. Sent to federal prison for up to six years, Gantos landed a job in the hospital section, a post that protected him from his fellow inmates, yet allowed him to witness prison culture firsthand. Much of the action in this memoir—some of it quite raw and harsh—will be riveting to teen readers. However, the book's real strength lies in the window it gives into the mind of an adolescent without strong family support and living in the easy drug culture of the 1970s. Gantos looks for role models and guidance in the pages of the books he is reading, and his drive to be a writer and desire to go to college ultimately save him."—Barbara Scotto, School Library Journal

"After penning a number of novels for preteens, including the Joey Pigza books and the Jack series, Gantos makes a smooth transition as he addresses an older audience. He uses the same bold honesty found in his fiction to offer a riveting autobiographical account of his teen years and the events may well penetrate the comfort zone of even the most complacent young adults. The memoir begins with the dramatic image of the author as a young convict ('When I look at my face in the photo I see nothing but the pocked mask I was hiding behind'). The book then goes on to provide an in-depth examination of the sensitive and intelligent boy residing behind a tough façade. Inspired by the words and lives of some of his favorite American authors, Gantos sought adventure after leaving high school. He eagerly agreed to help smuggle a shipment of hashish from Florida to New York without giving thought of the possible consequences. Knowing that the narrator is destined to land in jail keeps suspense at a high pitch, but this book's remarkable achievement is the multiple points of view that emerge, as experiences force a fledgling writer to continually revise his perspective of himself and the world around him. The book . . . provides much food for thought and fuel for debate. It will leave readers emotionally exhausted and a little wiser."—Publishers Weekly

From Hole in My Life

From my cell window I could see a line of houses in the distance. All week the people had been putting up Halloween decorations. We didn't celebrate Halloween in prison . . . or, I should say, every day...

Jack Gantos has written books for people of all ages, from picture books and middle-grade fiction to novels for young adults and adults. His works include Hole in My Life, a memoir that won the Michael L. Printz and Robert F. Sibert Honors; the Joey Pigza series, which include a Newbery Honor book and a National Book Award Finalist; Dead End in Norvelt, winner of the Newbery Medal and the Scott O'Dell Award for Historical Fiction; and the Rotten Ralph series.