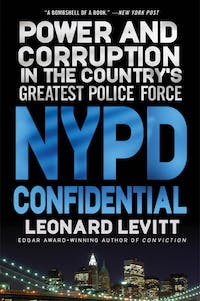 For years, the police commissioner and the mayor of New York City have duked it out for publicity, credit, and power. Some have translated their stardom into success after leaving office, while others have been hung out to dry. In the battle for control of the country's most powerful police force, these high-status government officials have often chosen political expediency over public honesty. The result is a legacy of systemic corruption and cover-ups that is nothing less than shocking.

Respected journalist Leonard Levitt has covered the NYPD for New York's Newsday and the New York Post among other papers. His columns have made him persona non grata in police headquarters. In NYPD Confidential, he reveals everything he's discovered throughout his decades-long career. With amazing details of backroom deals and larger-than-life powerbrokers, Levitt lays bare the backstabbing, power-grabs, and chaotic internal investigations that have run the NYPD's reputation into the ground in the past—and the forces conspiring to do so once again.

"Leonard Levitt has been covering the politics and personal relationships of One Police Plaza since 1983, giving him access to the city's governing elite—connections he puts to excellent use here. The book examines New York's heralded drop in crime in the nineties (with an egomaniacal Rudy Giuliani center stage), and it's fascinating to see how toxic the atmosphere at NYPD headquarters became despite—or because of—that success. Levitt addresses the big issues via an engaging, character-driven narrative and wisely never resorts to the macho melodrama that poisons so much of tabloid police reporting. "—Ben Mathis-Lilley, New York magazine

"This is a veteran reporter's inside story about the New York City Police Department. It's a fascinating read. I couldn't put it down. Leonard Levitt delves into the murky backroom deals of City Hall, and the missing pieces to the NYPD's corruption fall skillfully into place."—Frank Serpico

"One thing you can be sure of: 35,000 New York cops always were the first to read Lenny Levitt's stories every time. It was true comedy to watch him, small and with a big pad, go down the hall in headquarters as top officials, brass jangling, egos scraping the ceiling, flew into their offices. Levitt's book also is depressing when he tells of an innocent being shot. Amadou Diallo was shot forty-one times by police in his Bronx doorway. The case was moved to Albany, where the only thing you could say about a cop was 'not guilty.' You will read every page of this book, as I did."—Jimmy Breslin

"When you read about the political and personal agendas at the top of the NYPD, it makes you feel sorry for the honest cops who signed on to protect and serve."—Bob Ingle, coauthor of The Soprano State

"Len Levitt's behind-the-scenes account of the NYPD is in the tradition of hard-hitting New York police reporters such as Jacob Riis and Lincoln Steffens. I find his work fascinating."—Thomas Reppeto, former president of the Citizens Crime Commission of New York City, and coauthor of NYPD: A City and Its Police

"A veteran reporter chronicles rampant New York City police corruption during the administrations of Mayors Rudy Giuliani and Michael Bloomberg. Since 1994, Edgar Award winner Levitt has written a hard-hitting column about the NYPD, first for Newsday and, since 2005, at NYPDConfidential.com. (The author lost his press pass to One Police Plaza in 2007.) Based on mostly anonymous interviews with police officials, his book details the latest scandals in a culture of corruption and cover-up as old as the 36,000-member department. Behind it lies the well-known loyalty of police officers (the 'Blue Wall of Silence'), which, says Levitt, has led to 'horrendous acts of corruption and brutality.' Although the NYPD refuses to acknowledge it, increasing numbers of cops are being accused of corruption, he says, while the city's media, in a 'post-9/11 swoon' over New York's finest, look the other way. Beyond recounting many familiar scandals, Levitt analyzes the endless posturing and politicking among city officials and police brass, whose egos and agendas clash endlessly while public-information officers scurry to manipulate media coverage. The author describes how Mayor Giuliani and Police Commissioner William Bratton jockeyed for credit as they pushed their 'zero tolerance' policing; how the mean, humorless Commissioner Howard Safir increased racial tensions by turning police officers into 'cowboys'; how Commissioner Bernard Kerik, Giuliani's former bodyguard and President George W. Bush's nominee to head the Department of Homeland Security, self-destructed in a series of scandals; and how Commissioner Ray Kelly's counterterrorism push has turned the department into a 'mini CIA' with little oversight. Levitt also offers bright snapshots of such characters as Jack 'the Jackster' Maple, a foppish deputy commissioner who developed a computerized system for collecting statistics on crime patterns. Eye-opening reporting on America's largest and most powerful police force."—Kirkus Reviews

"When he covered the NYPD for Newsday, Levitt had access to all levels of the country's largest law enforcement agency, and now the Edgar winner catalogues dirty cops and departmental scandals. While he doesn't withhold credit where it's due (such as in the World Trade Center attacks), Levitt is most interested in the corrupt underbelly of America's largest police department. '[S]acrificing truth for image while acting in secrecy' is the department's M.O., he says. Both the 1970s Knapp Commission corruption hearings and the Mollen Commission in the 1990's underscored that dirty cops weren't confined to the lower ranks—the dishonesty reached all the way to the highest echelons. Examining some of the department's most notorious acts of violence—e.g., the torturing of Abner Louima, the shooting death of the unarmed Amadou Diallo—he has little praise for supposedly tough-on-crime mayor Giuliani . . . Levitt's account is an engrossing in-depth look at scandal inside the NYPD."—Publishers Weekly

One Evidence of Things Not Seen

I met Frank Serpico at the Knapp Commission corruption hearings in the fall of 1971. What I remember is how unlike a cop he seemed, how he kept apart from his so-called fellow...

LEONARD LEVITT wrote the column, One Police Plaza for Newsday about the New York City police department from 1995 to 2005. He has also worked as a reporter for the Associated Press and the The Detroit News, as a correspondent for Time magazine, and as the investigations editor of the New York Post. His work has appeared in Harper's magazine, Esquire, and the New York Times Magazine. He received an Edgar Award for his nonfiction work Conviction. He currently runs www.nypdconfidential.com. He lives in Stamford, Connecticut.