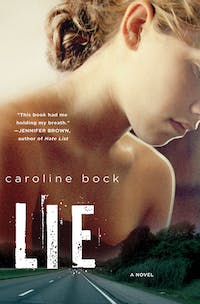 Seventeen-year-old Skylar Thompson is being questioned by the police. Her boyfriend, Jimmy, stands accused of brutally assaulting two young El Salvadoran immigrants from a neighboring town, and she's the prime witness. Skylar is keeping quiet about what she's seen, but how long can she keep it up?

When her mother died, he was the only person who made her feel safe, protected from the world. But when she begins to appreciate the enormity of what has happened, especially when Carlos Cortez, one of the victims, steps up to demand justice, she starts to have second thoughts about protecting Jimmy. Jimmy's accomplice, Sean, is facing his own moral quandary. He's out on bail and has been offered a plea in exchange for testifying against Jimmy.

Sean must decide whether or not to turn on his friend in order to save himself. But most important, both he and Skylar need to figure out why they would follow someone like Jimmy in the first place.

"LIE is a gripping exploration of right and wrong, truth and lie, and that ultimately when you search your soul, you're not always prepared for what you find there. This book had me holding my breath . . . Bock creates characters who you not only want to believe but want to believe in, and real suck-in-your-breath moments that remind you what good storytelling is all about."—Jennifer Brown, author of Hate List

"This is a strong, well-told, sorrowful story based on facts. LIE broke my heart."—Carol Lynch Williams, author of The Chosen One

"An intensely moving, beautifully written novel . . . LIE is a pertinent novel for our times told with the same unflinching honesty and riveting intimacy that once made To Kill a Mockingbird such a classic."—Suzanne Weyn, author of The Bar Code Tattoo

"This effective, character-driven, episodic story examines the consequences of a hate crime on the teens involved in it . . . Readers get to know the involved teenagers and their families, as well as the victim, his brother and their mother. By portraying, simply and without comment, the reactions of the various characters, the author conveys the horror of the crime and the devastating effects on all involved, including those responsible . . . Realistic and devastatingly insightful, this novel can serve as a springboard to classroom and family discussions. Unusual and important."—Kirkus Reviews (starred review)

"Suspenseful and thought-provoking, this is a compellingly readable novel with a challenging theme and memorable characterizations. A terrific choice to spark discussion and debate."—Booklist (starred review)

"Told in several voices, Bock creates a suspenseful, gripping, and powerful novel that will keep readers on their toes."—Library Journal (starred review)

"Bock's (Confessions of a Carb Queen) first YA novel is a smart, topical story about a racially motivated hate crime, its far-ranging consequences, and the community determined to keep it under wraps. Skylar Thompson, a sensitive and complex loner, is deeply reliant on her boyfriend, Jimmy Seeger, a cocky, clean-cut jock. Shortly before their high school graduation, Jimmy and his best friend Sean are arrested for the vicious beating of Arturo Cortez, a young El Salvadoran mason, who subsequently dies of his injuries. Charismatic but cruel, Jimmy has been leading a gang that goes ‘beaner-hopping' on Saturday nights, assaulting Latinos for sick thrills. Skylar, who witnessed Jimmy's unprovoked attack on Arturo, suffers a crisis of conscience over whether to cover for her boyfriend; the lies Skylar and others are pressured to tell cut through the town like the Long Island Expressway the title plays on. Avoiding preachiness, Bock handles the novel's multiple viewpoints exceptionally well, rotating among the painfully believable voices of high school students and adults. Her characters may keep the truth inside, but their story reads like a confessional."—Publishers Weekly (starred review)


I should be in calculus, reviewing for the final, not at the police station. Or I should be in the school parking lot, deciding on whether to cut class and go to the beach with the other seniors. Or at the diner...

Prior to focusing on her writing, Caroline Bock headed the marketing and public relations departments at Bravo and IFC cable networks. She is a graduate of Syracuse University, where she studied creative writing with Raymond Carver, and The City College of New York, where she earned a MFA in fiction. She lives in New York on Long Island.