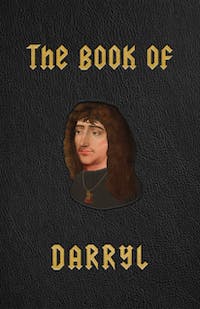 Darryl’s friendless. Bored out of his skull. It’s the middle of summer, in the middle of the desert, in the middle of a fly-blown suburb of Roman-occupied Nazareth. Tough times for a sixteen-year-old boy in any era, never mind two millennia ago, when the only thing to look forward to is the next sandstorm, and you’re spending every waking moment worrying that the spots on your forehead are for sure signs of leprosy. But everything changes when Darryl meets his new refugee neighbor, Jay, who just so happens to be the messiah before he was *the Messiah.*

Jay brings good news to Darry’s life and soaring, otherworldly vocals to his band with fellow teen Nazarenes Mary and Jude. Together, they help each other survive life in the year 16 A.D.—and miraculously, they invent a beguiling new musical form that they call METAL, one of many epic revelations in this heretofore unheralded early chapter in the greatest story ever told.

This special edition of The Book of Darryl is illuminated by world-famous GIF artist Scorpion Dagger, with images that come to animated life—accompanied by a splendorous heavy metal score—through augmented reality, in a lost gospel here resurrected by leading Darryl scholars and storytelling pioneers Matt Bate and the Goggles.

"An earnest but eccentric and aesthetically anarchic take on Christianity’s familiar mythos."—Kirkus Reviews

The Goggles are Paul Shoebridge and Michael Simons, award-winning creators who have spent their professional lives telling stories in compelling new ways. Their interactive documentary, Welcome to Pine Point, received more than a dozen international awards. They are coauthors of the book I Live Here, and their work has been featured on CNN and MTV, and in documentaries for BBC, PBS, and Dutch National Television.

Closer Productions' Matt Bate is a writer, director and producer working across drama, documentary and VR. His debut feature film Shut Up, Little Man! premiered in competition at Sundance 2011, and his sophomore film Sam Klemke’s Time Machine, was selected for Sundance New Frontier 2014.

James Kerr is a digital artist based in Montreal, best known for his animated GIF project Scorpion Dagger, where he mixes cut outs from various paintings from art history to create a world where he comments on our modern age, and pop culture in general. His GIFs have been shown in art galleries throughout North America and Europe.