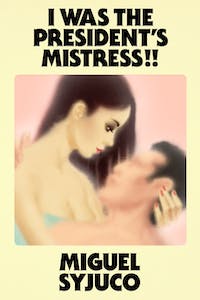 First came the Sexy-Sexygate scandal. Then an impeachment trial. Finally, a battle royale for the presidency. At the center of this political typhoon is Vita Nova, the most famous movie star in the Philippines and a former paramour of the country’s most powerful man. Now, for the first time ever, she bares herself completely in a tell-all memoir that puts the sensational in sensationalistic.

The setting: a sweating, heaving country. The time: right now. The plot: a drug war rages, an assassin brandishes a pistol, a damsel rises from ashes to power, and a government teeters on the brink. Among the players: a dreamer who boxed and acted his way to the presidency, his Koran-toting nemesis in the senate, a horny bishop, a cowboy turned warlord, a poor little rich boy dying with his dynasty, a washed-up reporter redeemed by one last scoop, a high-school sweetheart driven mad by decades of disappointment, and an American naval officer tempting our heroine with a way out. As Vita warns, viewer discretion is advised.

In this masterful and audacious novel, Miguel Syjuco’s signature style—hilarious, insightful, playful, provocative—animates thirteen indelible voices whose stories present a cross-section of a complicated society. I Was the President’s Mistress!! hurtles headlong into love, politics, faith, history, memory, and the ongoing war over who will tell the stories the world shall know as truth.

“Effervescently entertaining . . . A dizzying parody of contemporary Pinoy political history . . . Miguel Syjuco’s grand effort in rendering our country large if specific, not only to the latticework of libido and politics, deserves universal reckoning.”—Alfred A. Yuson, The Philippine Star

“A caustic exposé of the state of the nation . . . I Was the President’s Mistress!! turns up the heat, Syjuco unleashing it to sizzle with lurid sex, Rabelaisian jokes and bacchanalia; douse in vitriol a scandal-lashed government; tear down racists and misogynists; serve as an ironic equal-opportunity goader of assorted belief systems; and scathingly lampoon history’s parade of corrupt Filipino statesmen . . . Comparisons with Ulysses are inevitable . . . It encapsulates a zeitgeist reaching far beyond the Philippines.”—Stephen McCarty, South China Morning Post

“As crazy and irresistible as the title suggests . . . An infectious satire of Philippine politics and society . . . Profanely funny . . . It takes narrative guts, real outrage, and sense of design to pull this off. If his first novel felt like Syjuco was still tiptoeing around the conventions of the form, IWTPM!! feels like him just gloriously, fiercely letting loose. For all that, IWTPM!! is more polarising, more powerful, and better than Ilustrado.”—Ruel S. De Vera, Philippine Daily Inquirer

“A fine romp . . . The joy is in the writing, lush and complex, structured in the manner of a mille crepe cake: top layer, the hijinks; slice deeper and taste the vicissitudes and outrages of Philippine society . . . What makes the book a worthwhile read are the serious discourses that show its point is to skewer the powerful and mighty and shake the sleepers awake.”—Jenny Ortuoste, Manila Standard

“This brilliant black comedy is a wild, and wildly unpredictable, ride through the dark side of the Philippines. Miguel Syjuco is his country’s most original and unflinching literary voice.”—Salman Rushdie, author of Quichotte

"A super-typhoon of a novel. A Babel of rogues, survivors and shape-shifters. A polemic against corruption and greed. A sassy, swerving mini-series, touched by grace and beauty. A Filipino Bonfire of the Vanities for our beleaguered times. An uncompromising work of art."—David Mitchell, author of Utopia Avenue

“An urgent book, and a necessary one: a Tyrants Destroyed for the twenty-first century.”—Tom McCarthy, author of The Making of Incarnation

“Nobody writes like Miguel Syjuco. A triumph.”—Elif Batuman, author of The Idiot

"I Was the President’s Mistress!! is a tour de force. Virtuosic, kinetically funny Miguel Syjuco can riff on just about anything—from celebrity gossip to Internet troll farms, pop music to the Philippine electoral circus—as he explores our era’s thorniest questions of class, gender, power, and violence. At the heart of this blistering satire is Vita Nova, a heroine for the ages, whose rise to fame and epic romantic odyssey stop the breath and stoke the conscience like nothing else I’ve ever read."—Mia Alvar, author of In the Country

“[I Was the President’s Mistress!!] has a headlong, assertive energy and a transgressive bent . . . Syjuco’s most irreverent set pieces reveal how cultures can get a woman like Vita exactly backward—rather than the know-nothing sinner she’s dismissed as, she’s the scapegoat for everyone else’s greed and ineptitude . . . Ingenious.”—Kirkus Reviews

"Rambunctious, uninhibited satire . . . Those willing to go along for a wild ride ought to be entertained by this tale of dirty tricks and dirty deeds."—Publishers Weekly

I know you’re wondering—yes, it’s true: his birdie is thick, as he’s always saying, but like a thumb is to a finger,...

Miguel Syjuco is a Filipino author, journalist, civil society advocate, and professor at New York University Abu Dhabi. His debut novel, Ilustrado, was a New York Times Notable Book of the Year and won both the Man Asian Literary Prize and the Grand Prize at the Palanca Awards, his country’s top literary honor. He has worked as a contributing opinion writer for The International New York Times, written for many of the world’s most respected publications, and spoken on Philippine politics and culture at the World Forum for Democracy and the World Economic Forum. He currently serves on the advisory councils of the Civitella Ranieri Foundation, an international arts residency program, and the Resilience Fund, a project by the Global Initiative Against Transnational Organized Crime to empower communities most threatened by criminality.