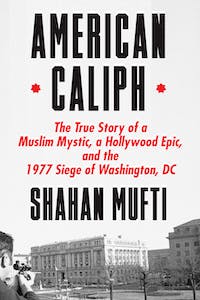 Late in the morning of March 9, 1977, seven men stormed the Washington, D.C., headquarters of B’nai B’rith International, the largest and oldest Jewish service organization in America. The heavily armed attackers quickly took control of the building and held more than a hundred employees of the organization hostage inside. A little over an hour later, three more men entered the Islamic Center of Washington, the country’s largest and most important mosque, and took hostages there. Two others subsequently penetrated the District Building, a few hundred yards from the White House. When a firefight broke out, a reporter was killed, and Marion Barry, later to become mayor of Washington, D.C., was shot in the chest. The deadly standoff brought downtown Washington to a standstill.

The attackers belonged to the Hanafi Movement, an African American Muslim group based in D.C. Their leader was a former jazz drummer named Hamaas Abdul Khaalis, who had risen through the ranks of the Nation of Islam before feuding with the organization’s mercurial chief, Elijah Muhammad, and becoming a spiritual authority to Kareem Abdul-Jabbar. Like Malcolm X, Khaalis had become sharply critical of the Nation’s unorthodox style of Islam. And, like Malcolm X, he paid dearly for his outspokenness: In 1973, followers of the Nation murdered seven Hanafis at their headquarters, including several members of Khaalis’s family. When they took hostages in 1977, one of the Hanafis’ demands was for the murderers, along with Muhammad Ali and Elijah’s son, to be turned over to the group to face justice. They also demanded that the American premiere of Mohammad: Messenger of God—an epic about the life of the prophet Muhammad financed and supported by the Libyan leader Muammar Gadhafi—be canceled and the film destroyed. The lives of 149 hostages hung in the balance, and the United States’ fledgling counterterrorism forces—as yet untested—would have to respond.

Shahan Mufti’s American Caliph gives a full account of the largest ever hostage taking on American soil and of the man who masterminded it. Informed by extensive archival research and access to hundreds of declassified FBI files, American Caliph is a riveting true-crime story that sheds new light on the disarray of the 1970s and its ongoing reverberations.

“[American Caliph] packs a lot into its fast-turning pages . . . Shahan Mufti pulls out all the stops to tell the extraordinary but largely forgotten tale of a man deranged by grief and ambition . . . Mufti artfully weaves wider historical events into his story . . . These elements supply the rich context of a saga that builds in tension until the last gripping moments.”—The Economist

"[American Caliph] tells the extraordinary story of a dramatic hostage incident . . . Mufti does a terrific job of putting [the Hanafie siege] in the context of the times, of events and tensions both national and international."—Claire Messud, Harper's

"Mufti immerse[s] himself in the story . . . [His] efforts add up to the most complete picture yet of what happened—and why it mattered."—Andrew Beaujon, Washingtonian

"[American Caliph] richly recounts an event that was years in the making, unearthing new information and masterfully tying together multiple storylines stretching from D.C. to the Middle East and involving everyone from local police to a Libyan dictator . . . Mufti meticulously builds the story of the 1977 siege through the different threads that led to it."—Martin Austermuhle, DCist

“American Caliph is a kaleidoscopic and utterly enthralling tale of an audacious crime that forever transformed our national conversations about race, terrorism, and Islam. Shahan Mufti elegantly weaves together the stories of a slew of fascinating characters, ranging from petty tyrants to legendary athletes, to create a stranger-than-fiction saga that will make you gasp and marvel. This is one of the mightiest feats of journalism I’ve ever had the good fortune to savor.” —Brendan I. Koerner, author of The Skies Belong to Us and Now the Hell Will Start

"A fast-paced thriller that reads like the best John Le Carre novels . . . except this story isn’t fiction. American Caliph is a wild whirlwind of a book with a crazy cast of characters—some of them familiar, all of them unforgettable—and a plot that would be hard to believe if it weren’t all true. Shahan Mufti is a terrific writer."—Reza Aslan, author of Zealot and An American Martyr in Persia

"American Caliph is a fascinatingly detailed retelling of one of the most mystifying American dramas of the 1970s. Occurring in the early days of the Carter presidency, the violent Hanafi Muslim hostage crisis that took place in the nation’s capital transfixed American society, only to be forgotten again as left-right Cold War confrontations flared and were replaced by new showdowns with militant Islam. With a cast of characters that includes Malcom X, Elijah Muhammad, and the self-proclaimed American 'Caliph,' Hamaas Abdul Khaalis himself—along with superstar athletes Muhammad Ali and Kareem Abdul Jabbar—American Caliph reveals how the struggle for Black civil rights also nourished the rise of an American Islamic movement, and how, to an uncanny degree, its early ructions offered a foreshadowing of things to come, in America and beyond. A necessary, immensely readable book for troubled times."—Jon Lee Anderson, staff writer for The New Yorker and author of Che and The Fall of Baghdad

"American Caliph is a meticulously reported and gripping account of one of the more bizarre chapters of U.S. history. In this unforgettable tale, Mufti weaves together different threads of American Islam that emerged in the 60s and 70s, and intersected in a harrowing stand-off in Washington, D.C. Mufti brilliantly brings to life a part of our country's past that has been largely forgotten, but whose reverberations are felt to this day."—Rozina Ali, contributing writer at The New York Times Magazine

"Shahan Mufti’s account of this harrowing crisis over religious identity and communal alienation is as timely today as ever. In compelling prose, the author renders the life of Hamaas Abdul Khaalis and his uniquely American journey to Islam, exploring vivid, overlapping worlds of music, spirituality, and activism. It is at once a tragic history of how the global forces of sectarianism can inflame local hatreds and a window upon the social dynamics of US society that produced some of the most important figures of the African American Islamic tradition."—Claude A. Clegg III, author of An Original Man: The Life and Times of Elijah Muhammad

"Mining thousands of documents from FBI files and Department of Justice records, trial transcripts, and interviews . . . journalist Mufti fashions a tense, often grisly account of the events leading up to the two-day standoff and the arrests, trial, and aftermath . . . [An] engrossing work of investigative journalism."—Kirkus Reviews

"In crackling prose, journalist Mufti delves into Khaalis’ connections to Elijiah Muhammad’s Nation of Islam . . . Mufti deftly weaves America’s cynical Middle East policy, the star quality of Muhammad Ali and Kareem Abdul-Jabaar, and the tortured production of a biopic about the prophet Muhammad into this real-life thriller." —Booklist

"Mufti skillfully explains what led to the 1977 attack and three-building hostage situation that shut down Washington, DC, for days . . . The hostage siege is narrated in nail-biting detail."—Library Journal


On June 22, 1944, two weeks after Allied forces stormed the beaches of Normandy to liberate France from the Nazis, Hamaas Abdul Khaalis reported to the psychiatric ward of the Station Hospital at...

Shahan Mufti is the chair of the Department of Journalism at the University of Richmond and a former daily news reporter for The Christian Science Monitor. He is the author of The Faithful Scribe: A Story of Islam, Pakistan, Family, and War, and his writing has appeared in Harper’s Magazine, The New York Times Magazine, The Atlantic, and The Nation, among other publications.