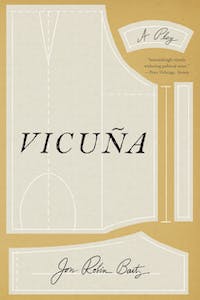 In his Upper East Side atelier, a bespoke tailor, Anselm Kassar, is persuaded by the vulgar real estate mogul turned presidential candidate Kurt Seaman to make him the perfect suit. A suit to “stun them” at the final debate before the election, a suit for him to wear while he takes on his unnamed female opponent. Kassar agrees to make Seaman a suit with magical powers of persuasion, to allow him to “close the deal with the American people.”

Over the course of three fittings for this exorbitantly expensive and totemic vicuña suit, Seaman cajoles and spars with the tailor and his young Muslim apprentice, Amir. Amir’s challenges to Seaman and Seaman’s daughter Srilanka over the dangerously xenophobic and inflammatory rhetoric coming out of the campaign make the fittings increasingly volatile in the genteel atelier. Vulnerabilities are exploited masterfully by the candidate, in the manner of a true sociopath with a perfect instinct for other people’s weaknesses.

Coming out of an election season that laid bare the rage in much of America, Jon Robin Baitz’s Vicuña is an astute satire of what—or who—it takes to bring those anxieties to the fore.


(Early October in Manhattan. A bespoke men’s tailor shop on the Upper East Side. It is late afternoon and we are on the second floor of a brownstone in the Sixties. Some street sounds waft up. Large...

Jon Robin Baitz was born in Los Angeles in 1961, and grew up there, in Rio de Janeiro, and in South Africa. His plays have been extensively produced on and off Broadway and throughout the world. He is the author of The Film Society, The Substance of Fire, Three Hotels, A Fair Country, The Paris Letter, and Other Desert Cities. He created the ABC TV show Brothers & Sisters, which ran for five seasons from 2007 to 2012, and the miniseries The Slap. He is a Tony nominee for the Broadway production of Other Desert Cities, a two-time Pulitzer Prize finalist, a Guggenheim fellow, and an American Academy of Arts and Letters award winner.