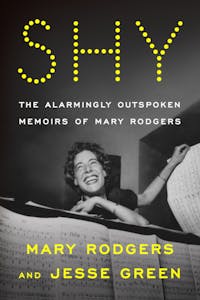 “What am I, bologna?” Mary Rodgers (1931–2014) often said. She was referring to being stuck in the middle of a talent sandwich: the daughter of one composer and the mother of another. And not just any composers. Her father was Richard Rodgers, perhaps the greatest American melodist; her son, Adam Guettel, a worthy successor. What that leaves out is Mary herself, also a composer, whose musical Once Upon a Mattress remains one of the rare revivable Broadway hits written by a woman.

Shy is the story of how it all happened: how Mary grew from an angry child, constrained by privilege and a parent’s overwhelming gift, to become not just a theater figure in her own right but also a renowned author of books for young readers (including the classic Freaky Friday) and, in a final grand turn, a doyenne of philanthropy and the chairman of the Juilliard School.

But in telling these stories—with copious annotations, contradictions, and interruptions from Jesse Green, the chief theater critic of The New York Times—Shy also tells another, about a woman liberating herself from disapproving parents and pervasive sexism to find art and romance on her own terms. Whether writing for Judy Holliday or Rin Tin Tin, dating Hal Prince or falling for Stephen Sondheim over a game of chess at thirteen, Rodgers grabbed every chance possible—and then some.

Both an eyewitness report from the golden age of American musical theater and a tale of a woman striving for a meaningful life, Shy is, above all, a chance to sit at the feet of the kind of woman they don’t make anymore—and never did. They make themselves.

"'Outspoken' is a good word for [Rodgers's] memoir, co-authored by New York Times theater critic Jesse Green. You just can't imagine anybody saying the things she says about her father in a polite conversation, and she is just breathtaking in her takedowns of absolutely everybody you regard as remotely famous from that era . . . It's hilarious, for 400 pages."—Bob Mondello, NPR

"Snarky, often ribald, always revealing . . . [Jesse Green] quotes Mary's reaction to the very first draft pages of this unique memoir, the only section she lived to read: 'Make it funnier. Make it meaner.' She would be well pleased."—David M. Alpern, East Hampton Star

"Shy is a fascinating first-person account of a vital period in American theatre history . . . worth reading as an account of an unusual, sometimes difficult, but always intriguing life."—Fiona McQuarrie, PopMatters

"Shy is a treasure chest of goodies for fans of the New York performing arts world at mid-century and just beyond . . . Readers besotted with Old Broadway would probably inhale Rodgers's memoir no matter its quality, but Sky has the added bonus of being note-perfect."—Shelf Awareness

"Shy is the most hilarious, wise, candid and tender memoir I have ever read. And with the best footnotes EVER!"—André Bishop, Artistic Director of Lincoln Center Theater

"Mary careens across these pages with her usual wit, wisdom and honesty. It is Mary as we remember her and loved her. Jesse Green, her co-author, deserves much praise for his unique, delightful contribution. One feels that Mary is back with us once again . . . and how lovely is that!"—Julie Andrews

"Having just finished Shy, an extremely funny and always fascinating book, I am very sorry I never met Mary Rodgers. But I do feel as if I have, because Shy provides the appealing and droll voice of Rodgers, alongside Jesse Green’s always knowledgeable and witty commentary. For anyone who loves Broadway, or wants to hear about its heyday from a lifelong insider, this duet of a memoir is a welcome compendium of information, anecdote, gossip, and strong opinions—and never anything less than a tremendously good story."—Meg Wolitzer, author of The Female Persuasion

"I read Shy in two long, delicious gulps. It is an essential show-biz memoir and a complete portrait, with all the contradictions that make a person real. I'm only sorry that there's no more to read."—Ben Brantley, author of The New York Times Book of Broadway: On the Aisle for the Unforgettable Plays of the Last Century

"Reading Shy is like falling into one of the plush sofas in Mary Rodgers’ elegant living room, drink in hand, while she regales the room in her unique voice. She is in a talkative—very talkative—mood and ready to say, well, anything on her bold and fearless mind. All credit to Jesse Green for organizing Mary’s thoughts and opinions into a fascinating book. Shy gives the reader a full-fledged and revealing portrait of an extraordinary, complex person."—Ted Chapin, author of Everything Was Possible: The Birth of the Musical Follies

"[Rodgers's] remembrances are lively, witty, honest, and 'dishy' regarding a host of boldfaced names, both those she loved and those she hated . . . A Broadway tell-all that deserves to become a classic of music theater lore."—Kirkus Reviews (starred review)

"[A] candid, hilarious, and fascinating look at a life lived with honesty and only the occasional regret. Whether Rodgers is recounting her lifelong love for childhood friend Sondheim or describing her perpetually fraught dance with her parents, this will have readers applauding loudly."—Ilene Cooper, Booklist (starred review)

"[A] rollicking posthumous memoir . . . enriched with droll commentary from Green . . . It’s this playful, self-deprecating humor that makes Rodgers’s stories sing, and fans are sure to delight in every witty detail. This has major star power."—Publishers Weekly (starred review)


Daddy is how we have to begin. The only way he knew to have fun with us was by playing ear-training games, challenging us to identify various intervals and, later, chords. He would strike two notes on the...

Mary Rodgers (1931–2014) was an accomplished composer, author, and screenwriter. She was the author of the novel Freaky Friday and its 1976 screenplay adaptation, and of several other novels. Rodgers also wrote the music for Once Upon a Mattress, which was nominated for a Tony Award for Best Musical. She lived in New York City until her death.

Jesse Green is the chief theater critic for The New York Times. From 2013 to 2017 he was the theater critic for New York magazine. Before that, he covered theater and other cultural topics, as well as writing long-form news features, for many national publications. He is the author of the novel O Beautiful and the memoir The Velveteen Father: An Unexpected Journey to Parenthood.