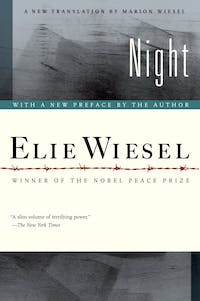 Night is Elie Wiesel's masterpiece, a candid, horrific, and deeply poignant autobiographical account of his survival as a teenager in the Nazi death camps. This new translation by Marion Wiesel, Elie's wife and frequent translator, corrects important details and presents this seminal memoir in the language and spirit truest to the author's original intent. And in a substantive new preface, Professor Wiesel reflects on the enduring importance of Night and his lifelong, passionate dedication to ensuring that the world never forgets man's capacity for inhumanity to man.

Throughout Night, Professor Wiesel addresses many of the philosophical as well as personal questions implicit in any serious consideration of what the Holocaust was, what it meant, and what its legacy is and will be.

Also included in this new edition is his 1986 Nobel Peace Prize acceptance speech.

"To the best of my knowledge no one has left behind so moving a record." —Alfred Kazin

"I gain courage from his courage." —Oprah Winfrey

"Wiesel has taken his own anguish and imaginatively metamorphosed it into art."—Curt Leviant, Saturday Review

"What makes this book so chilling is not the pretense of what happened but a very real description of every thought, fear and the apathetic attitude demonstrated as a response . . . Night, Wiesel's autobiographical masterpiece, is a heartbreaking memoir. Wiesel has taken his painful memories and channeled them into an amazing document which chronicles his most intense emotions every step along the way."—Jose Del Real, Anchorage Daily News

"As a human document, Night is almost unbearably painful, and certainly beyond criticism."—A. Alvarez, Commentary

"To the best of my knowledge no one has left behind him so moving a record."—Alfred Kazin, The Reporter

"[Night] must be read by everyone interested in a respectable destiny for the human family."—Emerson Price, The Cleveland Press

"Elie Wiesel spent his early years in a small Transylvanian town as one of four children. He was the only one of the family to survive what Francois Maurois, in his introduction, calls the 'human holocaust' of the persecution of the Jews, which began with the restrictions, the singularization of the yellow star, the enclosure within the ghetto, and went on to the mass deportations to the ovens of Auschwitz and Buchenwald. There are unforgettable and horrifying scenes here in this spare and sombre memoir of this experience—of the hanging of a child, of his first farewell with his father who leaves him an inheritance of a knife and a spoon, and of his last goodbye at Buchenwald—his father's corpse is already cold—let alone the long months of survival under unconscionable conditions. The author's youthfulness helps to assure the inevitable comparison with the Anne Frank diary although over and above the sphere of suffering shared, and in this case extended—to the death march itself, there is no spiritual or emotional legacy here to offset any reader reluctance."—Kirkus Reviews

THEY CALLED HIM Moishe the Beadle, as if his entire life he had never had a surname. He was the jack-of-all-trades in a Hasidic house of prayer, a shtibl. The Jews of Sighet--the little town in Transylvania where...

Elie Wiesel; A New Translation by Marion Wiesel; With a New Preface by the Author

Elie Wiesel (1928-2016) is the author of more than fifty books, including Night, his harrowing account of his experiences in Nazi concentration camps. The book, first published in 1955, was selected for Oprah's Book Club in 2006, and continues to be an important reminder of man's capacity for inhumanity. Wiesel was Andrew W. Mellon Professor in the Humanities at Boston University, and lived with his family in New York City. He was awarded the Nobel Peace Prize in 1986.