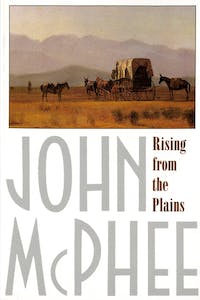 If you like to read about geology, John McPhee's Rising for Plains is an indispensable text on the subject. If, on the other hand, you are not much engaged by the spatial complexities of the science, you could miss a richness if human history that has its place among the strata described. Sometimes it is said of geologists that they reflect in their professional styles the sort of country in which they grew up. Nowhere could that be more true than in the life of a geologist born in the center of Wyoming and raised on an isolated ranch. This is the story of that ranch, soon after the turn of the century, and of the geologist who grew up there, at home with the composition of the high country in the way that someone growing up in a coastal harbor would be at home with the vagaries of the sea.

Rising from the Plains is McPhee's third book on geology and geologists. Following Basin and Range and In Suspect Terrain, it continues to present a cross section of North America along the fortieth parallel—a series gathering under the overall title Annals of the Former World.

"McPhee rides shotgun across Wyoming in a four-wheel-drive Bronco while the geologist David Love steers, lectures, and reminisces . . . This instructive account of the geologic West and the frontier West is a delight."—Evan S. Connell, The New York Times Book Review

"Mr. McPhee has created a style—blending detailed reporting with a novelistic sense of narrative—and a standard that have influenced a whole generation of journalists."—Timothy Bay, The Baltimore Sun

"McPhee offers a striking picture of the Rawlins Uplift, the stratified protrusion that rises from the Plains providing a rare chance to 'see' and sense 260 million years of layering, from the Archean eon to the Miocene . . . Much of the book is given over to descriptions of the Rocky ranges, their form and formation, and to comparisons with other geologically interesting areas. In a style that is uniquely McPhee, readers get to know the landscapes as they get to know those who study them: intimately. This makes it a very personal book."—Peter I. Rose, The Christian Science Monitor (Eastern edition)

"Although it stands well on its own, this book can be viewed as a continuation of McPhee's Basin and Range and In Suspect Terrain. As in those earlier works, the central theme of this book is the geology of an area near Interstate 80, this time the Rocky Mountains and adjacent terrain in Wyoming. McPhee skillfully weaves together the personal history of Rocky Mountain geologist David Love and his family with the geological history of the region, chronicling both the story of pioneering homesteaders and that of ancient seas, volcanoes, and episodes of mountain building. He also details the search for resources and the environmental effect of their discovery, as well as the inner workings of geology."—Joseph Hannibal, Library Journal

Rising From The Plains

This is about high-country geology and a Rocky Mountain regional geologist. I raise that semaphore here at the start so no one will feel misled by an opening passage in which a slim young woman who is...

John McPhee was born in Princeton, New Jersey, and was educated at Princeton University and Cambridge University. His writing career began at Time magazine and led to his long association with The New Yorker, where he has been a staff writer since 1965. Also in 1965, he published his first book, A Sense of Where You Are, with Farrar, Straus and Giroux, and in the years since, he has written nearly 30 books, including Oranges (1967), Coming into the Country (1977), The Control of Nature (1989), The Founding Fish (2002), Uncommon Carriers (2007), and Silk Parachute (2011). Encounters with the Archdruid (1972) and The Curve of Binding Energy (1974) were nominated for National Book Awards in the category of science. McPhee received the Award in Literature from the Academy of Arts and Letters in 1977. In 1999, he was awarded the Pulitzer Prize for Annals of the Former World. He lives in Princeton, New Jersey.