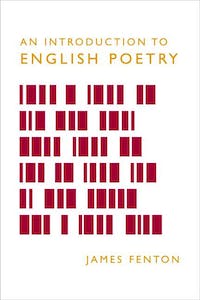 From one of contemporary literature's leading poet/critics comes an erudite and readable primer on poetry written in English. As far-reaching as it is engrossing, as savvy as it is concise, An Introduction to English Poetry examines poems from throughout the English-speaking world—and from all across the tableaux of prosody and history.

But what is English poetry? James Fenton argues that it includes any recited words in English that marshall rhythm for their meaning—among them prisoners's work songs, Broadway show tunes, and the cries of street vendors captured in verse. From these beginnings, Fenton describes the rudiments of—and, most important, the inspiration for—the musical verse we find in books, and concludes with an illuminating discussion of operas and songs.

Universal in his taste, shrewd in his distinctions, and charmingly frank, Fenton is the ideal guide to the development and variety of our verse. In all his writing, prose or poetry, Fenton has always had the virtue of saying, in a way that seems effortless, precisely what lies at the heart of the matter. In this vein, An Introduction to English Poetry is one of his highest accomplishments.

"I wish this book had existed when I was sixteen. I'd have been spared a great deal of fossicking in second-hand bookshops after dusty, dreadful treatises on metrics. It is hard to imagine a beginner who could not learn from it: indeed, I can think of a number of published adults whom it would greatly benefit."—Lachlan MacKinnon, Times Literary Supplement

"I have read a book that has gone a long way toward dispelling decades of misery and murk, just a little book, but so clearly written, and generous and simple, that after only a few pages I squeezed it hard and gave it a big kiss. It is An Introduction to English Poetry by James Fenton . . . Fenton does not explain why English poetry works as it does, but how it does—and eloquently, that it does . . . I have never come across a book quite like this one: so unfraught, so uncontentious, so lucid and gentlemanly. I cannot imagine that even the most wised-up spouter of poetry would not find it irresistible."—Katherine A. Powers, The Boston Globe

"Frank, witty, and even memorably acerbic . . . Other short introductions to poetic form contain nothing like the final two chapters, one on song, one on poetic drama and opera, which are the most original and suggestive in the book."—Virginia Quarterly Review

"Brilliant . . . In part [this book is] a rebuke to poets and critics who see a poem as a private transaction between the poet and the individual reader . . . Fenton's wit, terse eloquence, and sympathetic resonses to the poems [are] compelling and enriching."—Robert Hanks, The Daily Telegraph

"Presumably, if you're interested in writing poetry, you're interested also in the nuts and bolts of poetic technique, and James Fenton's little book, An Introduction to English Poetry, is as handy a guide as you're likely to find. Readers and writers of poetry alike will find Fenton's discussion of lineation, variations within the line, rhyme, and stanzaic organization clear, succinct, and to the point. What makes the book especially useful is that Fenton, a former professor of poetry at Oxford, never deviates from common sense. In both the reading and writing of poetry, he notes, 'the handling of rhythm and form is instinctive rather than codified. We think of a line that sounds well, and only later try it out against a template . . . or we compose a stanza and then see how many such stanzas we can devise . . . to complete the poem. We feel our way forward.' Fenton neither prescribes nor proscribes. His preference, clearly, is for metrical composition, but he recognizes that free verse is better suited to the matter and manner of some poets . . . Moreover, while Fenton may object to the notion that modern poetry 'must do without rhyme or meter,' he doesn't think the alternative 'is a crash course in villanelles, sestinas, and other such fixed forms.' Fenton even has good things to say about rap, 'a style of improvised or semi-improvised rhyming verse' that seems 'part of a contest . . . an assertion of the rap artist's supremacy in his field. Boasting and insulting are two traditional poetic modes.'"—The Philadelphia Inquirer

"The poet and critic James Fenton's excellent little book on English poetry in almost all its periods and guises has the unusual merit of demystifying technical poetics—iambic pentameter, rhyme-schemes, such arcane forms as the sestina—without removing the mystery of poetry itself . . . The most sensible and entertaining discussion I know of a vexed and often tedious topic. With a supremely light hand Mr. Fenton gives shrewd and succinct accounts of all the important forms and modes of English verse, from its earliest beginnings to the present. His 22 rapid chapters cover the mechanics of poetry so expertly that the reader is left wanting more. Usually I quail and feel the onset of a mighty yawn when confronted with such topics as the sonnet or the villanelle, but Mr. Fenton breathes new life into the most moribund themes. Wit and insight, together with wide but unobtrusive learning, are everywhere apparent in these pages . . . Though he pounds no 'multicultural' drum, he manages to adduce examples from an enormous array of sources: not only Milton and Shakespeare, Chaucer and Tennyson, but blues lyrics, Broadway songs, field-chants, and verses by the Australian balladeer Banjo Patterson . . . Because Mr. Fenton is a poet, and a superb one, he writes about technical matters from the inside. He knows that most good poets do not set out by counting their trochees or charting a sestina but write out of an instinctual lyric impulse informed by long training and discipline; that the form arises irresistibly from some passionate engagement with the subject matter and then takes its distinctive shape in accord with the poet's own craft and skill and tact. Because of this profound guiding principle, Mr. Fenton's brief book, the shrewdest and most delightful introduction to poetry available, can be read and enjoyed in an hour but contains the lessons of a lifetime."—Eric Ormsby, The New York Sun

"Fenton is not only informative, he is commonsensical . . . On balance, what Fenton seems most intent upon is equipping readers (and listeners) with the minimum skills to truly enjoy poetry."—Chauncey Mabe, South Florida Sun-Sentinel

James Fenton was Professor of Poetry at Oxford from 1994 to 1999. His most recent works on gardening, A Garden from a Hundred Packets of Seed (FSG, 2002), of criticism, The Strength of Poetry, and of poetry, Out of Danger, are published by FSG.