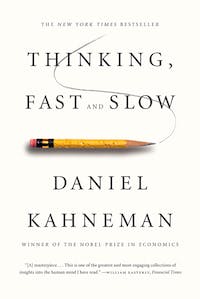 Daniel Kahneman, recipient of the Nobel Prize in Economic Sciences for his seminal work in psychology that challenged the rational model of judgment and decision making, is one of our most important thinkers. His ideas have had a profound and widely regarded impact on many fields—including economics, medicine, and politics—but until now, he has never brought together his many years of research and thinking in one book.

In the highly anticipated Thinking, Fast and Slow, Kahneman takes us on a groundbreaking tour of the mind and explains the two systems that drive the way we think. System 1 is fast, intuitive, and emotional; System 2 is slower, more deliberative, and more logical. Kahneman exposes the extraordinary capabilities—and also the faults and biases—of fast thinking, and reveals the pervasive influence of intuitive impressions on our thoughts and behavior. The impact of loss aversion and overconfidence on corporate strategies, the difficulties of predicting what will make us happy in the future, the challenges of properly framing risks at work and at home, the profound effect of cognitive biases on everything from playing the stock market to planning the next vacation—each of these can be understood only by knowing how the two systems work together to shape our judgments and decisions.

Engaging the reader in a lively conversation about how we think, Kahneman reveals where we can and cannot trust our intuitions and how we can tap into the benefits of slow thinking. He offers practical and enlightening insights into how choices are made in both our business and our personal lives—and how we can use different techniques to guard against the mental glitches that often get us into trouble. Thinking, Fast and Slow will transform the way you think about thinking.

"Daniel Kahneman is among the most influential psychologists in history and certainly the most important psychologist alive today. He has a gift for uncovering remarkable features of the human mind, many of which have become textbook classics and part of the conventional wisdom. His work has reshaped social psychology, cognitive science, the study of reason and of happiness, and behavioral economics, a field that he and his collaborator Amos Tversky helped to launch. The appearance of Thinking, Fast and Slow is a major event."—Steven Pinker, Harvard College Professor of Psychology, Harvard University, and author of How the Mind Works and The Better Angels of our Nature

"Daniel Kahneman is one of the most original and interesting thinkers of our time. There may be no other person on the planet who better understands how and why we make the choices we make. In this absolutely amazing book, he shares a lifetime's worth of wisdom presented in a manner that is simple and engaging, but nonetheless stunningly profound. This book is a must read for anyone with a curious mind."—Steven D. Levitt, William B. Ogden Distinguished Service Professor of Economics at the University of Chicago; co-author of Freakonomics and SuperFreakonomics

"Thinking, Fast and Slow is a masterpiece—a brilliant and engaging intellectual saga by one of the greatest psychologists and deepest thinkers of our time. Kahneman should be parking a Pulitzer next to his Nobel Prize."—Daniel Gilbert, Harvard University Professor of Psychology, author of Stumbling on Happiness, host of the award-winning PBS television series "This Emotional Life"

"This book is a tour de force by an intellectual giant; it is readable, wise, and deep. Buy it fast. Read it slowly and repeatedly. It will change the way you think, on the job, about the world, and in your own life."—Richard Thaler, University of Chicago Professor of Economics and co-author of Nudge

"The book is thorough, clearly written, and easily understood . . . [Kahneman] shows how there are not only rational aspects to decision making, but other human features as well . . . His challenge to economic orthodoxy is that the situation in which the decision maker finds himself does matter, as well as how he feels about it, whether the issue involves a gain or a loss, how a question is presented, what it is compared to, and other characteristics of the issue's formulation . . . There are essentially two modes of thinking, one rapid and more emotional . . . and another, slower, more difficult and more analytical. Both have value, but the payoff for managers is to know the difference, know where they fit, and become more aware of how and when to use them."—Sam Farry, Pepperdine University, Graziadio Business Review

"For anyone interested in economics, cognitive science, psychology, and, in short, human behavior, this is the book of the year. Before Malcolm Gladwell and Freakonomics, there was Daniel Kahneman who invented the field of behavior economics, won a Nobel . . . and now explains how we think and make choices. Here's an easy choice: read this."—The Daily Beast

"This book is one of the few that must be counted as mandatory reading for anyone interested in the Internet, even though it doesn't claim to be about that. Before computer networking got cheap and ubiquitous, the sheer inefficiency of communication dampened the effects of the quirks of human psychology on macro scale events. No more. We must now confront how we really are in order to make sense of our world and not screw it up. Daniel Kahneman has discovered a path to make it possible."—Jaron Lanier, author of You Are Not a Gadget
"This is a landmark book in social thought, in the same league as The Wealth of Nations by Adam Smith and The Interpretation of Dreams by Sigmund Freud."—Nassim Taleb, author of The Black Swan
"The mind is a hilariously muddled compromise between incompatible modes of thought in this fascinating treatise by a giant in the field of decision research. Nobel-winning psychologist Kahneman posits a brain governed by two clashing decision-making processes. The largely unconscious System 1, he contends, makes intuitive snap judgments based on emotion, memory, and hard-wired rules of thumb; the painfully conscious System 2 laboriously checks the facts and does the math, but is so 'lazy' and distractible that it usually defers to System 1. Kahneman uses this scheme to frame a scintillating discussion of his findings in cognitive psychology and behavioral economics, and of the ingenious experiments that tease out the irrational, self-contradictory logics that underlie our choices. We learn why we mistake statistical noise for coherent patterns; why the stock-picking of well-paid investment advisers and the prognostications of pundits are worthless; why businessmen tend to be both absurdly overconfident and unwisely risk-averse; and why memory affects decision making in counterintuitive ways. Kahneman's primer adds to recent challenges to economic orthodoxies about rational actors and efficient markets; more than that, it's a lucid, marvelously readable guide to spotting—-and correcting—our biased misunderstandings of the world."—Publishers Weekly (starred review)

Every author, I suppose, has in mind a setting in which readers of his or her work could benefit from having read it. Mine is the proverbial office water-cooler, where opinions...

The science of instinct versus logic

Daniel Kahneman on CBS This Morning with Charlie Rose and Gayle King.

Daniel Kahneman is Eugene Higgins Professor of Psychology Emeritus at Princeton University and a professor of public affairs at the Woodrow Wilson School of Public and International Affairs. He received the 2002 Nobel Prize in Economic Sciences for his pioneering work with Amos Tversky on decision-making. In 2013, Kahneman received the Presidential Medal of Freedom. He is the author of the international bestseller Thinking, Fast and Slow.