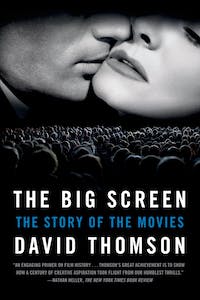 The Big Screen tells the enthralling story of the movies: their rise and spread, their remarkable influence over us, and the technology that made the screen—smaller now, but ever more ubiquitous—as important as the images it carries.
The Big Screen is not another history of the movies. Rather, it is a wide-ranging narrative about the movies and their signal role in modern life. At first, film was a waking dream, the gift of appearance delivered for a nickel to huddled masses sitting in the dark. But soon, and abruptly, movies began transforming our societies and our perceptions of the world. The celebrated film authority David Thomson takes us around the globe, through time, and across many media—moving from Eadweard Muybridge to Steve Jobs, from Sunrise to I Love Lucy, from John Wayne to George Clooney, from television commercials to streaming video—to tell the complex, gripping, paradoxical story of the movies. He tracks the ways we were initially enchanted by movies as imitations of life—the stories, the stars, the look—and how we allowed them to show us how to live. At the same time, movies, offering a seductive escape from everyday reality and its responsibilities, have made it possible for us to evade life altogether. The entranced audience has become a model for powerless and anxiety-ridden citizens trying to pursue happiness and dodge terror by sitting quietly in a dark room.
Does the big screen take us out into the world, or merely mesmerize us? That is Thomson's question in this grand adventure of a book. Books about the movies are often aimed at film buffs, but this passionate and provocative feat of storytelling is vital to anyone trying to make sense of the age of screens—the age that, more than ever, we are living in.

"[Thomson's] book works both as an engaging primer on film history and as a map for more numinous shifts in the path of popular art. Where many people see an industry now in decline, Thomson offers a nuanced portrait of a creative business always reaching toward, or away from, the mirage of its own public image."—Nathan Heller, The New York Times Book Review

"[A] wily and wistful new history of cinema . . . The author re-illuminates cinematic landmarks with prose that would flatter the most lyrical of fiction writers . . . The Big Screen is as unfettered and full-frontal an expression of movie lust as film criticism gets."—Jan Stuart, San Francisco Chronicle

"A prodigious narrative history of cinema by the wise and authoritative critic David Thomson, this magisterial, occasionally daunting trove of knowledge, analysis and predictive pessimism has value not just as an indispensable reference but as a deep, absorbing drama of one man's lifelong affair with film . . . [Thomson's] book is as emotional as it is intellectual, as moving as it is illuminating. It doesn't take full agreement with Thomson's premises or conclusions to derive pleasure from the intellectual vigor and passion of his writing, not to mention the several overlooked masterworks he recommends along the way."—Anne Hornaday, The Washington Post

"In The Big Screen, British-American film critic and historian David Thomson attempts to answer some fundamental questions about the world's favorite hobby. How do we relate to the movies? 'The cinema is the embodiment of "let there be light,"' he writes. But where does the light come from? Does it illuminate us or blind us? Of course, these are difficult and possibly even unanswerable questions. But Thomson— arguably the world's most intelligent student of the cinema—proves remarkably up to the task. The Big Screen is beautiful and expansive."—Michael Schaub, NPR.org

"What David Thomson doesn't know about movies probably isn't worth knowing. But the latest project for the longtime film historian, author of numerous books including the essential Biographical Dictionary of Film, was daunting even for him. His new book. The Big Screen: The Story of the Movies, is no less than a sweeping history of movies, from the earliest experiments to up-to-the minute streaming video and TV; seasoned liberally with Thomson's often-salty opinions and delicious observations . . . A joy for movie buffs; you'll feel as if you're listening to a wise, witty friend who seems to have seen—and remembered—everything."—Moira Macdonald, The Seattle Times

"It's panoramic and obsessive and contains more interesting observations about Pretty Woman than you'd expect . . . I'm deep into it. It's a work of celebration that's suspicious of golden ages but shot through with a profound sense of loss, Thomson's thinking about the movies' inadvertent role in making us into who we are today, a whole culture constantly staring at various glowing rectangles."—Alex Pappademas, Grantland.com

"Thomson has a deft, conversational style across an amazing range of topics . . . fresh and insightful."—Clint O'Connor, The Plain Dealer (Cleveland)

"For those who take their films seriously, The Big Screen will have you both rethinking some mainstream ideas and reorganizing your Netflix queue."—Neal Justin, Star Tribune (Minneapolis)

"Erudite and entertaining . . . Thomson puts on a fine show . . . The author rummages around his head full of knowledge, pulls out colorful bits of movie history, and displays his stuff to the charmed reader."—Lisa Schwarzbaum, Entertainment Weekly

"One of the most knowledgeable, enjoyably idiosyncratic, and prolific writers on the movies jumps back and forth in time and across media (TV, YouTube, smartphones, the silver screen) in this insightful study of how movies shape our consciousness, collective and otherwise." —Steven Rea, The Philadelphia Inquirer

THE BIG SCREEN (A Cheap Form of Amusement)
In 1911, William de Mille heard that a promising Canadian stage actress lately seen in The Warrens of Virginia (1907) was making the mistake of her life. He told the impresario David Belasco,...

David Thomson, renowned as one of the great living authorities on the movies, is the author of The New Biographical Dictionary of Film, now in its fifth edition. His books include a biography of Nicole Kidman and The Whole Equation: A History of Hollywood. Thomson is also the author of the acclaimed "Have You Seen . . . ?": A Personal Introduction to 1,000 Films. Born in London in 1941, he now lives in San Francisco.