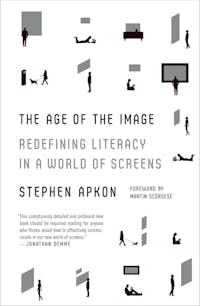 We live in a world that is awash in visual storytelling. The recent technological revolutions in video recording, editing, and distribution are more akin to the development of movable type than any other such revolution in the last five hundred years. And yet we are not popularly cognizant of or conversant with visual storytelling's grammar, the coded messages of its style, and the practical components of its production. We are largely, in a word, illiterate.

But this is not a gloomy diagnosis of the collapse of civilization; rather, it is a celebration of the progress we've made and an exhortation and a plan to seize the potential we're poised to enjoy. The rules that define effective visual storytelling-much like the rules that define written language-do in fact exist, and Stephen Apkon has experience in deploying them, teaching them, and witnessing their power in the classroom and beyond. In The Age of the Image, drawing on the history of literacy-from scroll to codex, scribes to printing presses, SMS to social media-on the science of how various forms of storytelling work on the human brain, and on the practical value of literacy in real-world situations, Apkon convincingly argues that now is the time to transform the way we teach, create, and communicate so that we can all step forward together into a rich and stimulating future.

"Can there be anything more to say about the ascent of the image in our contemporary world? Yes! And Stephen Apkon has said it in his timely, acutely perceptive, and often impassioned book, which sets the rise of visual language in the context of the long history of communication. Anyone who wants to understand the play of word and and image in our present culture will want to read The Age of the Image."-Simon Schama, Professor of History and Art History, Columbia University

"By turns profound and practical, The Age of the Image can be a soulfully erudite companion to the technical manuals in film schools, or a handbook for audiences wanting to deepen their experience of media. Either way, readers and the new class of producers are invited to appreciate and better wield the power of visual expression."-Vanessa Finney, San Francisco Book Review

"On the page, Apkon comes across as a curious and generous spirit. To advocate for the literacy he believes our civilization needs, he's done some useful and rigorous research on how our brains process visual information. From cave paintings to YouTube ephemera, Apkon is a keen surveyor. His appreciations are succinctly academic, his wisdom warm and teacherly."-Jonathan Kiefer, San Francisco Chronicle

"At its humblest level, his book is about the 'language' of film, but Mr Apkon has a larger philosophical point, too. Our culture is growing more global. While it still relies on words, they are increasingly wrapped up with images, and it is the images people remember."-Christopher Caldwell, Financial Times

"Apkon's book is both extremely personal and pointedly instructional. It is a solid and basic college-level survey course between covers, with all manner of choice detours-interviews with YouTube's Freddie Wong, say, and Chris Anderson, 'curator of the visionary TED conferences' online explaining 'crowd-accented innovation,' the 'collective shaping of what we believe and read and watch [that] is going to be done more and more by nonprofessionals with a VISUAL message.'"-Jeff Simon, The Buffalo News

"The Age of the Image is nothing less than a twenty-first-century master class focused on the past, future, and current state of all things visual. Stephen Apkon is one of the leading visualists and educators of the day, and this sumptuously detailed and profound new book should be required reading for anyone who thinks about how to effectively communicate in our new world of screens."-Jonathan Demme, filmmaker, producer and screenwriter

"A passionate argument for formulating a new concept of literacy in our hypervisual times . . . Apkon offers a crisp summary of the evolving definition of literacy, from ancient French cave paintings to the modern film industry. He also provides an intriguing glimpse into cutting edge neuroscience, including a visit to a company using functional magnetic resonance imaging to measure the brain's response to visual stimuli."-Harvey Freedenberg, Shelf Awareness

ALL THE WORLD'S A SCREEN


We often look for signs of systemic change in the highest of places, yet it is often in the most profane of places that we find the fuel for this change.
So it seems appropriate that a look at the shape...

I AM HERE: A short film for The Age of the Image, by Stephen Apkon (foreword by Martin Scorsese)

In his new book The Age of the Image, Steve Apkon argues that it is time we understand why and how visual images are today's most powerful form of communication. This short film, created especially for the book, shows exactly how image, sound and story can be more effective than words alone.

Stephen Apkon is the founder and executive director of the Jacob Burns Film Center, a non-profit film and education organization located in Pleasantville, New York. The JBFC presents a wide array of documentary, independent, and foreign film programs in a three-theater state-of-the-art film complex, and has developed educational programs focused on twenty-first century literacy. Under Apkon's leadership, the JBFC opened a 27,000-square-foot media arts lab in 2009. Since its doors opened in 2001, JBFC education programs have reached more than 100,000 children.

Steve serves on the boards of The World Cinema Foundation and Advancing Human Rights. He is President of Big 20 Productions; the director and producer of The Patron, a collaboration with Ido Haar; a producer of Enlistment Days, directed by Ido Haar; and a producer of I'm Carolyn Parker: The Good, the Mad, and the Beautiful directed by Jonathan Demme.