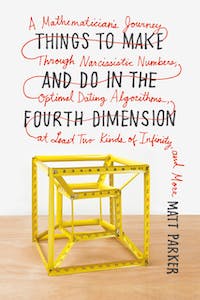 Math is boring, says the mathematician and comedian Matt Parker. Part of the problem may be the way the subject is taught, but it's also true that we all, to a greater or lesser extent, find math difficult and counterintuitive. This counterintuitiveness is actually part of the point, argues Parker: the extraordinary thing about math is that it allows us to access logic and ideas beyond what our brains can instinctively do—through its logical tools we are able to reach beyond our innate abilities and grasp more and more abstract concepts.

In the absorbing and exhilarating Things to Make and Do in the Fourth Dimension, Parker sets out to convince his readers to revisit the very math that put them off the subject as fourteen-year-olds. Starting with the foundations of math familiar from school (numbers, geometry, and algebra), he takes us on a grand tour, from four dimensional shapes, knot theory, the mysteries of prime numbers, optimization algorithms, and the math behind barcodes and iPhone screens to the different kinds of infinity—and slightly beyond.

Both playful and sophisticated, Things to Make and Do in the Fourth Dimension is filled with captivating games and puzzles, a buffet of optional hands-on activities that entice us to take pleasure in mathematics at all levels. Parker invites us to relearn much of what baffled us in school and, this time, to be utterly enthralled by it.

"Parker, who is both a mathematician and a stand-up comedian, isn’t trying to convince you that math is useful, but that it’s fun. Parker’s commitment to wacky ideas and demonstrations really makes the book sparkle. For some people, it would be enough to know that you can build a computer out of dominoes. Parker actually does it . . . Along the way, he gives us a taste of the passion, and sometimes obsession, mathematicians have for their work . . . The book starts small with integers and the many ways to represent them. Anyone who can count can get on the train at this station, and the rest of the trip is at a friendly pace with plenty of time to take in the landscape of anecdotes, party tricks, and stories of what life might be like for 'hyperthetical' beings who live in four dimensions. If you already like math, Parker will probably give you some fun new nuggets to haul out at parties. If you're a bit hesitant around math, Parker has enough enthusiasm for both of you, and it is contagious."—Evelyn Lamb, Scientific American

“This is the best book on recreational mathematics since Martin Gardner's My Best Mathematical and Logic Puzzles.”—Library Journal

Have a look around you and find a drinking vessel, like a pint glass or a coffee mug. Despite appearances, almost certainly the distance around the glass will be greater than its height....

Matt Parker is a stand-up comedian and mathematician. He writes about math for The Guardian, has a math column in The Telegraph, is a regular panelist on BBC Radio 4's The Infinite Monkey Cage, has appeared in and worked on World's Top 5 on the Discovery Channel, and has performed his math stand-up routines in front of audiences of thousands.

Read more by Matt in The Guardian