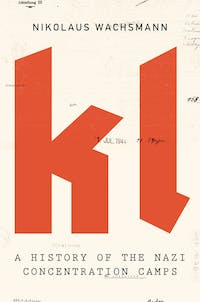 In a landmark work of history, Nikolaus Wachsmann offers an unprecedented, integrated account of the Nazi concentration camps from their inception in 1933 through their demise, seventy years ago, in the spring of 1945. The Third Reich has been studied in more depth than virtually any other period in history, and yet until now there has been no history of the camp system that tells the full story of its broad development and the everyday experiences of its inhabitants, both perpetrators and victims, and all those living in what Primo Levi called "the gray zone."

In KL, Wachsmann fills this glaring gap in our understanding. He not only synthesizes a new generation of scholarly work, much of it untranslated and unknown outside of Germany, but also presents startling revelations, based on many years of archival research, about the functioning and scope of the camp system. Examining, close up, life and death inside the camps, and adopting a wider lens to show how the camp system was shaped by changing political, legal, social, economic, and military forces, Wachsmann produces a unified picture of the Nazi regime and its camps that we have never seen before.

A boldly ambitious work of deep importance, KL is destined to be a classic in the history of the twentieth century.

“KL is a definitive history . . . Mr. Wachsmann's most impressive achievement in this synthetic work is his portraits of individual human beings. It takes hard effort to assemble enough sources on inmates or SS men to sustain them as characters in a book of this length. The prisoners had a range of references to describe their ordeals, from the Book of Exodus through Dante's Inferno. In the generations since, their experience has become one of our points of reference in moral discussions, and it is all the more gratifying to see the camp inmates portrayed here with unvarnished humanity. Mr. Wachsmann has in effect united the best of the German and the British schools of grand World War II history: hugely but humbly exhaustive research with attention to character and to detailed narrative.”—Timothy Snyder, The Wall Street Journal

“This is history writing of the highest order, and KL is surely one of the outstanding books written on the Third Reich in the past decade. Its author, Nikolaus Wachsmann, a professor of history at Birkbeck College, London, succeeds brilliantly in telling us much we did not know about what might seem like one of the most familiar phenomena of the Third Reich . . . What we have lacked all this time is a synoptic analysis of the development and character of the entire Nazi camp system. Now we have it and it will not need to be done again. In fact, anyone seriously interested in the Third Reich should read this book.”—Mark Mazower,Financial Times

“[A] superb book . . . essential, profoundly sobering . . . It is difficult to imagine a more powerfully instructive telling of this painful story, and it will certainly be a long time before this masterly account is superseded.”—Janet Caplan, The Times Literary Supplement

“While Wachsmann holds himself to highest standards of scholarship, he is also a gifted author whose eye frequently falls on the telling or surprising detail, which makes KL not only an important work of history, but also, even at 865 pages in length, a rich and highly readable book, full of incident and irony.”—Jonathan Kirsch, Jewish Journal

“This book is a remarkable achievement. Nikolaus Wachsmann has written the first integrated history of Nazi concentration camps, unifying in a single narrative the policies and measures governing the inception and growth of the system, the context in which the monstrous KL developed and how each of its stages and facets was recorded and remembered by its victims. The study is essential for a further understanding of the Third Reich.”—Saul Friedlander, author of The Years of Extermination: Nazi Germany and the Jews, 1939-1945 (winner of the Pulitzer Prize)

“Nikolaus Wachsmann has written an admirable historical overview of the Nazi concentration camps, effectively combining decades of recent scholarship with his own original research. He captures both the trajectory of dynamic change through which the camp system evolved as well as the experiences and agency--however limited--of the prisoner community. This is an impressive and valuable book.”—Christopher R. Browning, author of Ordinary Men: Reserve Police Battalion 101 and the Final Solution in Poland

“It is hard to imagine that Nikolaus Wachsmann's superb book, surely to become the standard work on Nazi concentration camps, will ever be surpassed. Based on a huge array of widely scattered sources, it is a gripping as well as comprehensive and authoritative study of this grim but highly important topic.”—Sir Ian Kershaw, author of The End: The Defiance and Destruction of Hitler's Germany, 1944–1945

“This is the fullest and most comprehensive history of the Nazi concentration camps in any language: a magnificent feat of research, full of arresting detail and cogent analysis, readable as well as authoritative: an extraordinary achievement that will immediately take its place as the standard work on the subject.”—Sir Richard J Evans, author of The Third Reich at War

“[I]f a bookshelf has room for only one history of the Holocaust, this is a strong contender for that space.”—Stephanie Shapiro, The Buffalo News

“[A] comprehensive and ground-clearing work of research and a wrenching work of narrative. It's gruesome reading, but you're in masterful hands the entire time.”—Steve Donoghue, Open Letters Monthly

“Nikolaus Wachsmann . . . delivers a comprehensive history of an unendurable subject . . . [He] has absorbed an enormous amount of recent research on the KL. From this mountain of material he has crafted a fluent and gripping history.”—David Mikics, Tablet Magazine

“Wachsmann's meticulously detailed history is essential for many reasons, not the least of which is his careful documentation of Nazi Germany's descent from greater to even greater madness. To the persistent question, 'How did it happen?,' Wachsmann supplies voluminous answers.”—Earl Pike, Cleveland Plain Dealer

“A harrowing, thorough study of the Nazi camps . . . A comprehensive, encyclopedic work that should be included in the collections of libraries, schools and other institutions.”—Kirkus Reviews (starred review)

"So you want to hang yourself?" SS Private Steinbrenner asked as he entered Hans Beimler's cell in Dachau on the afternoon of May 8, 1933. The tall Steinbrenner looked down on the haggard prisoner...

Nikolaus Wachsmann is a professor of modern European history at Birkbeck College, University of London. He is the author of the prizewinning Hitler's Prisons and a coeditor of Concentration Camps in Nazi Germany: The New Histories.