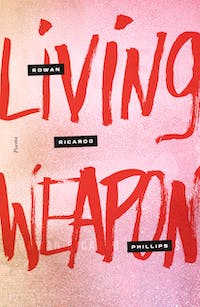 . . . and we’d do this again
And again and again, without ever
Knowing we were the weapon ourselves,
Stronger than steel, story, and hydrogen.
— from "Even Homer Nods"

A revelation, a shoring up, a transposition: Rowan Ricardo Phillips’s Living Weapon is a love song to the imagination, a new blade of light honed in on our political moment. A winged man plummets from the troposphere; four NYPD officers enter a cellphone store; concrete sidewalks hang overhead. Here, in his third collection of poems, Phillips offers us ruminations on violins and violence, on hatred, on turning forty-three, even on the end of existence itself. Living Weapon reveals to us the limitations of our vocabulary, that our platitudes are not enough for the brutal times in which we find ourselves. But still, our lives go on, and these are poems of survival as much as they are an indictment. Couched in language both wry and ample, Living Weapon is a piercing addition from a “virtuoso poetic voice” (Granta).

"Over and again, Phillips strives—within his own poems—to chip away at an explicit definition of what exactly we mean when we say 'poetry' . . . Throughout the collection, Rowan Ricardo Phillips refuses to abandon the past; instead, he interrogates its ghosts—in all their terrible admixture of violence and beauty—and, despite every reason not to, he sings."—Will Brewbaker, Los Angeles Review of Books

"Phillips’s determination to push beyond irony into affirmation is an audacious gesture—'resilient as bioluminescence,' these poems of 'song and pain' announce a bold new talent."—David Wheatley, The Guardian

"The truths of Phillips’s book are plain and perceptive, harsh and oddly soothing."—Nick Ripatrazone, The Millions

"In his dazzling third collection, Phillips (Heaven) explores social ills while celebrating poetry’s ability to provide solace and sense during times of upheaval . . . Phillips’s latest is lyrical, imaginative, and steeped in a keen understanding of current events."—Publishers Weekly (starred review)

Rowan Ricardo Phillips is the author of the books of poems Heaven (FSG, 2015) and The Ground (FSG, 2012), as well as the essay collections The Circuit and When Blackness Rhymes with Blackness. His many awards include a Whiting Writers’ Award, the PEN/Osterweil Award, the Anisfield-Wolf Book Award, the PEN/ESPN Award for Literary Sports Writing, and the Nicolás Guillén Outstanding Book Award. He lives in New York City and Barcelona.