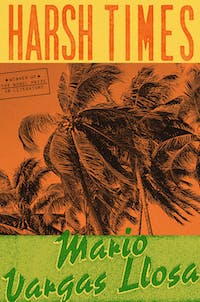 Guatemala, 1954. The military coup perpetrated by Carlos Castillo Armas and supported by the CIA topples the government of Jacobo Árbenz. Behind this violent act is a lie passed off as truth, which forever changes the development of Latin America: the accusation by the Eisenhower administration that Árbenz encouraged the spread of Soviet Communism in the Americas. Harsh Times is a story of international conspiracies and conflicting interests in the time of the Cold War, the echoes of which are still felt today.

In this thrilling novel, Mario Vargas Llosa fuses reality with two fictions: that of the narrator, who freely re-creates characters and situations, and the one designed by those who would control the politics and the economy of a continent by manipulating its history.

Harsh Times is a revealing novel that directly confronts recent history. No one is better suited to tell this story than Vargas Llosa, and there is no form better for it than his deeply textured fiction. Not since The Feast of the Goat, his classic novel of the downfall of Trujillo’s regime in the Dominican Republic, has Vargas Llosa combined politics, characters, and suspense so unforgettably.

"Harsh Times, which covers the same years as The Feast of the Goat, is not so much a sequel to the earlier book as an expansion of it, the new novel interwoven with the previous one, filling in gaps and deepening our understanding . . . Vargas Llosa has constructed a compelling and propulsive literary thriller, deeply informed by his experience as a public intellectual and a practicing politician."—Hari Kunzru, The New York Times Book Review

"As always with Vargas Llosa . . . the political is rendered personal through a cast of vivid, grotesque characters and through a narrative structure that is as complex and labyrinthine as the world it describes . . . It’s not just the subject matter that thrills, though; this is a novel that impresses at sentence level, too . . . [A] wildly enjoyable book; the 85-year-old Vargas Llosa is as sharp and mordantly funny as ever."—Alex Preston, Financial Times

"From Paul Revere’s ride to the storming of the Bastille to last year’s Black Lives Matter protests, the spirit of revolution has stirred the hearts of those yearning for justice—and yet freedom never comes for free, as the Nobel laureate wrenchingly observes in his intricately plotted new novel . . . Harsh Times explores evergreen themes—skirmishes between the powerful and powerless, how war erodes our humanity—with gallows humor."—Hamilton Cain, Oprah Daily

"[A] vivid story centered on the U.S.-backed 1954 coup in Guatemala . . . History here gets a compelling human face through an artist’s dramatic brilliance.”—Kirkus Reviews (Starred Review)

"Classic Vargas Llosa . . . An unsettling reminder of the complicated relationship between storytelling and politics."—Booklist (Starred Review)


MISS GUATEMALA’S MOTHER came from a family of Italian immigrants named Parravicini. After two generations, the surname was shortened and Hispanicized. When the young jurist, law professor, and attorney Arturo Borrero Lamas...

Mario Vargas Llosa was awarded the Nobel Prize in Literature “for his cartography of structures of power and his trenchant images of the individual’s resistance, revolt, and defeat.” He has also won the Miguel de Cervantes Prize, the Spanish-speaking world’s most distinguished literary honor. His many works include Sabers and Utopias, The Discreet Hero, The Feast of the Goat, The Bad Girl, and Aunt Julia and the Scriptwriter, all published by Farrar, Straus and Giroux.

Adrian Nathan West is a novelist, an essayist, and a translator based in Spain. His work has appeared in many publications, including The New York Review of Books, The Times Literary Supplement, The London Review of Books, McSweeney’s, and more. He is the author of The Aesthetics of Degradation and a contributing editor at the translation journal Asymptote.