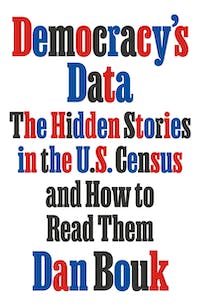 The census isn’t just a data-collection process; it’s a ritual, and a tool, of American democracy. Behind every neat grid of numbers is a collage of messy, human stories—you just have to know how to read them.

In Democracy’s Data, the data historian Dan Bouk examines the 1940 U.S. census, uncovering what those numbers both condense and cleverly abstract: a universe of meaning and uncertainty, of cultural negotiation and political struggle. He introduces us to the men and women employed as census takers, bringing us with them as they go door to door, recording the lives of their neighbors. He takes us into the makeshift halls of the Census Bureau, where hundreds of civil servants, not to mention machines, labored with pencil and paper to divide and conquer the nation’s data. And he uses these little points to paint bigger pictures, such as of the ruling hand of white supremacy, the place of queer people in straight systems, and the struggle of ordinary people to be seen by the state as they see themselves.

The 1940 census is a crucial entry in American history, a controversial dataset that enabled the creation of New Deal era social programs, but that also, with the advent of World War Two, would be weaponized against many of the citizens whom it was supposed to serve. In our age of quantification, Democracy’s Data not only teaches us how to read between the lines but gives us a new perspective on the relationship between representation, identity, and governance today.

"Solid storytelling chops and a friendly tone help Bouk convince readers who might question just how interesting a book about the census can be. Surprise—it can be! In the hands of someone who understands it, the census is a mirror of the country’s ideals, values, flaws and attributes . . . Bouk uncovers the great paradox about the decennial count: that it is an impossibly large and messy task, but also an awe-inspiring achievement . . . He wants us to believe that achieving a better census is possible, and to care whether it improves. Democracy’s Data makes the case."—Karen Sandstrom, The Washington Post

"A tour de force of archival research that reads like a detective story, Democracy's Data reveals an entire secret history behind one of the most underappreciated institutions of modern civic life: the census. Following Dan Bouk through this riveting exploration of what it means to count and be counted has forever changed my understanding of the relationship between information and a democratic society."—Steven Johnson, author of The Ghost Map and Extra Life

"The U.S. Census is one of the most important yet least understood parts of American democracy and Dan Bouk masterfully tells this story through rich characters, eye-popping data, and deep historical analysis. A must-read for students of history and politics."—Ari Berman, author of Give Us the Ballot: The Modern Struggle for Voting Rights in America

“Dan Bouk’s Democracy’s Data is a revelation of the political and cultural forces that led to the 1940 census, and of the philosophical questions that underlie all attempts to classify people. What do we measure? And who has the power to decide? Bouk tells us what is at stake: a battle for the very definition of personhood.”—Ellen Ullman, author of Close to the Machine

“In 1787, the framers of the Constitution decided that the new federal government would count the population every ten years and use the results to apportion seats in the U.S. House of Representatives and Electoral College. ‘We, the people,’ the constitution asserts in its preamble, are the foundation of the American state. One hundred and fifty years and sixteen censuses later, the 1940 census continued to fulfill that mandate. But it turned out that the census did so much more. Dan Bouk has written an extraordinary book revealing just how prescient the framers were.”—Margo Anderson, author of The American Census: A Social History

“With a gift for stories and an abundance of acutely probing questions, Dan Bouk shows how democracy’s data was produced. The politics of numbers has rarely been told so grippingly.”—Daniel T. Rodgers, author of Age of Fracture

“Who knew stories about government and statistics could be so engrossing? Through captivating storytelling, Dan Bouk makes an esoteric infrastructure utterly enthralling. Democracy’s Data takes you on an intimate journey, peeling back layers to help you see what lies behind the numbers.”—danah boyd, author of It’s Complicated and ethnographer of the 2020 U.S census

“A gifted storyteller, Dan Bouk reveals the political drama rumbling beneath a single census question and illuminates the stakes erupting from a solitary statistic. It turns out before there was Big Data there was old-fashioned big data, no less political and consequential eighty years ago than it is today. The humanity behind the numbers has always mattered, but Democracy’s Data transformed my black-and-white understanding into Technicolor! All who care about the plight of our democracy owe it to themselves to read this essential book.”—Ruha Benjamin, author of Race after Technology

"Page by page, Bouk polishes the seemingly dull census into a scintillating thing, gleaming with stories and sparkling with insight. Democracy's Data is a must-read for anyone who wants to know how data defines our democracy and our lives."—Jer Thorp, author of Living in Data

“Bouk shines a bright light on the power of the data to be used as a tool to promote or silence the voices of certain demographics . . . A page-turning examination of why we need to understand the census and its wide-ranging effects.”—Kirkus Reviews

"Fascinating . . . Genealogists, history lovers, and anyone interested in how government works will find this a fun and revealing history of how politics, racism, and bias affect the census.”—Booklist

Before any count could be made, before any households could be...

Dan Bouk researches the history of bureaucracies, quantification, and other modern things shrouded in cloaks of boringness. He studied computational mathematics as an undergraduate, before earning a PhD in history from Princeton University. His first book, How Our Days Became Numbered, explored the life insurance industry's methods for quantifying people, discriminating by race, and thinking statistically. He teaches history at Colgate University.