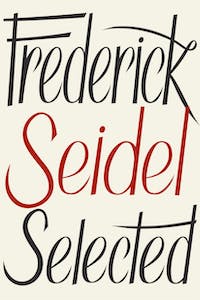 Frederick Seidel has been hailed as "the poet of a new contemporary form" (Dan Chiasson, The New York Review of Books) and "the most frightening American poet ever" (Calvin Bedient, Boston Review). The poems in Frederick Seidel Selected Poems span more than five decades and provide readers with some of Seidel's most powerful work.

Frederick Seidel is, in the words of the critic Adam Kirsch, "the best American poet writing today."

"Seidel is among the rare poets who’ve become noticeably better—nervier, more tricksy and electric—as they’ve slid into old age . . . He’s the Dark Prince of American poetry, a writer of glittering malice, one who cuts against the grain of almost every variety of community feeling. He’s not a poet for everyone, but no poet worth anything is . . . Meticulous and sublime."—Dwight Garner, The New York Times

"This selected, spanning half a century, demonstrates that Seidel’s renegade candor has only sharpened with age. With an erudite lexicon, staccato and ambling vignettes, and a frequently debonair tone, Seidel’s poems combine the sensibilities of the Greatest Generation and the Beats. They document a lust for life through a blunt and sensual dreamscape punctuated by labyrinthine conceits . . . This book offers a slice of Seidel’s life: the amorous, the dark, the indulgent, and the restless mind captured by a master of craft."—Publishers Weekly


A football spirals through the oyster glow

Of dawn dope and fog in L.A.’s

That punted it is absolutely stoned.

Frederick Seidel’s many books of poems include Peaches Goes It Alone, The Cosmos Trilogy, Ooga-Booga, Poems 1959–2009, Nice Weather, and Widening Income Inequality, all published by FSG.

Frederick Seidel at the New York Review of Books