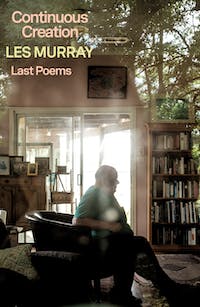 We bring nothing into this world
except our gradual ability
to create it, out of all that vanishes
and all that will outlast us.

In Continuous Creation, the final collection from Les Murray, the preeminent poet of modern Australia recalls moments from his youth and wryly observes the changing world, moving back and forth through time and history with characteristic curiosity and an ever-fresh commitment to capturing the rhythms of life in verse. This collection displays Murray’s miraculous ability to reinvent language in order to plant his and our reality on the page, whether he writes about the Australian landscape (“Kangaroo sleeping / ahead on the road turns out / to be twigs and leaves”) or unsold books sitting in department stores.

Continuous Creation demonstrates, once more, that Murray was one of the great poets of the English language. As Joseph Brodsky said, he was, “quite simply, the one by whom the language lives.”

"The poems in this posthumous collection are, as so often in his work, intelligent, high-spirited, coolly or crudely argued, full of small delights . . . I like best the poems smothered in the dust of the outback, poems taking that barren realm for granted as a Wordsworth would, making a home there of the private torments to which the past belongs . . . Few contemporary poets are as embedded in landscape . . . Murray was that rare thing, a poet who whatever his debts seemed an original. In the end he had nothing left to prove."—William Logan, The New York Times Book Review

"This book’s first poem, 'The Inland Food Bowl,' traces the course of the Murray River, Australia’s longest. And like that river with which he shares a surname, his work will endure, an unmissable landmark."—Michael Autrey, Booklist

A gapped circle of colonies

each staring at the ocean

through a glass plaid of imports.

heartland once of steamboats and drawl,

Les Murray (1938–2019) was a widely acclaimed poet, recognized by the National Trust of Australia in 2012 as one of the nation’s “living treasures.” He received the 1996 T. S. Eliot Prize for Subhuman Redneck Poems and was awarded the Queen’s Gold Medal for Poetry in 1998. He served as literary editor of the Australian journal Quadrant from 1990 to 2018. His other books include Dog Fox Field, Translations from the Natural World, Fredy Neptune: A Novel in Verse, Learning Human: Selected Poems, Conscious and Verbal, Poems the Size of Photographs, and Waiting for the Past.