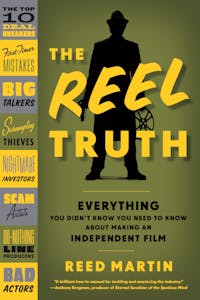 The Reel Truth details the pitfalls, snares, and roadblocks that aspiring filmmakers encounter. Reed Martin interviewed more than one hundred luminaries from the independent film world to discuss the near misses that almost derailed their first and second films and identify the close shaves that could have cut their careers short. Other books may tell you the best way to make your independent film or online short, but no other book describes so candidly how to spot and avoid such issues and obstacles as equipment problems, shooting-day snafus, postproduction myths, theatrical distribution deal breakers, and dozens of other commonly made missteps, including the top fifty mistakes every filmmaker makes.

From personal experience and his years as a freelance reporter covering independent film for USA Today and Filmmaker magazine, Martin uncovers the truth about the risks and potential rewards that go with chasing celluloid glory. Whether you're writing a screenplay, looking for financing, about to start shooting, or thinking about investing time and money (or someone else's money) in an independent film, The Reel Truth is an essential guide.

"New Yorker Reed Martin burned through $30,000 of his own money trying to make a short film and learned the hard way how difficult it is to steer even a modest project to successful completion . . . Chastened, Martin became curious about other filmmaker's horror stories. He interviewed Danny Boyle, Christine Vachon, Doung Liman, Barbara Kopple, Alexander Payne, Darren Aronofsky, and Werner Herzog along with dozens of indie film execs . . . Martin complied the nuggets of wisdom in his new book, The Reel Truth. Among a raft of legal, technical, interpersonal and financial obstacles detailed in the book, Martin says, 'the most egregious roadblock that filmmakers run into is the wrong producer, who can oftentimes be a charlatan with made-up productions credits' . . . Martin peppers Reel Truth's tales of woe with inspirational stories about tough-minded auteurs who refuse to give up."—Hugh Hart, San Francisco Chronicle

"Reed Martin's The Reel Truth is not only a terrific guide for aspiring filmmakers and a modern textbook for film school students everywhere. The advice and anecdotes in the chapters covering production, marketing, distribution, and online exhibition are useful for working filmmakers as well. For anyone hoping to make a successful independent film—especially in today's hyper-competitive environment—The Reel Truth is required reading." —Miguel Arteta, director, Youth in Revolt, and The Good Girl

"A brilliant how-to manual for tackling and mastering the industry."—Anthony Bregman, producer of Eternal Sunshine of the Spotless Mind

"The path to the premiere and beyond of any feature film is a minefield. With The Reel Truth, Reed Martin has given new filmmakers the battalion of bomb detectors necessary for survival."—Ted Hope, producer of The Ice Storm

"Reed Martin has created a smart, engaging read that is also one of the most comprehensive and cutting-edge looks at the changing face of independent-film production and distribution today. This is the one book I would call essential for anyone who really wants to make a career out of filmmaking."—Drew McWeeny, aka Moriarty, Ain't It Cool News

"Reed has written a guidebook essential for any aspiring filmmaker."—Tom Ortenberg, President of Theatrical Films, The Weinstein Company

"The most up-to-date guide readers could want . . . No one who embarks on a feature of his or her own after reading The Reel Truth can say he or she has not been warned—and, more important, not been prepared."—Jim Hemphill, American Cinematographer Magazine

"A must-have manual of knowledge and entertainment for beginning and experienced filmmakers . . . To not have this information is like scuba diving by yourself, skydiving without packing your own parachute . . . why risk it?"—Chris Eyre, director of Smoke Signals

"Martin, an entertainment reporter and former marketing executive, is well aware of the complexities and contradictions inherent in the minefield of independent filmmaking, and his book provides the most-up-to-date guide readers could want. With its combination of detailed legal, aesthetic and technical advice, supplemented by quotes from indie film luminaries (including Alexander Payne, Danny Boyle and many others), The Reel Truth is similar in both scope and quality to Gregory Goodell's excellent Independent Feature Film Production. Yet even readers who already own Goodell's book will find plenty of new material in Martin's tome, which addresses financing and production in a world of distribution options both shrinking (the theatrical market) and expanding (the Internet and various sell-through services on Amazon, Movielink, etc.). They will also find perhaps the most brutally realistic of the many independent filmmaking manuals on the market—using dozens of examples of actual films and their abilities (or lack thereof) to recoup their investment, Martin provides sound, pragmatic advice for the many thousands of low-budget filmmakers who debut film will most likely not be the next Open Water or Blair Witch Project . . . He provides an abundance of useful tips for independent filmmakers, particularly when it comes to deciding where to be cheap and where to spend money. As Martin and his interviewees point out, there are a lot of areas where pinching pennies just does not make sense, and those areas are not always the things beginning filmmakers consider. The Reel Truth's greatest value lies in its attention to the less sexy aspects of movie production, things like security, parking, gas and insurance. Yet Martin also offers many nifty aesthetic tricks one can use to improve a film without spending extra cash, and his technical tips are remarkably specific; he addresses many issues most independent filmmakers learn about the hard way (like how to avoid time-code breaks when shooting on DV or hi-def), and he helpfully navigates the differences between various DV, HDV and hi-def cameras and formats. This specificity is the book's greatest strength, and the thing that distinguishes it from many others like it; Martin never speaks in generalities; instead, he offers precise monetary figures and technical specifications applicable to whatever topic he is discussing. The upshot of this is a forceful reaffirmation of the author's 'best of times, worst of times' thesis: his book is alternately sobering and inspiring as it forces the reader to acknowledge the cold, hard realities of independent filmmaking. It is safe to say that no one who embarks on a feature of his or her own after reading The Reel Truth can say he or she has not been warned—and, more important, not been prepared."—Jim Hemphill, American Cinematographer

"Martin covers everything from raising money to distribution, while including invaluable details such as the average cost of a soundtrack song (about $15,000, but $500,000 if it's the Rolling Stones) or the price of renting a New York City theater for a one-week run ($10,000–$50,000). Using current examples like the trial and tribulations of Sideways director Alexander Payne or the financing behind Swingers, Martin dispenses practical advice culled from real-life indie hits and misses that is both inspiring and cautionary. For certain technical information (sample budget breakdowns and representation contracts), Martin includes a solid appendix in what is ultimately an informative and very entertaining account of the indie film for would-be independent filmmakers and producers."—Publishers Weekly

Reed Martin has taught film finance and marketing at a variety of institutions, including NYU's Stern School of Business and Columbia Business School, and is the former director of marketing at Cary Woods's Independent Pictures.