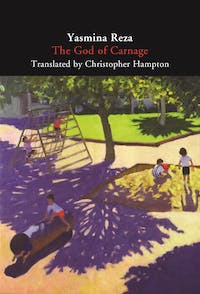 What happens when two sets of parents meet up to deal with the unruly behavior of their children? A calm and rational debate between grown-ups about the need to teach kids how to behave properly? Or a hysterical night of name-calling, tantrums, and tears before bedtime?

Christopher Hampton's translation of Yasmina Reza's sharp-edged new play The God of Carnage premiered at Wyndham's Theatre, London, in March 2008 and at Bernard B. Jacobs Theater, New York City, in March 2009. The International Herald Tribune calls it "an expert piece of stagecraft, and savagely funny."

"Reza holds the mirror up to bourgeois hypocrisy with the savage indignation of a born satirist."—The Guardian (UK)

Yasmina Reza is a French playwright and novelist whose works have all been multi-award-winning, critical, and popular international successes. Her plays Conversations After a Burial, The Passage of Winter, ‘Art', The Unexpected Man, Life x 3, and A Spanish Play have been produced worldwide and translated into thirty-five languages. L'aube le soir ou la nuit (Dawn Dusk or Night), her memoir about a year with Nicolas Sarkozy, was an enormous success in France and was released in the United States last year.

Christopher Hampton's work for the theater and cinema includes The Philanthropist, Savages, Tales from Hollywood, translations from Ibsen, Moliere, and Chekhov, and the screenplays Dangerous Liaisons, The Quiet American, and Atonement.