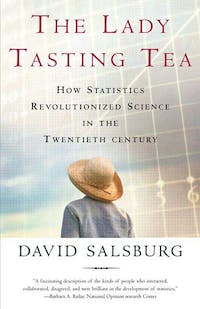 At a summer tea party in Cambridge, England, a lady states that tea poured into milk tastes differently than that of milk poured into tea. Her notion is shouted down by the scientific minds of the group. But one guest, by the name Ronald Aylmer Fisher, proposes to scientifically test the lady's hypothesis. There was no better person to conduct such a test, for Fisher had brought to the field of statistics an emphasis on controlling the methods for obtaining data and the importance of interpretation. He knew that how the data was gathered and applied was as important as the data themselves.

In The Lady Tasting Tea, readers will encounter not only Ronald Fisher's theories (and their repercussions), but the ideas of dozens of men and women whose revolutionary work affects our everyday lives. Salsburg traces the rise and fall of Karl Pearson's theories, explores W. Edwards Deming's statistical methods of quality control (which rebuilt postwar Japan's economy), and relates the story of Stella Cunliff's early work on the capacity of small beer casks at the Guinness brewing factory. The Lady Tasting Tea is not a book of dry facts and figures, but the history of great individuals who dared to look at the world in a new way.

"Salsburg's book is the story of statistical theory in the 20th century, its time of triumph, and of the mathematical/scientific geniuses who made it happen. He writes with both experience and insight, and with a happy lack of technical barriers between the reader and his subject. Particularly well told is the story of Ronald Fisher, the double genius who founded both mathematical statistics and mathematical genetics. If scientists were judged by their influence on science then Fisher would rank with Einstein and Pauling at the top of the modern ladder."—Brad Efron, Professor of Statistics, Stanford University

"A thoroughly delightful read . . . A charming collection of vignettes about those who created and sustained twentieth century statistics . . . woven together with the historical development of the statistics and in the context of the history of the times. Such characters as Cornfield, Deming, Lindeberg, Tukey, Wilcoxon, and Wilks are introduced as interesting personalities and contributors to their craft . . . The Lady Tasting Tea will stand as a terrific read for all whose interest in statistics extends beyond the equations and envelopes the personalities, the problems, and the paradigms in the century when it all began."—Chris Olsen, Journal of the American Statistical Association

"If you have ever been exposed to the statistical activities that permeate science, you will be fascinated by this book. Highly readable, well-written prose that avoids mathematical symbols and intricacies . . . Get the book for your own educational pleasure, or give it to someone you want to delight."—Alvan R. Feinstein, M.D., Sterling Professor of Medicine and Epidemiology, Yale University School of Medicine

"A host of fascinating stories . . . Mr. Salsburg has an encyclopedic command of the anecdotes about statisticians."—The Washington Times

"Thanks to Mr. Salsburg, readers delight in . . . the story of twentieth century science [that] unfolds, smoothly as a cup of sweet, milky tea."—The Dallas Morning News

"A fascinating description of the kinds of people who interacted, collaborated, disagreed, and were brilliant in the development of statistics."—Barbara A. Bailar, Senior Vice-President, National Opinion Research Center

"Salsburg . . . creates an important, near-complete chapter in the social history of science."—Publisher's Weekly

"Entertaining . . . The pleasures of the book emerge easily . . . and the end result is both educational and fun."—Nature Medicine

"The Lady Tasting Tea is a delightful introduction to the pioneers of 20th-century statistics . . . Salsburg describes the careers, contributions, and foibles of people whose names are common eponyms in biomedical articles: Pearson correlation coefficient, Fisher exact test, Student t test. The book is a popular history, not a scholarly treatise. The result is a lively succession of anecdotes filled with humor, academic rivalry, and adventure . . . To make the general reader comfortable, there are no mathematical symbols, formulae, or tables. Salsburg has concentrated on relating interesting stories. There are stories of statisticians who fled to Western Europe or the United States to escape poverty, fascism, or communism. The tales of success by women in the field are especially enjoyable. One of the best is about the lady in the book's title. At an afternoon tea in Cambridge in the late 1920s, she claimed that she could taste the difference between tea into which milk had been poured and tea that had been poured into milk. Ronald Aylmer Fisher, the statistician who invented the randomized controlled trial (in agricultural research) devised a randomized trial of the woman's contention on the spot. Fisher later related this experiment in a book but never gave the results of the taste tests; Salsburg reveals the answer. The book does a fine job of telling about the fierce rivalries between the giants of statistics in the early part of the century. Karl Pearson (who changed his first initial from C to K, in admiration of Karl Marx) was the dominant figure in the field when the 20th century began. The brilliant R. A. Fisher, an upstart from an agricultural research station, eventually overshadowed [Karl] Pearson and took pleasure in diminishing Pearson's accomplishments. In Fisher's later years, he devoted energy to attacking the work of Egon Pearson, the statistician who was Karl's son. The scope of the book includes statistics in economics and other areas. But Salsburg's own background is in the medical uses of statistics, and this is reflected in the book's content. Medical readers may especially enjoy the chapter about Fisher's attacks on the theory that smoking caused lung cancer. In addition to relating many short biographies, Salsburg covers several themes. He does a nice job of describing the growth of statistics as an academic discipline. He explains well how scientific thinking has been influenced by theories about measurement error. He makes the reader aware that there are important debates about the use and meaning of P values and hypothesis tests. In addition, the book gently introduces readers to many concepts, methods, and terms, for example, maximum likelihood and bootstrap methods. I recommend this book to physicians in training who would like to know about the people who invented the statistical methods that are now taught to medical students and research fellows. I recommend it to any reader who enjoys reading about the history of science."—Peter Cummings, MD, MPH, Journal of the American Medical Association

"This is an insightful and revealing history of how the emergence of statistics in scientific research revolutionized the sciences. Without using a single mathematical equation, Salsburg, a former Harvard professor and a prolific writer with three books and numerous articles on applied statistics, clearly discusses some major advances in statistics in the last century. He covers most of the major contributors to the field and dedicates two chapters to the contributions made by women. Salsburg also does an excellent job of showing how statistics has had an impact in the development of other sciences likes agriculture, cancer research, and econometrics as well as its influence in industry, where statistical methods are widely used in quality control and for the analysis of operational research. General readers with little mathematical background will be able to grasp Salsburg's lucid concepts with ease. Specialists will also enjoy reading this book for its interesting presentation and for the many biographical notations about some of the most influential researchers in the field."—Nestor L. Osorio, Northern Illinois University Library, DeKalb, IL, Library Journal

CHAPTER 1
THE LADY TASTING TEA
It was a summer afternoon in Cambridge, England, in the late 1920s. A group of university dons, their wives, and some guests were sitting around an outdoor table for...

David Salsburg is a former Senior Research Fellow at Pfizer, Inc., and currently works as a private consultant. He is a fellow of the American Statistical Association and received a lifetime achievement award from the Pharmaceutical Research and Manufacturing Association. The author of technical books and over fifty scientific articles, Salsburg has taught at Connecticut College, Harvard School of Public Health, Rhode Island College, Trinity College, the University of Connecticut, and the University of Pennsylvania. He lives in New London, Connecticut.