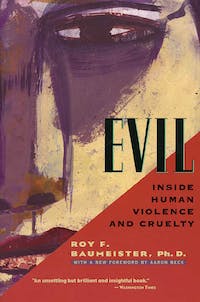 Why is there evil, and what can scientific research tell us about the origins and persistence of evil behavior? Considering evil from the unusual perspective of the perpetrator, Baumeister asks, How do ordinary people find themselves beating their wives? Murdering rival gang members? Torturing political prisoners? Betraying their colleagues to the secret police? Why do cycles of revenge so often escalate? Baumeister casts new light on these issues as he examines the gap between the victim's viewpoint and that of the perpetrator, and also the roots of evil behavior, from egotism and revenge to idealism and sadism.

"The question of why people hurt others is perhaps humanity's oldest and most urgent, long the subject of literature and religion. Can social science provide any answers? Social psychologist Baumeister assembles the available research, such as experiments on how people justify small transgressions and react to hypothetical situations, as well as close readings of accounts by murderers, rapists and torturers. He concludes that 'pure evil'—brutality inflicted on innocent victims for sadistic pleasure—is largely a myth. Most violence springs from the same sources as other human behavior: ambition, lust, fear, pride, idealism. It breaks out when self-control breaks down, often because of group pressures or a slow escalation from seemingly innocuous decisions. Most perpetrators do not enjoy their acts, at least at first, but feel they must be done. 'To understand evil,' Baumeister writes, 'we must set aside the comfortable belief that we would never do anything wrong. Instead, we must begin to ask ourselves, what would it take for me to do such things?' . . . A worthy synthesis."—Scientific American

"After twenty years of studying genocidal individuals and organizations, one conclusion has emerged for me as the most striking: the majority of people who commit mass murder seem perfectly normal . . . . I once met a man who commanded a squad that executed some 10,000 men, women, and children with axes and hoes. Today that man is a humble farmer. I have often wondered what he dreams. Baumeister helps us to see into the dreams of such perpetrators and, indeed, into our own darkest dreams."—Craig Etcheson, Ph.D., Manager, Cambodian Genocide Program, Yale University

"Blending material from history, literature, philosophy, and anthropology, Baumeister has skillfully presented a picture of the nature of the evil that people do, a picture often at odds with popular and mythological ones."—Russell G. Geen, Curators' Professor of Psychology, University of Missouri

"This is the most important work I have read on the nature of evil."—Brad J. Bushman, Assistant Professor of Psychology, Iowa State University

"Baumeister utilizes evidence from psychology, sociology, history, criminology, and anthropology; vivid and graphic case examples illustrate his points. He calls attention to the gap between the perpetrator's and the victim's viewpoints and urges a temporary suppression of moral judgment during the book, although he ends with a call to resume moral condemnation. Baumeister makes abundant use of case studies, newspaper stories, synthetic reviews of the literature, and his own research and observations."—Choice

"Baumeister has written an impressive book. He argues that most individuals become evil by degrees, crossing the divide between decent and unacceptable behaviour only gradually. He shows how the dynamics of small groups make it easier: young men, for example, join gangs and see all their peers behaving badly . . . Some of his most original points relate to self-esteem."—David Cohen, New Scientist

"Evidence from the disciplines of psychology, criminology, sociology, history and others is used to examine the roots of cruelty and violence, with historical and modern examples used to illustrate how modern people fall into patterns of violence. Recommended for a wide audience; from philosophers and college-level psychology courses to the general reader."—Midwest Book Review

"Baumeister, a professor of social psychology, examines evil beyond the many myths associated with it, rejecting the belief that certain people possess a 'pure evil' core. Instead, his survey of evil acts by people throughout history focuses more on the question of what stimuli or scenarios have led rather ordinary people to commit heinous crimes like the Holocaust. Baumeister concludes that most perpetrators do not see their actions as inherently bad and often see themselves as victims fighting for survival. Evil, he believes, is often the result of an incremental accumulation of pressures or rewards, and it is frequently connected with peer pressure, the need for acceptance, and losing one's identity to a group. Even rather idealistic people, he argues, can and will participate in the most horrible behaviors, completely believing in the right of what they're doing. A revealing and unflinching look at a subject usually ignored."—Brian McCombie, Booklist

"In this open-minded, provocative, unsettling inquiry into the causes of evil, Baumeister rejects the entrenched view that low self-esteem causes violence and aggression. On the contrary, he argues, violent or evil people tend to have highly favorable opinions of themselves, and cross the line to commit immoral, hurtful acts when they feel their egotism is threatened by others. Among the root causes of evil he identifies are ambition, desire for power or wealth, misplaced idealistic adherence to a creed or doctrine and sadistic pleasure. He applies this framework . . . to an analysis of diverse evils: murder, rape, street crime, war, petty cruelty, emotional abuse, wife beating, government repression, racial and ethnic hatreds. A social psychologist at Case Western Reserve University, Baumeister believes that evil grows and spreads when cultures stop restraining individuals' angry, violent impulses—a process abetted by desensitization, yearnings for revenge, group conformity and inadequate socialization or upbringing. His rewarding study challenges—and complements—traditional, religion-based views of evil with a humanistic perspective."—Publishers Weekly

Roy F. Baumeister, Ph.D., holds the E. B. Smith Professorship in Liberal Arts at Case Western Reserve University. Since receiving his doctorate in social psychology from Princeton University, he has received numerous fellowships and awards. He has published nearly 150 scientific works and is cited in numerous sources in the popular media. Baumeister has authored or co-authored a dozen other books, including Losing Control: How and Why Self-Regulation Fails and Meanings of Life. He lives on the shores of the Great Lakes.

Dr. Aaron T. Beck, M.D., the Father of Cognitive Therapy, is University Professor of Psychiatry at the University of Pennsylvania, and President of The Beck Institute for Cognitive Therapy. He is the author and co-author of a dozen books and over 350 articles and chapters.