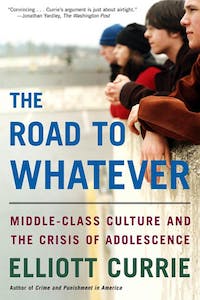 Sociologist and Pulitzer Prize finalist Elliott Currie investigates what has gone wrong for so many "mainstream" American adolescents. He rejects such predictable answers as TV violence, permissiveness, and inherent evil. Drawing on years of in-depth interviews with troubled adolescents, he links the crisis of today's youth to a pervasive "culture of exclusion" and neglect that has left young people with diminishing supports or options as they face the adult world. Currie describes a society in which severe punishment and "zero tolerance" of adolescent misbehavior have become the norm, where "tough love" has replaced engagement, and where medications may stand in for guidance. He explores the worrisome social changes—the strains on the family, the erosion of supportive communities—that have contributed to the growing vulnerability of the young. And he dissects the increasing rigidity of a competitive middle class that is quick to reject those who do not fit in, and enforces a sharp divide between winners and losers and narrower definitions of success.

In The Road to Whatever, Currie offers an empathetic look at America's troubled youth and a call for a healthier, more humane future for the next generation.

"'Whatever,' in the title of [Elliott Currie]'s disturbing study of disaffected American teenagers, refers to 'how they felt just before they did something dangerous or self-destructive—an emotional place in which they no longer cared very much about what happened to them and that made trouble not only possible but likely.' The common assumption for a number of years has been that this happens because the kids are 'bad,' because they've failed to assume responsibility for their lives, because they're natural-born troublemakers, because they're 'spoiled' and 'indulged.' Currie disagrees. He says their 'troubles mainly reflect their treatment by irresponsible, incompetent or resentful adults,' and his argument is just about airtight. In case upon case, Currie presents the testimony—in their own words, often profane and almost always vivid—of young people who grew up in white middle-class families in which even the most innocent mistakes met with 'punishment and rejection, which, in turn, plunged adolescents deeper into a sense of failure and alienation and confirmed their sense of themselves as flawed and unworthy people.'"—Jonathan Yardley, The Washington Post

"This book will worry you and make you think hard about the collapse of a caring environment in America. Drawing on the vivid firsthand accounts of adolescents themselves, Currie shows us how the harsh cultural and institutional environment even of the American mainstream leads to the punishing neglect of our children."—Frances Fox Piven, author of Regulating the Poor

"When the shootings at Columbine occurred, the offenders were demonized, and there was little acknowledgment that anything is amiss among white middle-class youth. But Currie notes that middle-class white youth are more likely to commit suicide and abuse drugs and alcohol than other teens. Putting these kids at risk are social and cultural forces, including Darwinian notions of 'tough love' and punishing youth who don't fit expectations for high achievement. Drawing on interviews with white middle-class youth either in the throes of a crisis or looking back on recovery, Currie offers harrowing portraits of teens who shot up heroin or speed, drank themselves senseless, were nearly killed in car accidents, or attempted to kill themselves more directly. Though each case is unique, two similarities stand out: none of the teens had a single issue or problem, and each family responded harshly. Currie also examines both the elements affecting individual kids and their backgrounds and the resources that eventually helped them to recover."—Vanessa Bush, Booklist

"Sociologist Currie sees the social climate in America as being shaped by a modern market ideology that views life as a competitive scramble in which individuals must sink or swim on their own. Adolescents today, he says, bear the marks of growing up in a world dominated by a lifeboat ethic that denies mutual responsibility and assistance to the vulnerable. From 2000 to 2002, the author conducted a study of adolescents in treatment for substance abuse; here, his recorded conversations with these youths, as well as with many of his college students, provide a vivid picture of adolescent troubles. From them, Currie identifies and examines in some detail four main themes: inversion of responsibility, intolerance of transgression, rejection of nurturance, and worth seen as contingent on meeting certain narrow standards of performance. In their own words, adolescents describe their encounters with these attitudes in families, schools, and other institutions. Parents are shown as quick to discipline but slow to take responsibility, to nurture and to support. Schools, Currie declares, are prone to categorize students as 'good' or 'bad' and to banish the bad. He charges that treatment programs, which often offer medication as the first form of intervention, favor such harsh therapeutic techniques as shaming and humiliation. From his interviews, he concludes that the help that mattered most to youth was practical assistance that did not try to change them but helped them make changes they had already chosen. Despite his assertion that the root of the problem is cultural, in his final chapter he does offer some specific steps for better meeting the needs of troubled adolescents. [Currie] tosses a daunting challenge to educators, social workers, and policy shapers."—Kirkus Reviews

"The author's arguments for supporting the emotional and educational development of our soon-to-be adults are well presented and persuasive."—Suzanne W. Wood, emerita, SUNY College of Technology at Alfred, Library Journal

"Popularly deemed a problem of the minority poor, adolescent crime is also an issue of the suburban middle class, argues sociologist Currie in his close look at disaffection and transgression among the teenage bourgeoisie. Drawing on numerous interviews with college students and a two-and-a-half-year study of adolescents in drug treatment programs, Currie argues that because 'we are accustomed to deploying the image of a stable and successful middle class as measuring stick against which the less . . . successful parts of our society . . . can be judged,' we demonize and/or fail to understand middle-class kids who go astray. One of Currie's subjects, who began using drugs at 13, reminisces about growing up in a 'beautiful home, really a beautiful home'—but financial comfort didn't prevent her from stealing from her family to buy drugs. In addition to the teens' detailed (and harrowing) personal accounts, Currie offers suggestions as to why teens from supposedly ideal homes are lured into irresponsible and criminal behavior. It's not our culture of permissiveness but our 'culture of contingent worth,' in which kids feel like they're never good enough; similarly, an intolerance for transgression and a 'totalizing moralism' labels kids as bad rather than acknowledging their mistakes. Surprising, insightful and potentially controversial, Currie's analysis adds further nuance to burgeoning critiques of adolescence in the U.S."—Publishers Weekly

Over and over, the kids I spoke to told me how they had hidden their troubles from adult authorities for years. The only people they talked to "for real," if anyone, were their friends, who were usually kids in the same boat-the ones on the outside,...

Elliott Currie is the author of Confronting Crime, Reckoning, and Crime and Punishment in America. An internationally recognized authority on youth and crime, he is a professor of criminology, law, and society at the University of California, Irvine.