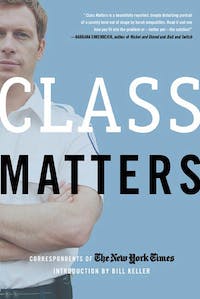 Collecting all fourteen articles in the highly-acclaimed New York Times narrative series, Class Matters produces numerous fresh and thought-provoking insights on an extremely complicated—and rarely discussed—subject. It demonstrates how social class in America plays a crucial role in all aspects of society, including education, health, marriage, and geography. The series profiles a range of individuals: a couple in cross-class marriage; a family who slipped into the welfare class and battled their way out; a Ph.D. student from a poor region in southwest Virginia; a group of Mexican restaurant workers; a "relocation" family—a term used to define the nomadic life of white-collar families in Georgia; and the migration of evangelical Christians from the social margins into the Protestant mainstream.

In his Introduction, Bill Keller, executive editor of The New York Times, fittingly states that the reporting represented in these articles—already considered core resources in many classrooms nationwide—"take the discussion of class in our country to a new level."

Class Matters also includes essays by Christopher Buckley, Richard Price, Linda Chavez, Diane McWhorter and David Levering Lewis about their encounters with class while they were growing up.

"It is gratifying to find that, obversely, many deadline-stressed journalists have within them a research scholar wishing to get out, one who carries out that sustained, academic research that is impossible under the pressure of daily assignments. The newly released book Class Matters is just such a journalist-led research effort, the culmination of an extraordinary decision by The New York Times to carry out a year-long research project on social class, based on a commissioned survey as well as much ethnographic legwork. The resulting book (14 chapters written by 13 reporters and editors) includes topics intended to demonstrate the complex and changing ways in which "class matters" for health, family relations, consumption and lifestyle, educational decisions, and much more. The authors often draw smartly on the survey commissioned for the project . . . It is . . . important that Class Matters puts the brute facts of inequality before us in a compelling, discomforting way. In a world where inequality is everywhere, we become necessarily inured to it, and Class Matters works admirably to make us see it again freshly and feel it again deeply. We all know that the world is massively unequal, but the force of the known is lost on us as we live with it on a daily basis. The horrific distributional decisions that we have collectively made come to be appreciated not a real decisions but as part of the natural order. The great achievement of Class Matters is that it thrusts these decisions before us and reminds us that they are just that. Does Class Matters outperform the standard scholarly journal article in this regard? Indisputably. Does there come a time when the exalted scientific method is beside the point and high-quality journalism is the order of the day? Absolutely. In this important sense, Class Matters is a resounding success, and the New York Times is to be commended for making it happen."—David B. Grucky, Contexts

"Class Matters aims to do what novelists like Dreiser and Fitzgerald and satirists like Veblen once did: to get us thinking about the ways in which money and social status influence who we are . . . Even before the tax cuts of 2001 and 2003 offered stupendous breaks to the very rich, the United States was already transforming itself into a society in which merit counts—and in which merit is determined by what your parents earned and where your grandparents came from. Back when Americans still had a sense of shame, we called such morally arbitrary advantages unfair, sometimes even unjust. Now we ignore them in favor of debates about gay marriage or stem cells. Class Matters seeks to change that and I, for one, hope it does. If its stories of unearned breaks and unwarranted misfortune do not make you blood boil, you probably left your social conscience on the ferry to Nantucket."—Alan Wolfe, The New York Times Book Review

"Class Matters is a beautifully reported, deeply disturbing portrait of a society bent out of shape by harsh inequalities. Read it and see how you fit into the problem or—better yet—the solution!"—Barbara Ehrenreich, author of Nickel and Dimed and Bait & Switch

"Class Matters is a book about real human being, showing how and where they fit in the larger society and astutely decoding the subtleties of class. Reading this book is a unique and original learning experience."—Andrew Hacker, author Two Nations

"The topography of class in America has shifted over the past twenty years, blurring the lines between upper, middle and lower classes; some have argued that the concept of class is irrelevant in today's society. While the 14 pieces in this volume (all originally printed as part of a New York Times series) shed light on a different aspect of class, they all agree that it remains an important facet of contemporary American culture and draw their strength by examining class less through argument than through storytelling. The reader, by following three heart attack victims through very different recoveries, by witnessing the divergent immigrant experiences of a Greek diner owner and his Mexican line cook, by tracing the life path of an Appalachian foster child turned lawyer and a single welfare mother turned registered nurse, or by seeing the world from the perspective of the wife of a 'relo' (a six-figure executive who relocates every few years to climb the corporate ladder), quickly realizes class is defined by much more than income. The collection has the power of a great documentary film: it captures the lives and ideas of its subjects in lively, articulate prose that, while grounded in statistics and research, remains engaging and readable throughout. The result is neither an attack on the rich nor a lecture to the poor, but a thoughtful consideration of class dynamics. Its empathetic take on this divisive subject and straightforward prose style will make the book of interest to a wide range of readers. Recommended."—Publishers Weekly

Class Matters also includes essays by Christopher Buckley, Diane McWhorter,
Richard Price, David Levering Lewis, and Linda Chavez, about their encounters with class when they were growing up.