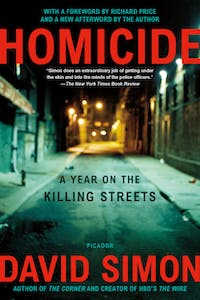 David Simon was the first reporter ever to gain unlimited access to a homicide unit, and in this book he tells the story of his year on the streets of an American city. The narrative follows Donald Worden, a veteran investigator; Harry Edgerton, a black detective in a mostly white unit; and Tom Pellegrini, an earnest rookie who takes on the year's most difficult case, the rape and murder of an eleven-year-old girl.

Homicide was originally published in 1991. This new edition—which includes a new introduction, an afterword, and photographs—revives this classic, riveting account of those who work on the dark side of the American experience.

"One of the most engrossing police procedural mystery books ever written, not only because the crimes and plots and personalities are real, but because Simon is a terrific writer."—Newsday

"Through wonderfully descriptive writing, Simon details the work of fifteen detectives, three sergeants and a lieutenant charged with investigating dozens of Baltimore's 234 murders that year . . . Simon takes readers inside the detectives' lives, describing the frustration of departmental red tape and politics, the bursts of energy and moments of despair . . . For a complete look at what it's like to investigate violence for a living, Homicide is well worth the time."—Orlando Sentinel

"This may be the best true-crime book, the best naked look at murder and cops and crime and life on the killing streets of big-city America in the late 20th century . . . A rich, revealing look at the twisted lives of killers and their victims and at the men who are obsessed with solving the most heinous and baffling murders."—San Diego Union

"As Richard Price says in his new introduction, Simon 'camped out' with the Baltimore PD's homicide unit for a year while researching this no-punches-pulled look at murders and the cops who solve them. The 1985 title was the basis of the award-winning NBC drama of the same name . . . The city of Baltimore saw 234 murders in 1988. Allowed unlimited access to a shift of the city's homicide unit, police reporter Simon chronicles that year. The sociopaths, the crackheads, and their crimes are horrifying, but equal horrors are found in the attitudes of jurors in a case of the shooting and blinding of a policeman and in statistics showing the ultimate legal fates of those apprehended by the unit. Immersing his readers in cases, procedures, politics, and the detectives' personalities, Simon risks being sabotaged by the sheer scope of his account. Still, for those with strong stomachs and the willingness to work to keep the characters and dramas straight, he has produced a riveting slice of urban life. Recommended."—Jim Burns, Pompano Beach City Library, Florida, Library Journal

"We seem to have an insatiable appetite for police stories . . . David Simon's entry is far and away the best, the most readable, reliable and relentless of them all....An eye for the scenes of slaughter and pursuit and an ear for the cadences of cop talk, both business and banter, lend Simon's account the fascination that truth often has . . . Fueled by coffee, cigarettes, and the drive to 'put down' (i.e. close) cases, these heroes keep at it long after ordinary mortals would have lost heart."—The Washington Post Book World

"Baltimore Sun reporter Simon spent a year tracking the homicide unit of his city's police, following the officers from crime scenes to interrogations to hospital emergency rooms. With empathy, psychological nuance, racy verbatim dialogue and razor-sharp prose, he offers a rare insider's look at the detective's tension-wracked world. Presiding over a score of sleuths is commander Gary D'Addario, 'connoisseur of survival' who grapples with political intrigue, massive red tape and 'red balls' (major, difficult cases). His detectives include Tom Pelligrini, obsessed with solving the rape-murder of an 11-year-old girl; Rich Garvey, whose 'perfect year' is upset by a murder case that collapses in court; and black, cosmopolitan Harry Edgerton, a lone wolf, son of a jazz pianist. This hectic daily log reveals the detective's beat on Baltimore's mean streets (234 murders in 1988) to be brutal, bureaucratic and, occasionally, mundane."—Publishers Weekly

Pulling one hand from the warmth of a pocket, Jay Landsman squats down to grab the dead man's chin, pushing the head to one side until the wound becomes visible as a small, ovate hole, oozing...

David Simon's Homicide won an Edgar Award and became the basis for the NBC award-winning drama. Simon's second book, The Corner: A Year in the Life of an Inner-City Neighborhood, co-authored with Edward Burns, was made into an HBO miniseries. Simon is currently the executive producer and writer for HBO's Peabody Award–winning series The Wire. He lives in Baltimore.