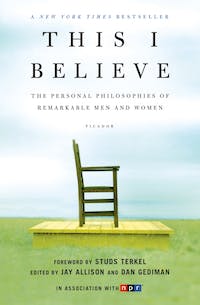 Based on the National Public Radio series of the same name, This I Believe features eighty essayists—from the famous to the unknown—completing the thought that begins the book's title. Each piece compels readers to rethink not only how they have arrived at their own personal beliefs but also the extent to which they share them with others.

The result is a trip inside the minds and hearts of a diverse group of people whose beliefs—and the incredibly varied ways in which they choose to express them—reveal the American spirit at its best.

This I Believe is also available on CD as an audiobook, in both abridged and unabridged editions. Each essay is read by its author. Please email academic@macmillan.com for more information.

"To hold this range of beliefs in the palm of your hand is as fine, as grounding, as it was hearing them first on the radio. Heartfelt, deeply cherished beliefs, doctrines for living (yet none of them doctrinaire). Ideas and ideals that nourish. You can see it in their faces, in the photos in this book. And read it in their words. I'm so proud that NPR helped carry this Edward R. Murrow tradition into a new century. And so glad to have it in print, to encounter again and again."—Susan Stamberg, special correspondent, National Public Radio

"Reading this gives me a feeling about this country I rarely get: a very visceral sense of all the different kinds of people who are living together here, with crazily different backgrounds and experiences and dreams. Like a Norman Rockwell painting where all the people happen to be real people, and all the stories are true. It makes me feel hopeful about America, reading this. Hopeful in a way that's in short supply lately."—Ira Glass, Producer and Host of This American Life

"My father, Edward R. Murrow, said that 'fresh ideas' from others helped him confront his own challenges. This superb collection of thought-provoking This I Believe essays, both from the new program heard on NPR and from the original 1950s series, provides fresh ideas for all of us!"—Casey Murrow, Elementary Education Publisher

"Now, as then, when Edward R. Murrow introduced the idea of This I Believe, this forward-thinking compilation serves as a wonderful antidote to the cynicism of the age."—Daniel Schorr, Senior News Analyst, NPR, and former colleague of Edward R. Murrow

"National Public Radio listeners have been moved to tears by the personal essays that constitute the series This I Believe. Created in 1951 with Edward Murrow as host, the sometimes funny, often profound, and always compelling series has been revived, according to host Jay Allison, because, once again, 'matters of belief divide our country and the world.' Oral historian Studs Terkel kicks things off, and 80 personal credos follow. Essays from the original series are interleaved with contemporary essays (selected from more than 11,000 submissions) to create a resounding chorus . . . Appendixes offer guidelines and resources because the urge to write such declarations is contagious, and schools and libraries have been coordinating This I Believe programs, which we believe is a righteous endeavor."—Donna Seaman, Booklist

"In an age of disinformation, spin, and lies, NPR's This I Believe comes as a source of refreshment and useful disquiet. NPR revived this 1950s radio series quite recently, and this collection draws transcripts from both the original series and its newer version, including some remarkable statements from the likes of dancer/choreographer Martha Graham, autistic academic Temple Grandin, writer and physicist Alan Lightman, novelist and social critic Thomas Mann, economic historian Arnold Toynbee, and feminist writer Rebecca West. Wonderful . . . astonishing to hear and astonishing to read and reread."—Library Journal

"Allison (the host) and Gediman (the executive producer) [of the radio show] have collected some of the best essays from This I Believe then and now. 'Your personal credo' is what Allison calls it in the book's introduction, noting that today's program is distinguished from the 1950s version in soliciting submissions from ordinary Americans from all walks of life. These make up some of the book's most powerful and memorable moments, from the surgeon whose illiterate mother changed his early life with faith and a library card to the English professor whose poetry helped him process a traumatic childhood event. And in one of the book's most unusual essays, a Burmese immigrant confides that he believes in feeding monkeys on his birthday because a Buddhist monk once prophesied that if he followed this ritual, his family would prosper . . . This feast of ruminations is a treat for any reader."—Publishers Weekly (starred review)

Be Cool to the Pizza Dude
Sarah Adams

In Giving I Connect with Others
Isabel Allende

Remembering All the Boys
Elvia Bautista

How Is It Possible to Believe in God?
William F. Buckley, Jr.

The Fellowship of the World
Niven Busch

There is No Job More Important than Parenting
Benjamin Carson

A Journey toward Acceptance and Love
Greg Chapman

The Hardest Work You Will Ever Do
Mary Cook

Good Can Be as Communicable as Evil
Norman Corwin

An Honest Doubter
Have I Learned Anything Important Since I Was Sixteen?
Elizabeth Deutsch Earle

An Ideal of Service to Our Fellow Man
Albert Einstein

The Power and Mystery of Naming Things
Eve Ensler

A Goal of Service to Humankind
Anthony Fauci

The God Who Embraced Me
John W. Fountain

The Willingness to Work for Solutions
Newt Gingrich

The Connection between Strangers
Miles Goodwin

An Athlete of God
Martha Graham

Science Nourishes the Mind and the Soul
Brian Greene

In Praise of the "Wobblies"
Ted Gup

The Power of Presence
Debbie Hall

Natural Links in a Long Chain of Being
Victor Hanson

Talking with the Sun
Joy Harjo

A Morning Prayer in a Little Church
Helen Hayes

The Benefits of Restlessness and Jagged Edges
Kay Redfield Jamison

There Is No God
Penn Jillette

A Duty to Heal
Pius Kamau

The Light of a Brighter Day
Helen Keller

The Power of Love to Transform and Heal
Jackie Lantry

The Power of Mysteries
Alan Lightman

Life Grows in the Soil of Time
Thomas Mann

Why I Close My Restaurant
George Mardikian

The Virtues of the Quiet Hero
John McCain

The Joy and Enthusiasm of Reading
Rick Moody

There Is Such a Thing as Truth
Errol Morris

The Rule of Law
Michael Mullane

Getting Angry Can Be a Good Thing
Cecilia Muñoz

The Making of Poems
Gregory Orr

We Are Each Other's Business
Eboo Patel

The America I Believe In
Colin Powell

There Is More to Life than My Life
Jamaica Ritcher

Tomorrow Will Be a Better Day
Josh Rittenberg

When Children Are Wanted
Margaret Sanger

Jazz Is the Sound of God Laughing
Colleen Shaddox

There Is No Such Thing as Too Much Barbecue
Jason Sheehan

The People Have Spoken
Mark Shields

Everything Potent Is Dangerous
Wallace Stegner

A Balance between Nature and Nurture
Gloria Steinem

Life, Liberty, and the Pursuit of Happiness
Andrew Sullivan

I Agree with a Pagan
Arnold Toynbee

Testing the Limits of What I Know and Feel
John Updike

How Do You Believe in a Mystery?
Loudon Wainwright III

Afterword: The History of This I Believe: The Power of an Idea
Dan Gediman

Appendix A: Introduction to the 1950s This I Believe Radio Series
Edward R. Murrow

Appendix B: How to Write Your Own This I Believe Essay

Appendix C: How to Use This I Believe in Your Community

"At a time when the tide runs toward a sure conformity, when dissent is often confused with subversion, when a man's belief may be subject to investigation as well as his actions . . ."

Listen to William F. Buckley, Jr., founder of the National Review, speak about his belief in God in this audiobook excerpt from This I Believe: The Personal Philosophies of Remarkable Men and Women, edited by Jay Allison and Dan Gediman. Based on the NPR series of the same name, This I Believe features eighty Americans, from the famous to the unknown, completing the thought that the book's title begins.

Jay Allison is one of public radio's most honored producers. He has produced hundreds of nationally broadcast documentaries and features for radio and television. His work has earned him the duPont-Columbia and five Peabody Awards, and he was the 1996 recipient of the Corporation for Public Broadcasting's Edward R. Murrow Award for outstanding contributions to public radio, the industry's highest honor. He was the curator and producer of This I Believe on NPR and he produces The Moth Radio Hour. Before his career in broadcasting, Jay was a theater director in Washington, D.C. He is also the founder of the public radio stations for Martha's Vineyard, Nantucket, and Cape Cod where he lives.

Dan Gediman is the executive producer of This I Believe. His work has been heard on All Things Considered, Morning Edition, Fresh Air, Marketplace, Jazz Profiles, and This American Life. He has won many of public broadcasting's most prestigious awards, including the duPont-Columbia Award.