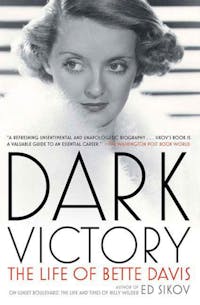 She was magnificent and exasperating in equal measure. Jack Warner called her "an explosive little broad with a sharp left." Humphrey Bogart once remarked, "Unless you're very big she can knock you down." Bette Davis was a force of nature—an idiosyncratic talent who nevertheless defined the words "movie star" for more than half a century and who created a body of work filled with unforgettable performances.

In Dark Victory, the noted film critic and biographer Ed Sikov paints a detailed picture of this intelligent, opinionated, and unusual woman who was—in the words of a close friend—"one of the major events of the twentieth century." Drawing on new interviews with friends, directors, and admirers, as well as archival research and a fresh look at the films, this intimate biography reveals Davis's personal as well as professional life in a way that is both revealing and sympathetic. With his wise and well-informed take on the production and accomplishments of such movie milestones as Jezebel, All About Eve, and Now, Voyager, as well as the turbulent life and complicated personality of the actress who made them, Sikov's Dark Victory brings to life the two-time Academy Award–winning actress's unmistakable screen style, and shows that Davis's art was her own dark victory.

"Mr. Sikov, author of biographies of Peter Sellers and Billy Wilder, is both a respected scholar and a delicious gossip, which makes him perfect to chronicle Davis's bravura life. His research skills are worthy of a truffle hound. (Who knew that Davis had been a Girl Scout leader?) Mr. Sikov studied Warner Brothers studio records and Davis's personal archive at Boston University. He conducted in-depth interviews with her co-workers, lifelong friends and employees. This new material, combined with his own perceptive point of view, makes Dark Victory essential reading for anyone interested in Davis, even though much has already been written about her."—Jeanine Basinger, The New York Times

"A refreshingly unsentimental and unapologetic biography, one in which the inevitable bits of tittle-tattle—about Davis's marriages (four) and affairs (uncounted, but including William Wyler and Howard Hughes) and family life (scathingly depicted in her daughter B.D. Hyman's book, My Mother's Keeper)—don't seem unduly sensationalized . . . Bette Davis is one of those stars it's impossible to imagine Hollywood without. Sikov's book is a valuable guide to an essential career."—Charles Matthews, The Washington Post

"Film historian Sikov steps into the ring with battlin' Bette of Warner Bros. Like many of her biographers, friends, ex-husbands, directors, costars and everyone else within shouting distance of Bette Davis, Sikov finds the diva a tempest. Indeed, the turbulent currents of her personality at times drew the author to 'brooding darkly.' Nonetheless, his passion for her films prevailed, the focus of his book becoming not her life, he writes, but her work. And that he greatly admires. He combs production records of her films, particularly the classics she made at Warner . . . What surprises are the number of bad films-and bad performances-Davis delivered . . . That she remains justly regarded as a major screen artist attests to the talent and tenacity Sikov describes. He makes it clear Davis often had good reason to fight for better scripts, directors and costars, even if doing so meant suspension and financial loss by the hand of Jack Warner. Sikov vividly limns Davis' work in classics such as Dark Victory, Now Voyager and All About Eve . . . he captures the punch of an actress who succeeded in spite of—and because of—herself."—Kirkus Reviews


"The biggest surprise of Sikov's perceptive and superbly written new Bette Davis biography is that there are still fascinating details to be discovered after more than a dozen full-length biographies have been devoted to her since her 1989 death. Sikov follows the volatile actress's long career, specifying how her insecurities and craving for love 'propelled her into the dueling self-medications of liquor and acting.' Even she didn't seem to understand the anger that drove her to 'battle everything she encountered, from Hollywood producers to the tarnished brass doorknobs in her many houses.' Her personal life was littered with broken marriages, affairs, abortions, feuds and neglected family members, but professionally she created dozens of unforgettable performances. Both sides of her life make for compelling reading. Sikov spends two-thirds of the book documenting the grueling production of most of the 52 films Davis made under her 18-year contract at Warner Bros. These illuminating tales mix familiar lore with newly excavated material."—Publishers Weekly

Film critic Ed Sikov is the author of the critically acclaimed On Sunset Boulevard: The Life and Times of Billy Wilder and Mr. Strangelove: A Biography of Peter Sellers. He has taught at Columbia University, Haverford College, and Colorado College, and lives in New York.