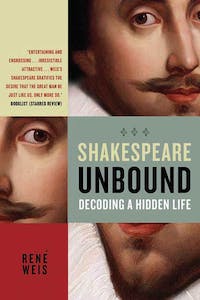 Intimacies with Southampton and Marlowe, entanglements in London with the elusive Dark Lady, the probable fathering of an illegitimate son—these are among the mysteries of Shakespeare's rich and turbulent life that have proven tantalizingly obscure to scholars. René Weis, an acknowledged authority on the Elizabethan period, believes that links between the Bard's life and the poems and plays attributed to his name have been largely ignored. Using a wealth of new archival research and his own highly regarded interpretations of the literature, the author finds provocative parallels between Shakespeare's early experiences in the bustling market town of Stratford—including a dangerous poaching incident and contacts with underground Catholics—and the plays.

Breaking with tradition, Weis reveals that it is the plays and poems themselves that contain the richest clues about the details of Shakespeare's personal life, both at home in Stratford and in the shadowy precincts of theatrical London.

"Weis' intentions in Shakespeare Unbound are strictly honorable. He wants to find the man behind the poetry . . . Weis does forge striking linkages between the work and life—a nifty parallel, for instance, between the poet and fair youth of the sonnets on one side and Falstaff and Prince Hal on the other. He makes a good case that Antonio's leave-taking of Bassanio in The Merchant of Venice parallels Shakespeare's own parting from Southampton, 'the last salvo in a contest of gay and straight sex.' He persuasively argues that Shakespeare's two daughters have been passed down to us as Rosalind and Viola. And like Greenblatt, he dramatizes the sectarian minefield Shakespeare had to negotiate all his life. Born to secretly Catholic parents, young Will would have seen the heads of Catholic martyrs adorning London Bridge and would have known firsthand the climate of state-sponsored Protestant terrorism that marked Elizabethan England. Somehow, he kept a straight course without ceding too much to either side. Hamlet, as Weis writes, is a 'balancing act between the old and new faiths . . . between the Protestant student from Wittenberg and the restless Catholic soul of his father's ghost in Purgatory. Thanks to insights like these, Shakespeare's serenely beautiful lines do buzz with a new life. For the first time, I began to imagine the seven ages of man as the Bard experienced them."—Louis Bayard, The Washington Post

"Weis is thought-provoking from the start . . . he succeeds admirably, offering a welcome corrective to the tendency to dismiss a writer's life from the consideration of his work . . . Weis's study is vivid, accessible and profound."—The Daily Telegraph (U.K.)

"[Weis] digs deep into Shakespeare's works mining new meaning out of old favorites . . . This reprint of last year's hardcover is a fun read, and will make you look at his writings in a new light."—Sacramento Book Review

"Any who harbor doubts as to creativity's vital role in scholarly work need look no further than here. Weis uncorks great casks of knowledge about Elizabethan England and Shakespeare's oeuvre to animate the Bard's rich life and times . . . He sets biographical criticism on its ear by attempting to exhume otherwise hidden events in Shakespeare's life from his work, while simultaneously using known historical occurrences to inform critical readings of the texts. ‘The plays and poems contain important clues to Shakespeare's inner life and to real, tangible, external events he experienced,' Weis writes. ‘There is a cumulative amount of circumstantial evidence that demonstrates beyond doubt that Shakespeare responded in his work to key events of his life . . . to disembody the plays and poems from the life of their author is as counterintuitive as seeking to separate him from the national history of his era.' The author's impassioned investigations lead him to advance all kinds of qualified theories, often preceded by the words ‘might,' ‘may have,' ‘probably,' ‘almost certainly,' ‘must have,' etc. For instance: The sonnets' fair youth, dark lady and rival poet were, respectively, Henry Wriothesley, Earl of Southampton; Emilia Bassano, daughter of a court musician; and Christopher Marlowe, with whom Shakespeare may have had a physical relationship. Also: The glover's son from Stratford was a poacher, father of dramatist William Davenant and, perhaps most intriguingly, lame. (The possible causes of his limp occupy nearly an entire chapter.) Alongside these conclusions, Weis provides engaging historical commentary on the period. A sure-to-be controversial bio-historical feast: Shakespeareans will devour it."—Kirkus Reviews

"Shakespeare's subjective 'I' is everywhere in his work, writes Weis, a professor of English at University College London, who pores over every line for evidence it may offer about the Bard's life. Weis frequently uses words like 'perhaps,' 'might have' and 'possibly,' and he offers some eyebrow-raising deductions from the texts. Shakespeare walked with a limp, for example, and probably played the lame Nurse in Romeo and Juliet. The Bard was bisexual, at least in his emotions, and may well have slept with rival playwright Christopher Marlowe. Some of Weis's convictions are shared by other Shakespeareans: for instance, that the Dark Lady of the sonnets was likely Emilia Bassano, daughter of a Venetian Jewish musician. While Stephen Greenblatt's brilliant and equally speculative Will in the World focused on clues the work gave us about Shakespeare's engagement with Elizabethan society, Weis's conjectures tend to the personal: The Merchant of Venice was a farewell to the triangular relationship immortalized in the sonnets; architectural metaphors in Henry IV indicated that Shakespeare intended to buy a grand new house in Stratford . . . Bardolators [will] appreciate Weis's formidable erudition . . . [on] one of literature's most fertile imaginations."—Publishers Weekly

If there is one character in the later plays with whom Shakespeare is commonly identified, it is Prospero in The Tempest, his last solo play. Prospero sees himself as a magician whose art allows him to conjure up entire worlds of...

René Weis is a professor of English and vice-dean of the faculty of arts and humanities at University College, London. He is the author of The Yellow Cross and Criminal Justice.