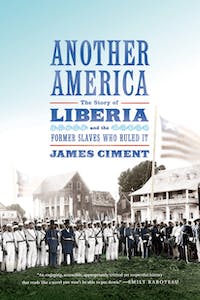 In 1820, a group of about eighty African Americans reversed the course of history and sailed back to Africa, to a place they would name after liberty itself. They went under the banner of the American Colonization Society, a white philanthropic organization with a dual agenda: to rid America of its blacks, and to convert Africans to Christianity. The settlers staked out a beachhead; their numbers grew as more boats arrived; and after breaking free from their white overseers, they founded Liberia—Africa's first black republic—in 1847.

James Ciment's Another America is the first full account of this dramatic experiment. With empathy and a sharp eye for human foibles, Ciment reveals that the Americo-Liberians struggled to live up to their high ideals. They wrote a stirring Declaration of Independence but re-created the social order of antebellum Dixie, with themselves as the master caste. Building plantations, holding elegant soirees, and exploiting and even helping enslave the native Liberians, the persecuted became the persecutors—until a lowly native sergeant murdered their president in 1980, ending 133 years of Americo rule.

The rich cast of characters in Another America rivals that of any novel. We encounter Marcus Garvey, who coaxed his followers toward Liberia in the 1920s, and the rubber king Harvey Firestone, who built his empire on the backs of native Liberians. Among the Americoes themselves, we meet the brilliant intellectual Edward Blyden, one of the first black nationalists; the Baltimore-born explorer Benjamin Anderson, seeking a legendary city of gold in the Liberian hinterland; and President William Tubman, a descendant of Georgia slaves, whose economic policies brought Cadillacs to the streets of Monrovia, the Liberian capital. And then there are the natives, men like Joseph Samson, who was adopted by a prominent Americo family and later presided over the execution of his foster father during the 1980 coup.

In making Liberia, the Americoes transplanted the virtues and vices of their country of birth. The inspiring and troubled history they created is, to a remarkable degree, the mirror image of our own.

"Ciment captures the establishment and destiny of [Liberia], from [its] expectant beginnings, to the Orwellian zeal with which the formerly oppressed in many cases became the oppressors, to the more recent atrocities committed by Charles Taylor. That few Americans today seem aware of Liberia's story, and their own country's essential role in it, gives this book a place in the lexicon that exceeds the mere quality of its research or readability of its text, both of which are considerable."—The Daily Beast

"America's ugly affair with slavery produced an illegitimate child, the nation of Liberia. James Ciment's book is a stunning portrait of both Americas, the superpower and the outcast ‘child'—a nation we fostered, abused, and used, and that now thrives despite it all. Ciment brings a journalist's ‘you are there' voice and a novelist's insight to this history of America reborn in Africa under black rule and misrule. Affecting, at times violent, and filled with unforgettable characters, Another America reads like nonfiction Dostoyevsky."—Greg Palast, author of The Best Democracy Money Can Buy and Vultures' Picnic

"James Ciment has written well about the fantastic, twisted story of the Republic of Liberia, which saw freed slaves from America return to Africa to rule over the natives for more than a century, until they were ousted in a long and brutal civil war. Another America is an engaging, accessible, appropriately critical yet respectful history that reads like a novel you won't be able to put down."—Emily Raboteau, author of Searching for Zion: The Quest for Home in the African Diaspora

"James Ciment's Another America is a rip-roaring popular retelling of Liberian history. It is a whirl of names and places that evokes the conundrum presented by African Americans in Africa claiming to be the spokespersons for blackness. Its lesson—that class hierarchies can derail appeals to racial unity—is a vital one."—Ibrahim Sundiata, author of Brothers and Strangers: Black Zion, Black Slavery, 1914–1940

"With a fistful of good characters and a backbone of research, James Ciment's very readable book makes the story of Liberia, the ex-slaves' country, look like a limb of American history."—Edward Ball, author of Slaves in the Family

"Vivid . . . Enlivened by profiles of some of the early settlers, this is an engaging and accessible account."—Publishers Weekly

ONE
The Black Mayflower


Even to the casual waterfront visitor, there would have been something unusual about the departure preparations of the Elizabeth, an otherwise ordinary-looking three-masted...

James Ciment is an editor and the author of several books on the history of Africa and the Middle East. He lives in Los Angeles with his wife and two children.