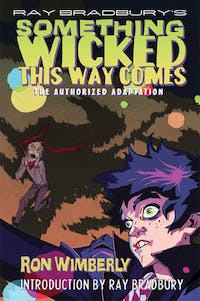 Cooger and Dark's Pandemonium Shadow Show howls into Green Town, Illinois, at three in the morning a week before Halloween. Under its carnival tents is a mirror maze that steals wishes; a carousel that promises eternal life, in exchange for your soul; the Dust Witch, who unerringly foresees your death; and Mr. Dark, the Illustrated Man, who has lived for centuries off the misery of others. Only two boys, Will Halloway and Jim Nightshade, recognize the dark magic at work and have a plan to stop this ancient evil—that is, if it doesn't kill them first.

Ron Wimberly has worked on such DC/Vertigo titles as Swamp Thing and Lucifer. He is the illustrator of the graphic novel Sentences: The Life of M. F. Grimm, which won the Glyph Award for best story and for best cover and was nominated for the Eisner Award for best reality-based title.