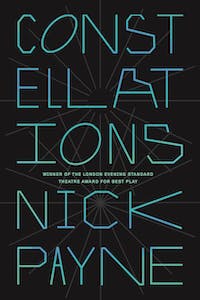 In the beginning Marianne and Roland meet at a party. They go for a drink, or perhaps they don't. They fall madly in love and start dating, but eventually they break up. After a chance encounter in a supermarket they get back together, or maybe they run into each other and Marianne reveals that she's now engaged to someone else and that's that. Or perhaps Roland is engaged. Maybe they get married, or maybe their time together will be tragically short.

Nick Payne's Constellations is a play about free will and friendship; it's also about quantum multiverse theory, love, and honey.

"Who knew that higher physics could be so sexy, so accessible—and so emotionally devastating? Constellations, Nick Payne's gorgeous two-character drama, starring a perfectly matched Jake Gyllenhaal and Ruth Wilson, may be the most sophisticated date play Broadway has seen." —Ben Brantley, The New York Times

"The play may fixate on physics, but the chemistry between the two leads is potent enough to move an audience to tears." —Alexis Soloski, The Guardian

"The pleasure of the evening lies in the way it is both eminently sensible and completely nonsensical. Details accumulate sufficiently to explain character and plot, while throwing us so off-guard as to make questions of narrative moot." —Brendan Lemon, Financial Times

"Short and sweet and strangely haunting . . . Although barely an hour long, this baby bombshell by hot Brit scribe Nick Payne overflows with emotional highs and lows . . . By the end of the play (has it really been only an hour?), we're fully invested in [the characters'] lives. All of them." —Marilyn Stasio, Variety

"Rarely has quantum physics felt as romantic, as lively as it does in Broadway's Constellations." —Elisabeth Vincentelli, New York Post

"British playwright Nick Payne's beguiling Constellations is not only a full-bodied narrative, it's a richly affecting experience. That's thanks to the sensitivity of the writing." —David Rooney, The Hollywood Reporter

"We've been down similar roads before in pop culture, with Groundhog Day being the classic version. But Payne puts his own stamp on the idea." —Joe Dziemianowicz, New York Daily News

"Constellations is smart but not dry; its focus is on the personal and emotional." —Adam Feldman, Time Out New York

"Intimate and cosmic concerns are woven together with such grace that they seem inextricable." —Elysa Gardner, USA Today

"[Nick Payne is] one of the most dazzlingly gifted dramatists of a new generation—sharp, funny, wise, humane." —Vogue

"The nearest I've come across in ages to a play that feels heaven-sent." —Matt Wolf, The New York Times

"Constellations gets into your head and under your skin with an immediacy that sometimes tickles and often hurts." —Ben Brantley, The New York Times

"Spry, funny and ultimately very moving . . . A touchingly original study of a relationship and a meditation on that all too familiar refrain: ‘if only.'" —Sarah Hemming, Financial Times

"Wondrously supple . . . The trick the playwright pulls off is to bring a feather-light touch to weighty themes." —Maxie Szalwinska, The Sunday Times

"Beautiful and brilliant . . . Seldom has a play felt so exhilarating." —Georgina Brown, Mail on Sunday

"I do know the real thing when I see it. And Nick Payne, a playwright previously unknown to me, is at the beginning of a great career." —John Lahr, The New Yorker

"Payne is undoubtedly one of the brightest sparks in our playwriting landscape." —Fiona Mountford, London Evening Standard

"If I see a more ingenious, touching and intellectually searching play than Constellations this year, I will count myself very lucky." —Charles Spencer, The Daily Telegraph

"Not since Mike Bartlett's Cock, so to speak, have I been so exhilarated by a new play . . . Extraordinary." —Paul Taylor, The Independent

Marianne Do you know why it's impossible to lick the tips of your elbows? They hold the secret to immortality, so if you could lick them, there's a chance you'd be able to live forever. But if everyone did it, if everyone could actually...

Nick Payne is the author of the plays If There Is I Haven't Found It Yet, which won the London Evening Standard Theatre Award for best play; Wanderlust; One Day When We Were Young; and Lay Down Your Cross, among others. He is the winner of the 2009 George Devine Award for Most Promising Playwright and the 2012 Harold Pinter Playwright's Award. He is currently under commission with the Royal Court Theatre, the Donmare Warehouse, and the Manhattan Theatre Club. He was born in 1984 and lives in Norwich, England.