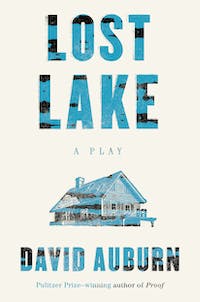 The lakeside rental cabin Veronica has managed to afford is a far cry from the idyllic getaway she and her children were planning. Exhausted from her life as a New York City nurse and by her troubled marriage, Veronica finds herself on vacation without any adult company except for Hogan, the disheveled property owner, who becomes more unreliable by the day. Hogan has problems of his own, problems that Veronica finds herself inevitably—and irrevocably—pulled into.
David Auburn's Lost Lake is a tense, carefully wrought drama about the surprising, complicated friendship formed by two very different people with no one else to turn to.

The main room of a dilapidated lakeside cabin.

VERONICA, a black woman in her thirties wearing a winter coat, looking around. HOGAN, a disheveled white man in his fifties, with her.

David Auburn is an American playwright whose 2000 play, Proof, won the Tony Award for Best Play and the Pulitzer Prize for Drama, and was also adapted into a film. He has received the Helen Merrill Playwriting Award and a Guggenheim Fellowship. He lives in New York City.