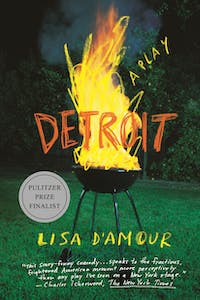 In a "first ring" suburb outside a midsize American city, Ben and Mary fire up the grill to welcome the new neighbors who've moved into the long-empty house next door. The fledgling friendship soon veers out of control, shattering the fragile hold that newly unemployed Ben and burgeoning alcoholic Mary have on their way of life—with unexpected comic consequences. Detroit is a fresh, offbeat, and timely look at what happens when we dare to open ourselves up to something new.

"Detroit is a brilliantly observed piece of art about a particular time and place. That time is now—and by now I mean the current post-recessionary America. That place is a pair of backyards in the suburb of a great American city that has been rocked on its heels."—Chris Jones, Chicago Tribune

SHARON and KENNY are in MARY and BEN's backyard. They sit in newish-looking lawn chairs--part of a set from somewhere like Home Depot. MARY struggles to get a patio umbrella to go up as she speaks....

Lisa D'Amour is an Obie Award–winning playwright and one half of PearlDamour, an interdisciplinary performance company she runs with Katie Pearl. Her work has been produced by theaters such as Steppenwolf Theatre, Children's Theater Company, Clubbed Thumb, the Walker Arts Center, and the Kitchen. D'Amour received her MFA in playwriting from the University of Texas at Austin and currently splits her time between Brooklyn and New Orleans.