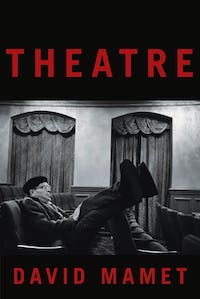 If theater were a religion, explains David Mamet in his opening chapter, "many of the observations and suggestions in this book might be heretical." As always, Mamet delivers on his promise: in Theatre, the acclaimed author of Glengarry Glen Ross and Speed the Plow calls for nothing less than the death of the director and the end of acting theory. For Mamet, either actors are good or they are non-actors, and good actors generally work best without the interference of a director, however well-intentioned. Issue plays, political correctness, method actors, impossible directions, Stanislavksy, and elitists all fall under Mamet's critical gaze. To students, teachers, and directors who crave a blast of fresh air in a world that can be insular and fearful of change, Theatre throws down a gauntlet that challenges everyone to do better, including Mamet himself.

"Mr. Mamet, like Mencken and Thomson, isn't always right, but even when he's wrong, he still makes you think twice. What more can you ask of a critic?"—Terry Teachout, The Wall Street Journal

"A blunderbuss blast against pretentious directors, showy designers and actors who agonise over motivation and their characters' back-stories . . . A bracing and necessary corrective."—Charles Spenser, The Daily Telegraph (UK)

"[Theatre] is the distillation of five decades of significant theater experience. The result is a magnificent and thought-provoking book. It's a book that (and one can imagine the author wincing at the irony) should be required reading for both beginning and experienced actors."—Martin A. David, New York Journal of Books


"In this manifesto, playwright Mamet appears to take great pleasure in attacking age-old theories of acting and directing. By definition, he posits, an actor is a good actor; if the person onstage is not good, then he or she is not an actor. Other targets are books of theory, which Mamet admits he read voraciously when he fell in love with the theater; he now writes, "on reflection, I had (and have) very little idea what they were talking about." Some of his main points are that theater should entertain, rehearsal time should be used to block the play and have the actors understand what they are speaking (rather than feeling), and the job of the playwright is to 'make the audience wonder what is going to happen next. That's it.'"—Susan Peters, University of Texas, Galveston, Library Journal

The Greenroom
The greenroom is that common room between the street and the stage. In coming backstage, one enters the greenroom first. Iâ€™ve heard, over the years, several derivations of the term: The original room was painted green,...

DAVID MAMET is a director as well as the author of numerous acclaimed plays, books, and screenplays. His play Glengarry Glen Ross won a Pulitzer Prize, and his screenplays for The Verdict and Wag the Dog were nominated for Academy Awards. He lives in Santa Monica, California.